There’s nothing worse than commitment issues. When one person is ready to go to the next level, but the other isn’t, then it makes for a toxic situation. Unless people are casually dating, most folks want their love interests to be exclusive. When you get to the point that you don’t want to date anyone else, you expect them to commit to you in return.

Unfortunately, making a long-term commitment isn’t so easy for some people. They have past hurts that play a big part in their future. Some couples are hesitant to tie the knot because they worry about divorce. However, current statistics imply this fear is unfounded.

In 2018, the CDC released statistics that showed that for 2,132,853 marriages, only 2.9 percent ended in divorce. That number equates to roughly one-third of marriages.

As each couple is different, your timeline for a committed relationship will vary. Some couples deeply commit after a few weeks of dating, and typically these are the people who believe in love at first sight. Yet many other couples can date for years without even discussing the issue.

It’s important to realize that you don’t need to be married to be in a committed relationship. Many couples get along better living together than they would be married. Being committed to each other means that you both work to be a faithful, loving couple through the good times and bad.

Why are some men all lovey-dovey until they think the relationship is headed in a serious direction? Men who grew up in broken or abusive homes are often afraid of repeating history, so they steer clear of commitment. For others, an emotional breakup or bitter divorce sours them on the idea of committing to another relationship.

How can you tell if your man is just shy or isn’t interested in upping the ante with you? Perhaps he is using you as a cover for his hushed sexuality, which is a distressing issue itself. If you have your doubts, here are 12 red flags that could reveal your partner’s fear of committing to you. 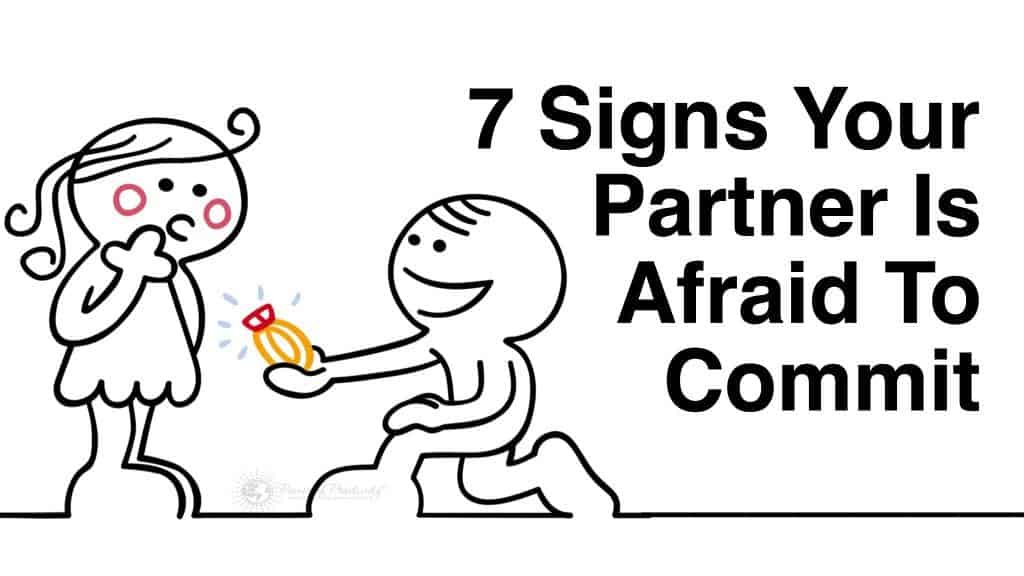 Has the object of your affection been a serial dater, or have her romantic relationships been far and few between? If she’s had few relationships, how long did they usually last?

Your commitment radars should be sounding if your person has a pattern of breaking up with someone one day and falling head over heels in love with another soon after. For these people, love is an endless journey without a destination.

They’re fascinated with dating rituals and the ability to say they are going steady with someone. Unless you both are teenagers in junior high school, the only road to a commitment you’ll have with this guy is a dead end.

There’s a fine line between regular communication and obsession. If he is calling and texting you non-stop and freaks out if you don’t answer right away, he either has control issues or is desperate. Committing to a relationship with matters like these wouldn’t be advisable.

3. Your Partner Keeps Her Distance

When you’re in love, you want to stay in touch with that person regularly. Someone who is genuinely attached to you wants to text or call to see how you are doing. If she rarely calls or texts and your calls go straight to voicemail, she may be telling you that she isn’t ready for a commitment.

If your significant other fidgets or tries to change the subject every time you mention commitment, there may be a problem. People who want a more profound, committed relationship are usually the first to broach the subject. While you don’t want to beg someone to commit, it shouldn’t be a topic of taboo when you’re talking.

Do you feel forced to live in the shadows of his past romances? He probably isn’t ready to commit to you if he can’t move out of the past with someone else. One of the biggest reasons people won’t commit is their heart still belongs to another person.

6. Your Love Discusses Plans or Goals without You in Them

One of the hallmarks of those who are reluctant to commit is a lack of planning or setting goals. Doesn’t it seem odd that you can easily envision a lifetime with her, but she can’t even plan a vacation for you both? If you’re not in her future, then should you be in her presence and waste your time?

7. He Spends More Time with Others than with You

Just because a couple is committed to each other doesn’t mean they should always be joined at the hip. Healthy relationships also allow each person to be an individual, with a variety of interests and friends. You probably enjoy spending a girls’ night out, and he likes to have his buddies over for a weekly poker game.

It’s normal and healthy to socialize with mutual and separate friends, usually the same gender. However, if you are continually playing second fiddle to his buddies, it could be commitment issues. He may not be ready to settle down and realize that he’s not in high school anymore.

8. He Uses the Dreaded Friendship Word

Nothing can be quite as unnerving as devoting weeks, months, or even years cultivating a relationship, just to hear him tell others that you are “just a friend.” Yes, you must be each other’s best friend in a committed relationship, but when he calls you his “friend,” then it implies that you’re just a casual date.

If you’ve been upfront with him about wanting more than friendship, then it takes a commitment from you both. He may try to derail the conversation by assuring you that he cares for you. It shows how differently you and he view the relationship.

9. Her Excuse is that She is Too Picky

Here’s another game of smoke and mirrors that women who are slow to commit often play. Despite your best efforts, she might tell you that she has never been in a committed relationship, she is too picky. While he may think his confession sets your mind at ease, such a statement implies that you’re not good enough.