Our oceans are not just a wondrous powerhouse of beauty and mystery.  They are the most prominent instrument on our planet that absorbs the heat from the atmosphere.  Only about 30% of heat from the sun reflects off of the planet’s surface.

The oceans have absorbed about 90% of the combined heat that we create, and that is from the sun. Had the oceans not absorbed the excess heat generated by us from 1955 – 2010, air temperatures would have risen 97 degrees F.  That absorption comes with a price called ocean acidification. Now,  scientists reveal how it could lead to mass extinction.

The Oceans are sponges that absorb heat

Why is the ocean our most magnificent heat sponge?

Interestingly enough, our oceans before the Industrial Era absorbed about 30% of the heat in our atmosphere.  As the heat increases, so does the capacity for the sea to absorb it.

Scientists since 2000 have been sending robots down to the deep recesses of the ocean to learn more about this absorption and to try to figure out where this heat is stored.  They believe that if they can figure out where it gets stored, they can take some other action to prevent further damage. One thing they have discovered is that the heat is not dispersed universally across the waters.  It tends to collect more in the southern hemisphere.  They have also found that even if we were to freeze the trapped heat, the oceans would continue to heat for decades to a century later.  This is an alarming fact.

What is ocean acidification? And what are the global effects?

Ocean acidification is a chemical reaction of an increase in hydrogen ions created from the absorption of Co2.  This chemical reaction changes the pH of the water, causing it to become more acidic and decreases the carbonate ions and calcium carbonate saturation levels.  There is also a deoxygenation effect or a decrease in the amount of oxygen the ocean takes in.

Researchers and scientists recorded in 2012 that the 4 meters of water closest to the surface has already warmed by .13 degrees per decade for the last 100 years.  According to a report in 2012 by Geophysical Research Letters,  the heat is absorbed by even the deeper areas, 700 meters down.

The effects of this are:

From ocean warming to mass extinction

One of the questions which scientists don’t have empirical evidence for is if the rising temperatures of the ocean and increase in Co2 can cause mass destruction of marine life.  One group of scientists led by Michael Henehan at the GFZ German Research Center for GeoSciences in Potsdam believes they have discovered potential evidence that rising Co2 levels can create mass extinction.  Their report was published in PNAS in October of 2019.

They looked back at the massive extinction of the dinosaurs and the majority of the marine life, which occurred 66 million years ago when the Chicxulube bolide impact occurred during the boundary of the Cretaceous-Paleogene period.  Scientists have been studying this period to determine what was the actual single cause of the mass extinction.  While there are many factors to consider, the one specific cause has not been identified.

This event was triggered by a massive meteor hitting the Earth.   This resulted in enormous volcanic activity, tsunamis, earthquakes, sky blackening from large amounts of debris thrown up into the air, acid rain, sudden winter climate, and a massive increase of Co2 into the atmosphere.   This Co2 was absorbed by the ocean, resulting in sudden ocean acidification.

The cause of this phenomenon

Discerning the actual cause has been complicated additionally due to an ongoing volcano activity called the Deccan basalts traps in India. There, massive flows of lava and release of gases covering nearly 600,000 square miles were continuous.  There is some debate as to the length of time in which this occurred.  Some scientists state this was a sudden explosion, but recent evidence points to it occurring over several years.

It was the discovery of small fossilized shells of foraminifera found in nearby clay that was the focus of this study.  The fossils demonstrated a sudden drop in the pH of the ocean, during and up to a thousand years after the meteor struck. The shells were thinner and lacked calcification.

They discovered that when that meteor hit, it impacted on volcanic rock that contained sulfates and carbonates, crushing it to dust and spreading it throughout the atmosphere.  This poisonous dust fell back down in the form of acid rain, killing a tremendous amount of vegetation, further increasing Co2 levels.

During the 100 to 1000 years, which passed after the impact, scientists were able to learn that the pH levels dropped to by .25 units, possibly more in the immediate decades following.  The scientists are still studying all of the data.

It is essential to recognize that during this time, the levels of Co2 in the air were already higher than current levels. On the other hand, the pH was lower.  The Earth’s atmosphere was different then.  Simultaneously, marine life may have been less susceptible to the Co2 levels before the impact.  Yet, the evidence does point to the fact that such a sudden decrease by .25 units initiated the extinction of marine life. 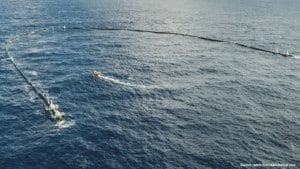 Final Thoughts on Saving the Oceans

The oceans and life contained within are still much of a mystery.  There remains so much we don’t know about it due to the difficulty in going to its depths.  Yet, we do know that it produces half of our oxygen here on Earth. Furthermore, it is capable of progressively absorbing massive amounts of Co2. It also absorbs enough heat to prevent Earth from frying from rising temperatures. Plus, it also contains a plethora of life that we have yet to learn more about.

Scientists have revealed how ocean acidification could lead to mass extinction.  Our pH levels of the ocean are already at .13.  At .25, there is evidence to show that 75% of the marine life could go extinct.  Massive action to save the resource that is working so hard to protect us needs to be taken.  Lowering Co2 levels in our atmosphere to decrease global warming and attempting to find methods to filter it out of the ocean needs to be a top priority.

Not only do the lives of marine life and mammals depend upon it, but so do ours.