“The greatest healing therapy is friendship and love,” Hubert Humphrey once said. And he was correct, in more ways than one. Of course, we all know that spending time with friends makes us feel good. But not as many people know that having supportive friends has been scientifically shown to benefit our well-being and health in a multitude of ways.

A plethora of psychological and scientific research has revealed a significant and essential relationship between having good friends and good health. Therefore, we now know that our friends have a tremendous impact on our health. Research has shown the living in a state of loneliness and isolation can have fatal consequences.

Evidence proves that having quality friendships plays a vital role in promoting better mental and physical health. But what beneficial outcomes are associated with having real friends, in particular? Furthermore, what does a healthy relationship with a true friend look like? Read this article to learn more about the many benefits of true friendship. In addition, you’ll see what healthy friendships look like and how to develop and maintain them.

The people that you surround yourself will affect you, for better or worse. Quality is more important than quantity when it comes to friends. Much research proves that having unhealthy friends and unhealthy relationships with friends can bring you harm. This study, this study, and this one are a few among the studies that underscore the adverse effects of unhealthy friendships.

Thus, having a few real friends that you can count on is much better than having many low-quality friends. But what makes someone a true friend? Here are some of the essential aspects of true friendships:

In addition to improving our lives on a day-to-day basis, our friends can also have a life-saving impact on our health. Here are some of the many ways in which having true friends is beneficial to mental and physical health:

The authors of this study examined how a person’s friends influence their well-being and health. Data revealed that having frequent contact with friends directly links to less stress and better health.

This study assessed the link between social isolation, loneliness, and mortality. Based on an in-depth analysis of 6,500 people, researchers determined that socially isolated and lonely individuals had significantly higher mortality rates.

Another study followed breast cancer patients for 12.5 years to evaluate the impact of close personal relationships on their survival. Researchers found that “increased contact with friends post-diagnosis was associated with a lower risk of death.”

This study examined if, and how, having a supportive network of friends increases happiness. Researchers found that people with a supportive network are happier and that “social support plays a mediating role.” Another study revealed that “friendship quality predicted happiness above and beyond the influence of personality and number of friends.”

This study analyzed the strength of participants’ friendships as a predictor of change in their depressive symptoms. Results revealed that the strength of friendships “predicted decreases in depressive symptoms.” The authors of this impactful study evaluated the effect of social support on depression in individuals who survived childhood abuse. Researchers found that having friends who provide social support “protected against adult depression.”

This ground-breaking study used longitudinal data spanning the course of years to evaluate the relationship between having friends and measures of health. The authors found that “a lack of social connections more than doubled the risk of high blood pressure.” Another study published in Psychology and Aging reveals that loneliness “is a unique predictor” of elevated blood pressure.

This study used longitudinal data to assess the association between social relationships with objective measures of health. Researchers found that a lack of friends increased inflammation to the same degree as physical inactivity. Additionally, the data revealed that “the effect of social isolation on hypertension exceeded that of clinical risk factors such as diabetes.” This research review examined the lives of over 300,000 individuals to analyze the link between social relationships and health. Researchers discovered that people with serious medical conditions who had stronger relationships had a 50 percent higher chance of survival. Having friends predicted survival more than twice as much as exercise did and at the same rate as quitting smoking. Indicating that strong friendships improve overall health.

recent research reveals that interacting with members of different social groups can increase self-confidence. Authors of this review of research discuss how and why intergroup contact promotes enhanced self-confidence among participants.

This study revealed that “overweight youth were twice as likely to have overweight friends.” This effect works both ways. An individual’s willingness to adopt healthy eating and exercise behaviors are highly related to the behaviors of their friends.

9) Assist in a Better Aging Process:

In this pivotal study, nearly 2,761 aging participants were followed for 13 years. The goal of the study was to examine the relationship between social activity and survival. Results demonstrated that social activity was independently predictive of survival when controlling for all individual and health factors. Based on results, researchers drew the following conclusion: “Social and productive activities that involve little or no enhancement of fitness lower the risk of all causes of mortality as much as fitness activities do.”

Another study assessed whether social networks predict better mental health in 1,669 adults aged 60 and older. Results revealed that depressive symptoms were lowest for participants with a diverse network of friends and highest for those without friendships.

10) Can Aid in Smoking Cessation:

A study published in Psychology of Addictive Behaviors examined the relationship between smoking habits of participant’s friends and smoking cessation. Research data for more than 6,000 adult smokers who were attempting to quit smoking was collected over several years. Results revealed that smokers who had friends that quit smoking were significantly more successful in their attempt to quit smoking.

This review of research aimed “to provide an overview of the role of social support in smoking cessation.” Data revealed a significant increase in participants’ ability to quit smoking in interventions that included social support.

Another study showed that the quality of the participant’s relationship with their best friend was positively associated with “mastery coping.”

In an additional longitudinal study, researchers evaluated the relationship between social connections and mortality rates in participants with coronary heart disease. Researchers reported the following findings.

“Those who are socially isolated are at 2- to 3-fold increased risk of death over 5 to 9 years when compared to those most connected.”

The authors of this study examined the role that loneliness plays in the onset and development of dementia. Results revealed that participants who felt lonely developed dementia more often than those who did not.

Another pivotal study followed 823 aging participants for four years to determine if loneliness impacted whether they developed Alzheimer’s Disease (AD). None of the participants had an Alzheimer’s diagnosis at the start of the study. After the study, data revealed that the “risk of AD was more than doubled in lonely persons.”

14) Reduces Relapse Risk in Recovery from Substance Use Disorder:

This consequential study evaluated mediators for the effects that self-help groups had on 2,337 veterans suffering from substance abuse disorder (SUD). The findings demonstrated that “enhanced friendship networks predicted reduced substance use at 1-year follow-up.”

Additionally, another study assessed whether participating in a peer-support community program would reduce relapse rates in individuals recovering from SUD. Results revealed that “a significant reduction of risk of relapse was found in clients who participated in the peer-support program.” 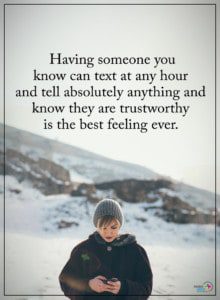 STEPS YOU CAN TAKE TO CULTIVATE AND STRENGTHEN FRIENDSHIPS

There are many steps that you can take to develop and strengthen your relationships with friends. Thus, here are some of the things that you can do to cultivate friendships that will last a lifetime:

This article demonstrates how incorporating positive social interactions with real friends into your self-care routine can improve your health in many ways. Not only that, but having quality friends could save your life.

Of course, it can be challenging to find the time to maintain quality friendships in the busy world that we live in. But it is never too late, and you are never too busy to take the necessary steps to better your life. So you can begin building a great relationship with someone today. Whether it be finding a new friend or reconnecting with an old one, potential friends are everywhere.

Research has revealed that having true friends is as important as anything else you do to take care of yourself. By working to have great relationships with friends, now, you can avoid the multitude of harmful effects of loneliness later in life. Remember, investing time in finding and keeping quality friends is spending time in your own health, as well. So why wait? Get out there and start developing and strengthening your friendships today!