Relationships are, at times, unpredictable. The back and forth banter in a man’s mind greatly influences every decision concerning relationships. It is possible to be in an incredible relationship with a man who shows nothing but adoration for a woman only to wake up to the news that the man is no longer interested in the relationship. Before a majority of men arrive at such a decision, they will have considered every angle to the relationship, most likely without consulting anyone. This is why such decisions leave some women dumbstruck and with a myriad of questions about what could have gone wrong.

Only when a person probes into the issues affecting them does a man begin to open up and reveal what hurts their feelings. Some women laugh it off when a man begins to share their feelings of depression or hopelessness. This is probably because most of the time, men communicate by displaying anger but rarely get into the specifics of the particular issues that hurt their feelings. This article seeks to demystify why men leave women they love.

Here are 6 reasons why men leave women they love:

The Lack of Respect

Men find it incredibly challenging to build a life with a woman who shows little to no respect for them. In the contemporary society, many women misconstrue respect for a man for submission. Respect is not about the weaker or stronger sex and men wish women would understand this fact. Respect is crucial for any relationship to work. Partners should always show respect towards one another and appreciate each person’s uniqueness.

A man cannot feel loved or develop trust in a woman who continually disrespects him. Men often need to feel like their opinion matters. Additionally, they need to feel like the woman they love always has their back. The effect of ingrained respect in a relationship is two-fold. A highly respectful woman inspires a man to take greater risks knowing that he can achieve anything while still enhancing the commitment and tenderness the man has towards a woman.

If a man allows himself to be vulnerable and loves a woman, then he is aware that the woman will see his weaknesses. It is essential for a woman to show that she accepts the man with all his shortcomings, as the lack of respect is one of the reasons why men leave women they love.

Relationships evoke a lot of emotion. It is possible for such emotions to overwhelm a woman to the point that it affects the stability of a relationship. Some men are not equipped to handle high-level emotions and typically become distant due to the intensity of emotions. In contrast, some men can handle such situations. Mature men show a sense of calmness and often avoid unraveling when emotions run high. Maturity in a man instills stability in a relationship.

However, there are instances when even mature men are pushed beyond their limits and end up becoming distant. It is essential for couples to learn how to communicate more effectively to avoid emotions overpowering every disagreement or discussion. Therefore, an emotionally charged relationship is a potential cause of conflict and is one of the reasons why men leave women they love.

Feelings of inadequacy usually go hand-in-hand with the lack of respect. If a woman is overly aggressive and always wants to fix things in the relationship, then a man could feel pressured into thinking he is not good enough. Additionally, overly demanding women, and those who get into the habit of telling a man to try harder (e.g., during intimate moments), can make a man feel trampled on. Men find that the only way to handle such pressure is to run. Men who are always under pressure at home usually feel like they are never good enough and could easily block their hearts and minds. Subsequently, the man completely avoids facing his fears of inadequacy.

Some women drive their men to an abyss of inadequacy by forcing their partners to live above their means and by having too many expectations. For example, if a woman insists on getting a $1000 necklace even when her partner cannot afford it at the moment, then it is hardly surprising when the man begins to look for a way out. It is like cornering a terrified cat. The cat eventually finds a way out even if it means hurting the attacker on the way out.

A Sense of Competition

If a man always seems like he is competing for control in the relationship, then it only seems prudent to leave. A majority of men prefer a relationship where both partners complement one another as opposed to one controlling the other. Men prefer working together and not competing with their partners.

A majority of men often feel unloved if intimacy is left on the backburner in a relationship. If a woman consistently makes excuses not to be intimate with a man, then the man begins to feel dejected and likens the woman to a glorified roommate. The man could start getting misconstrued ideas about a woman’s priorities. Some women dress well for work or night-outs with their girls but fail to put in any effort around their men. This sends the message that the man means nothing in the relationship. 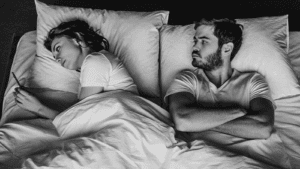 Some women also fall into the habit of diverting their full attention to their children and neglecting their men. Eventually, a man begins to feel sexually and emotionally rejected, and this might be the tipping point in the man’s mind. These are some of the significant reasons why men leave women they love.

A Sense of Loss of Freedom

A relationship characterized by a high number of negative interactions as opposed to positive ones easily dissuades a man from staying in a relationship, and it is likely that the man will seek a form of release or a way out. Healthy and emotionally intimate relationships invoke devotion and commitment in a man while negative interactions stifle a man’s sense of freedom. The man could feel like he cannot be genuine to himself in a bid to avoid arguments.

Great relationships allow partners to be their genuine selves without any fear of judgment. If a man feels like he has to be a different person around his partner, then this is enough to make him leave. A relationship that makes a man feel stifled shows a man that he will only receive negativity as the woman tries to “fix” what is wrong with him. The issues discussed here are the common reasons why men leave women they love.