No one wants to be the partner of someone who only plans to leave a relationship. But a lot of thought has to be put into the act of splitting up from someone you love. This could be why a man might take a while to solidify his decision.

This is why spotting and noticing little signs in advance that a break-up is on the horizon might be useful. It can give a partner time to prepare and process the information, and even open up the floor for discussion. Here are some signs a man is going to leave his relationship.

1.    Everyday talk is dying in the relationship.

If your boyfriend no longer tells you about his day, he could be planning to leave his relationship. Men will enjoy talking to you and getting things off their chest when they are comfortable with you. If he stops thinking of you as someone he just might spend his life with, this can change.

This also applies if he no longer asks about your day. Or he might ask but seem bored or disinterested at your response. He might obviously not pay attention when you speak. These are all red flags to take notice of!

You may also notice that your boyfriend stays more quiet around you. He does not want to talk much, and you end up needing to start and carry all of the conversation. This could be a dead giveaway that this man is going to leave a relationship soon.

2.    His mood is constantly bad around you.

No one wants to hang around a downer, but that’s all he’s been lately. Perhaps he gets snappish around you. Or he seems down or upset when you’re on dates together. He gets angry much more easily than he once did. These are all red flags.

It doesn’t have to be as extreme as him always being sad or angry. You might have also just noticed a drop in mood that has you concerned – especially if that mood change doesn’t seem to have anything to do with other areas of his life.

Every individual goes through five stages of thought when they want to leave a relationship. If he’s at a stage where he’s realizing he’s unhappy, his mood is a pretty good indicator.

A man in love will do crazy things for his partner. He’ll go to events he hates or he’ll ditch a boy’s night to spend the evening with you on the couch. He’ll even tag along to brunch with the girls if you ask nicely enough.

Then, suddenly, getting your boyfriend to go out with you is nearly impossible. He doesn’t want to spend time together on dates. He refuses to go to dinner with your friends. You’re stuck hanging out alone all the time.

The worst part? If he does head out for a night on the town, you’re not invited. Suddenly, he’s only leaving the house to hang out with friends. When he has a big event coming up, he doesn’t add you as his +1. These all point to trouble in paradise; he might leave his relationship.

Since studies show that relationships alter one’s sense of self, this makes sense. If your boyfriend is avoiding outings with you, he might be trying to separate his sense of self from you. This is so he can become his own person again and leave his relationship.

4.    He no longer talks about the relationship’s future.

When a relationship is fresh, you’ll be looking towards the future with positive eyes. If you have a committed, long-term boyfriend, then you’ve likely discussed the future a few times. You may have talked about going on a vacation in a few months. You may have discussed how many kids you’ll have.

Whatever it is, if you’ve talked about it before and he’s reluctant to discuss it now, it’s a sign he wants to leave the relationship. The reason for talking about a future with you might be hard is because he doesn’t see you in his future anymore.

5.    Decrease in intimacy is a sure sign he will leave a relationship.

While not all men are sexual creatures by nature, a huge majority of them are. So when your intimate life with him starts going downhill, it’s definitely time to sit up and take notice.

This might happen in the form of fewer intimate moments and your boyfriend being in the mood much less often. It might happen because intimacy feels more like a routine than an exciting bonding experience. And it might occur when a man stops caring about your pleasure as much as his own.

Whichever way this drop in intimate-positive behavior manifests, it usually means trouble is brewing. When even your flashiest lingerie doesn’t get him going, it might be time to sit down and ask him what the matter is.

6.    He gets annoyed with seemingly small things.

It’s actually possible to scientifically predict when a man is going to leave a relationship. He will begin to associate more negative things with you. This means he might get more irritated by things you do or say, even when they seem very minor.

This might hurt even more if there are things he used to love about you that he now seems to hate. It might be anything as simple as your shiny nail polish. It might be something as heartbreaking as him getting annoyed by your laugh.

Whatever it is, it’ll be obvious, and you’re not going to like it. It’s important to note when this happens that this isn’t your fault. Your mannerisms aren’t inherently annoying. He’s just starting to associate you with negative things, which is a major bad sign.

That new promotion he just got at work? You had no idea he was even gunning for it. The exciting game he’s wanted to play has finally been released? You’re positive he’s never mentioned it.

This is even worse if everyone else seems to know about this news before you do. That means he’s no longer readily including you in a discussion about his plans. This might be because he doesn’t foresee you being around for most of them.

8.    He makes jokes about leaving his relationship.

We all know that men can be jokers. Sometimes, they take their comedic attempts a little too far. But the fact is that there is always a shred of truth in every bit of humor.

Humor and comedy are great for positive thinking, but when they’re about such negative things, they can take a toll on you. They might be jokes about how he’s going to leave you after the month is up. Or, they could be offhand comments that he wants to be intimate with someone else.

A couple of jokes in bad taste don’t necessarily mean it’s all over. It could just be good fun. Still, if those jokes start being told far too often for your liking, it could mean trouble in paradise.

Picking fights constantly is a universally acknowledged bad sign. But fighting too little can be just as bad. It means putting the effort to solve a problem just doesn’t seem worth it to him, since it will all be over soon, anyway.

According to John Gottman, who is a professor of psychology with the University of Washington, stonewalling during a fight signals an unwillingness to talk about the root problem. Why could this be happening? Because he doesn’t see much of a point to it anymore.

10.  He acts immature to make his partner leave a relationship.

Yes, sometimes, on a bad day, a man can act immature. But you know your boyfriend always comes through with a proper apology – until now. 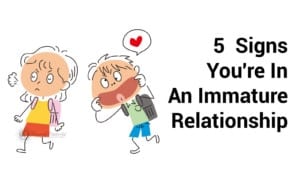 If your man has been a mean or hurtful person towards you lately, he may have already decided that he wants to leave his relationship, but he doesn’t know how. So what he’s doing instead is getting you to dislike him enough to end the relationship yourself.

This reverse psychology can be annoying, no doubt. But this could be a man’s way of trying not to hurt you. He knows breaking up with you directly will cause you pain, so he hopes if you do it, it will sting less on your end.

Final Thoughts On Why Men Leave A Relationship

There are so many signs that could point to a break-up right around the corner. Of course, these are not 100% guaranteed, either. This is because a man might be going through some troubles in his life that lead to these behaviors being performed.

So while it’s good to keep a lookout for the signs a man might leave a relationship, practice positive thinking. Strike up a conversation with your partner instead of accusing him point blank. You never know – there might be a chance you can save your romance!