If you know anything about Japanese culture, you know how deep it is. Indeed, it is a fascinating place with fascinating people. From the Samurai, ninjas, and Geishas, to anime, sumo wrestling, and Zen archery, Japan is a cultural anthropologist’s dream.

The Japanese also possess an incredibly unique mindset, which, due to relations early in the nation’s history, is heavily influenced by Chinese culture. Today, we can see many similarities between both countries regarding customs, philosophy, and religious and familial piety.

In this article, we will focus on four Japanese concepts of mind that are both empowering and transformative. Studied and practiced correctly, these philosophies will allow one to fulfill their highest potential.

Here are four Japanese mind concepts that can help you to maximize your potential. In parentheses is the Japanese word for the term.

Imagine that you’re of a Samurai warrior in war-torn feudal Japan. The whole deal is the horned helmet, thick, hockey-like armor, and razor-sharp katana sword. When fighting with another clan (which was constant in those days), you’re required to stand face-to-face (or rather, mask-to-mask) with another warrior. Furthermore, the opponent is often just as well-trained and just as fierce.

For over six centuries, Samurai often found themselves in such a very do-or-die scenario. How could they: (a) subject themselves to the threat of near-constant death and (b) come out victorious time and time again?

It bears repeating that all Samurai were elite warriors. You couldn’t even think about becoming one unless you’d proven such. Once you get to an elite level – in any endeavor – it’s often the intangibles that determine the outcome.

So, how did the victor find an edge?

Again, the difference is the state of one’s mind.

Fudoshin is the Japanese term for “immovable mind” – a mind of equanimity and imperturbability. It’s a philosophical or mental dimension in Japanese martial arts, contributing to the advanced practitioner’s effectiveness.

There’s a Japanese saying, “When the mindfulness of a samurai warrior fails, he loses his life.” In other words, in the face of death, an individual can not afford to drop their guard.

Okay, so you’ll probably never face the sharp side of a Katana sword. Nevertheless, developing Fudoshin – a keen sense of level-headedness in all situations – is a powerful means of achieving your highest potential and living your best life.

Fudoshin can be applied to pretty much any area of your life. If you have a chore, see it through to the best of your ability; if you told someone, you’d call them back, then call them again, and do so with a mind of evenness. More importantly, it brings a sense of serenity and clarity to every task, large or small.

Mind without Mind (Mushin no shin)

Have you ever seen the movie ‘The Last Samurai’ with Tom Cruise? If so, you probably remember the scene when Cruise’s character, Nathan Algren, is practice dueling with the clan’s most skilled swordsman. Algren, a novice swordfighter, pretty much has no chance. Algren is being handled quite easily by the master (much to the chagrin of a heavyset samurai who keeps losing money by betting on Algren’s skills – an epic and funny scene).

At one point, when Algren is on all fours from the beating he’s taking, a young samurai compassionately runs to him, kneels, and says, “Too many mind.” Algren, confused, asks, “Too many mind?” To which Nobutada, the young Samurai says, “Hai [Japanese for ‘Yes’]. Mind the sword, mind the people watching, mind the enemy. Too many mind… No mind.”

The young warrior was telling Algren that to overcome his opponent. He must clear his mind, which is getting in the way and causing him to lose repeatedly. There is, in other words, no room for thought in battle.

So what does Algren do?

After losing (again), he closes his eyes, relaxes his grip, releases the tension in his body, and acts. The next battle between the master samurai and Algren ends in a draw, which immediately garners the respect of everyone in attendance.

The message: Trust yourself.

If you prepare the best you can, it is unnecessary and counterproductive to put excess strain on your mind and body. The seeds of your efforts take root in the subconscious. So, when the time comes, you can simply act. 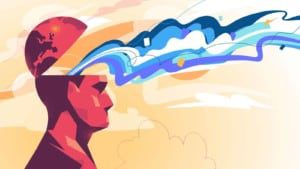 Work is an excellent time to practice no-mind.

Work-related stress is the leading cause of unhappiness for most people. Why? Because we’re always tensing up and stressed out about it. We’re worried about our performance, that promotion, our boss, that pay raise – when all we need to do is act and let things be.

Or how about when we’re stuck in traffic? How nice would it be not to ruminate and give your mind a much-needed rest? So do it. You don’t need to ‘do’ anything.

That’s the beauty of Mushin no shin.

Beginner’s mind, or Shoshin, is a Zen Buddhist philosophy that refers to possessing an open, eager, and non-conceptual mind in any situation, especially when learning a new subject. The underlying rationale for Shoshin is that our brains are filled with preconceived notions that can hamper development and stunt potential.

With a beginner’s mind, we are open to every possibility – every input – without self-judgment or self-limitation. As we get older and accumulated more and more knowledge, however, many of us come to fancy ourselves as know-it-alls.

Two psychologists have donned this misplaced know-it-all mentality the Dunning-Kruger effect. While we’re all guilty of being Dunning-Kruger’s, the result is especially pronounced in the less gifted.

Or, as Justin Kruger and David Dunning put it, “…people who are unskilled…reach erroneous conclusions and make unfortunate choices, but their incompetence robs them of the metacognitive ability to realize it.”

Overestimating one’s abilities not only the individual but society as a whole. Too often, these people end up in positions of undue influence where their ineptitude is capable of inflicting real harm on innocent people.

This is where the Japanese concept of Shoshin can help.

In essence, everyone starts on equal footing. We hold no biases about our ability or lack thereof. When we think this way, we open our minds to more opportunities without being swayed by our often-misplaced perception about what we’re capable of – which is much more than we think. 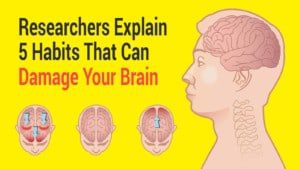 So, when learning something new, empty your mind of any preconceptions. Assume nothing and allow your mind to receive the teachings.

When listening to someone who holds a different opinion than you, use it as an opportunity to expand your horizons by hearing them out with a mind of Fudoshin.

Develop a beginner’s mind, and you will reach your potential.

If you know anything about golfing, you know not to assume anything until the ball is in the cup. Why? Because, out of all the sports, golf is probably the most unpredictable. Even the slightest mistake can sink the entire match. (The writer’s convinced that golf is voodoo disguised as a legit sport.)

The best golfers – and the most successful people – have what is called zanshin, or finishing mind. Zanshin is, quite simply, the laser focus that allows one to finish 100 percent of the task – whatever that may be – without becoming complacent.

In short, it’s finishing what you start. It’s also doing your best in any given task.

In this sense, multitasking is perhaps the single most significant barrier to a mind of zanshin. The mistaken belief that we can somehow attend to two demanding responsibilities at once without compromising quality is both ubiquitous and foolish.

Achieving zanshin is only possible if one is wise with their attention.

Don’t zone out. But don’t be to tight with your mind either. Achieving concentrated attention is a delicate balance between relaxation and focused energy. When you strike just the right balance, that’s zanshin.