Many people call their exes psychos without realizing the weight of the word. If your once-significant other did something like stalk you on social media or blow up your phone with texts whenever you went out with friends, that’s only the tip of the iceberg compared to dating a clinical psychopath.

Don’t get me wrong – anyone who does the things I just mentioned should be out of your life – but many people throw around the word “psychopath” without actually understanding what it means and how horrifying it can be to find yourself trapped in a relationship with one.

Of course, I never thought it would happen to me. People only get involved with real psychos on TV and in movies, right? I thought the same. But in reality, clinical psychopathy is a real and prevalent condition in the United States. A psychopath is wildly cunning and manipulative; most of the ones you encounter don’t fit the bill of a deranged lunatic as portrayed on TV or the media.

Psychopaths make up 1 percent of the population, so the odds of dating one are slim, but it does happen. This is how I realized I was dating a psychopath and managed to get myself out of the relationship.

When I first met Andrew, I was drawn in by his magnetic personality. Outgoing and unwaveringly confident, he approached me at a bar and struck up a conversation without an ounce of hesitation. He told me he was new to the city and enjoying his career as an account manager for a large legal firm. I acted unimpressed, and he saw right through it.

With a wicked grin, he said, “Enough about me, though. I want to know about you.”

“You’re beautiful,” he said, and while the boldness would have put me off coming form someone else, the way he spoke made it impossible not to believe him. “I want to know you,” Andrew said, and so I talked. We exchanged numbers before parting ways, and he texted me the next day asking me out for dinner that weekend.

Looking back, I never would have guessed that the gentleman who held open the door and convinced the waiter to give us a free bottle of wine would turn my life into a living hell over the next nine months.

The Warning Signs I was Dating A Psychopath

A few months into our relationship, I started to worry there was something wrong with Andrew. He was selfish and manipulative, often resorting to ultimatums whenever we got in a fight, but somehow knowing exactly what to say to convince me I was the one at fault.

When we were going through a good period, Andrew was a dream. He was too good to be true. He said all the right things and seemed to be totally enamored by me. But then, his sweet, doting nature would inexplicably shift. He would go from happy to enraged without a moment’s notice, and I was often left shaken and disturbed by the violent nature of his mood swings, all the while trying to calm him down, try to help and figure out what I’d done wrong.

After a while, I began to sense that Andrew’s confessions of love weren’t as sincere as I wanted them to be. When he told me, “You’re the girl I’ve always wanted,” or “I’ve never loved someone the way I love you,” something just didn’t feel right. I wasn’t flattered; I was unsettled, but of course, I couldn’t dare question him. 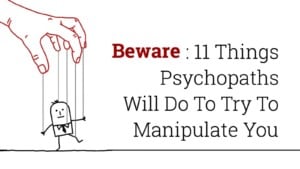 Whenever I thought about leaving Andrew, I felt guilty. I was his only real friend in the city, and while I had a healthy support system to fall back on, he’d be all alone if I broke up with him. Little did I know this in and of itself was a warning sign Andrew wasn’t who he portrayed himself to be.

One of the unnoticed psychopath traits is a lack of closeness to others or genuine friendships. Andrew often evaded questions about his past, and I never pried too much. Maybe he came from a broken family. I didn’t want to upset him by drudging up painful memories.

But psychopaths know how to avoid revealing much about themselves or others; mystery is part of their charm and one of their strengths. Psychopaths prioritize their needs and will always act in their own interest before anyone else’s.

How to End Things

The key is to conceal the fact you’re leaving. You have to gradually cut off contact and emotionally withdraw from the relationship. Psychopaths love a challenge and will go out of their way to rope you back in if they realize you’re trying to leave. Be patient, and be strong.

When things turn nasty, and they will, realize that you aren’t responsible for their behavior and the only response you should give them is an “okay.” Do not react to their retaliations, and avoid being alone with them in case they turn violent.

In some cases, the psychopathic lover will get bored and leave on their own. In my case, I had to detach myself from Andrew to the point that he realized I had lost interest. He brought up the subject of splitting up, and I told him I thought it was for the best.

After we officially ended our relationship, I cut him out of my life completely. I stayed with my parents for a month or so after our breakup in case he went to my apartment. I blocked his number and every profile on social media. I never heard from him again, but a friend told me she saw him with another woman only a week after we separated in the same bar where we first met.

Leaving someone is never easy, and it can even be dangerous when you’re dealing with someone who exhibits psychopath traits. Don’t be afraid to seek professional help if you are trapped in an abusive, manipulative relationship. A therapist can give you advice and help you devise a breakup strategy.

Remember to love yourself before you love anyone else. Breaking up with a psychopathic boyfriend takes courage, strength and a lot of patience, but you can free yourself from the abusive cycle like I did and go on to live a happy, healthy life.