Sociopath: a person with a personality disorder manifesting itself in extreme antisocial attitudes and behavior and a lack of conscience. ~ Oxford English Dictionaries

Although today’s medical community doesn’t officially diagnose someone as a sociopath or a psychopath – at least, not anymore – there are individuals among us who fit the bill.

A sociopath can be defined as someone who “typically has a conscience (“what’s right and wrong), but it’s weak.” For example, someone with a proclivity for stealing may feel a pang of guilt after stealing your wallet – but it’s not enough to stop his or her behavior.

The defining characteristic of both psychopaths and sociopaths is their lack of empathy. They don’t have the ability to stand in someone else’s shoes and understand how they feel.

To clear up a gross (but common) misconception: not everyone who fits the bill of a psychopath or sociopath is violent; some are, but most are not. Both groups of characters have a penchant for taking advantage of people to get what they want.

According to Harvard University psychologist Dr. Martha Stout, as many as 25 percent of the U.S. population possesses sociopathic tendencies.

Think about this: One in every four people you’ve met – or will meet – has at least some characteristics that define a textbook sociopath. Colleagues. Friends. Family. Lovers.

It’s not so strange, then, to date, love, and (God forbid) marry a sociopath. For obvious reasons, a sociopath doesn’t make for an ideal lover. While not all dangerous criminals, sociopaths possess antisocial behavior, or, “actions that harm or lack consideration for the well-being of others.”

Here are 10 behaviors that a sociopath may reveal in a relationship:

The Diagnostic and Statistical Manual of Mental Disorders (DSM-V) notes that one characteristic of a sociopath is “an inflated sense of self.” Sociopaths are extremely narcissistic about their internal and external “gifts.” They’ll prance, brag, showboat, and generally annoy the hell out of anyone unfortunate enough to be in close enough proximity to their overinflated ego.

When you (truly) love someone, the last thing you wish to do is mislead them for your personal gain. In fact, the opposite is true – you’ll willingly sacrifice your happiness for theirs. Sociopaths will try to mislead you, and they don’t care about your happiness.

Sociopaths really don’t commit to anything – personally or professionally. When it comes to decision-making, sociopaths don’t think things through. It’s unsurprising, then, that many-a-sociopath are careless criminals who make dumb mistakes. 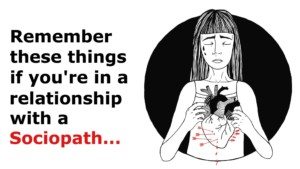 4. They Have No Friends

“If it feels good, I’ll do it. If I can get away with it, I’ll do it.” This, ladies and gentlemen, is the source of sociopathic joy.

“The rules of ______ don’t apply to me.” Yep, just fill in the blank. Unless said behavior carries a high risk of landing the sociopath behind bars (and even then, in some cases), they simply ignore the widely-accepted “social contract.”

Or the “creepy guy stare.” Whatever you may call it, sociopaths have it down. And it’s bizarre. Sociopaths (and other unnatural personality types) use constant eye contact to show aggression or seduction.

M.E. Thomas, a self-described sociopath, writes in Psychology Today: “You would like me if you met me. I have the kind of smile that is common among television show characters and rare in real life, perfect in its sparkly teeth dimensions and ability to express pleasant invitation.”

While there are certainly a fair share of moronic sociopaths with zero social intelligence, some can be aptly described as a master of disguise.

9. Lack of Remorse or Shame

Have you ever said the wrong thing to the wrong person at the wrong time? How did you feel afterward? Guilty? Ashamed? Embarrassed?

Most (all?) of us have been in this situation and felt its lingering after-effects. Sociopaths act in a remorseful, shameful way all the time: they just don’t feel any of the emotions.

Sociopaths don’t respect the rights of others; so we can’t expect them to understand the notion of “personal space.” Perhaps you’ve tried setting boundaries by telling your partner what you like and dislike; what’s acceptable and unacceptable. Chances are that your efforts mattered little.