By Power of PositivityPublished on November 11, 2018Last modified September 20, 2019

Anxiety Disorders (ADs) are becoming more and more prevalent in today’s age. In the United States, they are the most common type of mental illness. Over 40 million adults suffer from anxiety disorders, which is over 18% of the population. And everyone can potentially develop one of these disorders, as they result from a number of different factors including: brain chemistry, personality, genetics, and traumatic life events.

Unfortunately, there is a negative social stigma around many of these disorders, and this stigma, combined with the complexity of anxiety symptoms, results in many people being unaware that their lives are being negatively affected by anxiety. Other people know that they have these disorders, but due to the stigma, avoid treatment. Only 36% of people with anxiety are receiving treatment.

It is important to note, though, that if you believe that you or a loved one is suffering from a mental disorder, it is best that you consult a licensed physician. Many mental disorders are quite serious and even life-threatening, so their treatment should not be taken lightly.

What is an anxiety disorder?

An Anxiety disorder is a form of mental illness that is categorized due to their prevailing symptoms of anxiety and fear. Anxiety is a natural human instinct known as the “fight or flight response,” and it functions as a psychological defense mechanism towards future events. Anxiety is not to be confused with fear, which is a natural reaction to events that are currently occurring. In itself, anxiety is not a bad thing.

However, anxiety associated with a mental disorder causes this natural human response to manifest during unnatural times, causing overwhelming worry. These disorders can cause a massive strain on people’s lives, but oftentimes, people don’t know what’s actually causing them to suffer.

Here are 15 signs that you may have an AD

The most obvious sign that someone is struggling with anxiety is excessive worrying. This worrying is related to things that are both significant and insignificant to the person. Worrying is natural, but if someone is worrying too much, they may have a disorder.

So, how much worrying is too much? Experts say that if someone is experiencing worrying thoughts most days for a period of six months, they may have Generalized Anxiety Disorder and should seek consultation from a licensed physician and possibly begin anxiety treatment.

Many people have trouble sleeping. Whether it’s trouble falling asleep, or trouble staying asleep, the cause of sleeping problems could be a number of factors. These problems are often exacerbated during highly stressful times.

But trouble sleeping may also be caused by anxiety, and can be helped through anxiety treatment. Lying in bed worrying commonly manifests sleep problems caused by anxiety. Some of this is natural, but too much could be a sign of a problem!

Fear is another natural human instinct that is used as a psychological deterrent to things that can hurt us. Humans are scared of things that might cause harm to us. But some specific fears, called phobias, are irrational fears that do not have protective value.

These irrational fears can be extremely disruptive to people’s lives. Examples include fear of bridges, public speaking, and fear of things that are impossible such as your arms falling off.

Though extreme, some phobias are so specific that they do not have a significant impact on people’s lives. Either way, phobias can be a sign of a more serious disorder.

People with disorders causing anxiety often experience constant stress in their lives. This stress causes involuntary physiological reactions such as flexing muscles, squeezing your fists, or clenching your jaw. This constant muscle tension can negatively affect someone’s life, as it is uncomfortable and tiring.

Though many of the actions associated with muscle tension are normal in small quantities, constant muscle tension may be a sign that a person is suffering from anxiety.

As we discussed earlier, though feelings of anxiety originate in the brain, they can cause involuntary physiological reactions throughout the body. Another reaction common to ADs is chronic indigestion.

Like most symptoms of anxiety, chronic indigestion does not necessarily indicate that you have a disorder. Talk to a doctor if you are experiencing this symptom.

One class of mental disorders deals exclusively with social situations. Social Anxieties (SAD) are quite common and can manifest in a number of ways. Most commonly, the anxiety is caused by normal situations such as having a meal with people, or just talking to someone the person does not know.

In social situations like these, people with SAD cannot overcome the feeling of anxiety. They feel like everyone is watching them, which compounds the problem, and they may begin to exhibit symptoms such as sweating, shaking, trouble talking, and nausea.

Panic attacks are characterized by overwhelming feelings of panic and fear and can cause heavy breathing, trouble breathing, chest pain, elevated heart rate, sweating, and chills. Panic attacks commonly make a person feel as though they are about to die, and so they are very serious.

If you or someone you love has experienced these feelings, and you think it may have been caused by a panic attack, you should seek medical help.

Another class of ADs is called Obsessive Compulsive Disorder (OCD). OCD manifests itself in different ways in different people, but is characterized by uncontrollable and irrational thoughts and actions.

One such irrational compulsion is perfectionism. Being unable to stop yourself from modifying projects, fixing papers, or arranging books are just some of the ways perfectionism can manifest.

Also commonly associated with OCD, compulsions are uncontrollable actions someone does, often repeatedly, to the point of negative affect on their lives. These compulsions are often referred to as rituals, and can include checking to see if doors are locked dozens of times, excessively washing hands, or touching every tree you pass by.

Though some people experience natural urges to do things, compulsions that characterize ADs are abnormal and cause strain on peoples lives.

Self-doubt and constant questioning is another symptom of OCD. It commonly manifests around what is most central to a person’s identity. For example, someone suffering from OCD who has just gotten married may find himself or herself constantly doubting whether or not they love their spouse.

Self-doubt is a normal occurrence for many people, but if it gets overwhelming, it maybe a sign of OCD.

Post-traumatic stress disorder (PTSD) is most commonly associated with soldiers returning from battle, but it can result from any type of significant trauma. Though it is technically in its own class of mental disorders, PTSD shows many symptoms of anxiety and some ADs exhibit similar symptoms.

One symptom is flashbacks, where the person relives the event that caused them trauma. These are violent memories, and reliving them is uncomfortable and terrifying; flashbacks warrant serious medical attention and possible anxiety treatment.

The fear of public speaking is one of the most common in the world. As such, it is not uncommon for someone to get nervousness before speaking in front of a group of people, or being in other situations that require them to stand before a crowd.

Stage fright associated with overwhelming anxiety manifests distinctively different from normal stage fright, though. If someone is inconsolably afraid of normal, public speaking or a similar situation, it could indicate the person is suffering from anxiety.

ADs often manifest in ways that affect other people as well. People suffering from anxiety will often experience overwhelming feelings of agitation, which they take out on others.

Though it is normal for people to get angry, excessive agitation may be a sign of a more serious problem and warrants further examination. It can indicate that the person is experiencing anxiety associated with a disorder and may require anxiety treatment.

Frequent feelings of restlessness are a possible indicator of several ADs. This symptom is especially common in children and young adults. Someone who is experiencing restlessness may describe it as feeling “uneasy,” say they “can’t sit still,” or that they feel trapped. 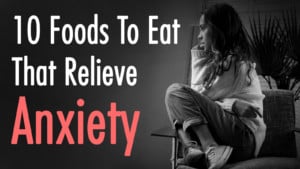 Restlessness does not occur in all people experiencing ADs, nor does it itself indicate that a person is experiencing anxiety, but it is certainly a red flag. The chances that feelings of restlessness are associated with a mental disorder are increased if those feelings occur in the majority of days for a period of at least six months.

Difficulty concentrating is most commonly associated with conditions that affect learning, such as ADHD. But, it can also be a sign of anxiety.

In fact, almost 90% of people suffering from GAD report having trouble concentrating. This effect is compounded in the large number of people who have anxiety and ADHD.

This combination of mental disorders is especially troubling for people, as their inability to concentrate tends to enhance their feelings of anxiety. If you or someone you love has significant difficulty concentrating, talk to a doctor – it may be a sign of a more serious issue.

Things To Try When Nothing Else Has Worked

If these symptoms describe you currently, you’ve probably tried to get rid of them yourself. Many of these symptoms put significant strain on your life, so it’s understandable to try to fix it yourself. Some common methods of self-treating symptoms of anxiety are meditation, diet change and exercise.

Oftentimes, though, these methods will not be enough. When none of these at-home treatments get rid of the symptoms you’re exhibiting, you need to seek professional medical attention. Anxiety is a serious problem that warrants serious attention.

Your doctor or therapist will determine the cause of your symptoms and give you its name. Whether it’s GAD, OCD, or some other disorder, knowing that your symptoms are caused by a mental disorder will help you to fight them off. This process is known as “labeling.”

The doctor will also be able to help you identify the circumstances that typically cause your anxiety symptoms, which will help you avoid them. If all else fails, your doctor may prescribe you a prescription to take to combat the symptoms of anxiety that you’re experiencing.