“All behavioral or mood disorders – including depression, OCD, ADHD, and addiction – have some neurochemical components, but sufferers can still work to overcome them.” – Jeffrey Kluger

Obsessive-compulsive disorder (OCD) is a mental or psychiatric condition that covers intrusive, repetitive, and stubborn actions and thoughts. This mental health disorder can interfere with your daily function and relationships. The obsession and compulsion may be intense for some people who might need therapy and medication to manage their condition. Here are some reasons that explain the causes of OCD, according to science:

Here Are 6 Causes of OCD And How to Fix It

1. You have inflammation in the brain.

People with brain inflammation have a 32-percent chance of manifesting OCD symptoms, according to a study found in the JAMA Psychiatry. Inflammation develops as the body responds to any injury or infection coming from various factors. Experts said that medications that specifically target brain inflammation might help curb OCD symptoms. A more proactive treatment plan, however, might involve therapy that will reduce the inflammation from recurring.

There could be a genetic component to obsessive-compulsive disorder. People with first-degree relatives who have OCD are four times likely to have the condition, according to psychology professor Jessica Grisham of the University of New South Wales via New Scientist. However, other factors might also impact the development of OCD in those who could be genetically inclined to have it. If one of your parents has obsessive-compulsive disorder, it might sometimes not automatically manifest in you, unless perhaps you’ve had a traumatic experience.

3. You’re vulnerable to what’s around you.

If it’s in your genes, then you’re a lot more vulnerable to having OCD from the triggers in what’s around you. The “right” condition or applicable circumstance – such as chronic stress, a disease or infection, or a traumatic loss – could activate the symptoms.

4. You develop OCD as a behavioral response to stress.

Your brain might start associating people, places, and events as stressors and this association could trigger a compulsion or obsession. For instance, you generally do not have any problems shaking the hands of new people you meet. However, you might have experienced a harrowing time at the hospital when you were so sick, so your brain might then learn to associate handshaking with the spread of germs. This experience may trigger your obsession about cleaning your hands many times over after touching a stranger or a compulsion not to shake someone’s hand at all.

5. There are chemical abnormalities in your brain.

For years, scientists have theorized that people with obsessive-compulsive disorder have lower levels of certain chemicals in the brain, such as serotonin, hence the cells can’t function effectively. A study in the journal Pharmacology & Therapeutics cited that the lack of glutamate in the brain might also cause OCD development. This chemical compound is vital to learning and memory. When damaged, this chemical can render the cells ineffective as well. Therefore, the cells won’t be able to properly pass signals from each other.

6. You’ve been raised with “dysfunctional” beliefs.

As you grow up to understand how the world works, you form knowledge and opinions that make up your belief system. However, your exposure to things, places, and events impact how these beliefs formed in your system. If you’ve been exposed to a distorted, inaccurate and dysfunctional environment, your life could be more stressful and demanding. People who were brought up with dysfunctional beliefs are more inclined to OCD, according to a study in the Journal of Anxiety Disorders. However, experts also learned that this doesn’t apply to all OCD patients. 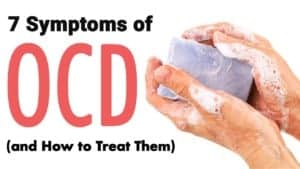 How to Overcome OCD

In order to fix or manage OCD, you’ll need a proper diagnosis from a professional first. Other mental and neurological disorders show similar characteristics as obsessive-compulsive disorder. Therefore, you’ll want to rule out these conditions before you start with any treatments.

Your doctor will likely prescribe antidepressant medications or selective serotonin reuptake inhibitors (SSRIs) so you can manage the symptoms. You might also be asked to undergo cognitive behavioral therapy (CBT), as relying on medication alone will not protect you from a relapse.

Remission from OCD does not happen rapidly, especially if the symptoms affect your daily routines and functions. However, these treatment options can positively impact the quality of your life as you learn to control the symptoms.

Experts regard OCD as a chronic condition similar to asthma or diabetes. But a good treatment plan will help you properly deal with OCD throughout your life, even if you’re off medications.

Understandably, some people, despite trying hard to stick to positive thinking, might be hesitant to get a proper diagnosis and treatment ocdplan for OCD because of the stigma surrounding mental health disorders. However, delaying a professional consult might worsen the symptoms and continue to disrupt your productivity. Along with the treatment plan, consider changing your lifestyle to achieve a state of balance. Eat right, sleep well, exercise regularly, and avoid stress in your work and relationships.