What is the vagus nerve?

“It’s almost like a yin and yang. The vagal response reduces stress. It reduces our heart rate and blood pressure. It changes the function of certain parts of the brain, stimulates digestion, all those things happen when we are relaxed.” ~ Mladen Golubic, M.D., Cleveland Clinic’s Center for Integrative Medicine

In simple terms, the vagal response is stimulation of the vagus nerve. The vagus nerve extends all the way from your brain stem, to your tongue, vocal chords, heart, lungs, and internal organs.

Stimulating this large nerve also helps to quell anxiety. Intriguingly, yoga masters have been using the vagal response in “breath work called pranayama, (as) a regular part of yoga practice” for centuries. (Rings a bell doesn’t it?)

According to Dr. Mladen Golubic, an internist at Cleveland Clinic’s Center for Integrative Medicine, regularly practicing vagal stimulation can reduce anxiety and stress –and help mitigate or neutralize conditions such as asthma, chronic obstructive pulmonary disease, and cardiovascular disease.

Dr. Golubic’s assertion should bring us all a measure a comfort; in that, to a large degree, our mental and physical health is in our control. “There are studies that show that people who practice breathing exercises and have those (abovementioned) conditions – they benefit,” says Golubic.

Judi Bar, a yoga teacher at the Cleveland Clinic, concurs with Dr. Golubic: “Our breaths will either wake us up or energizes us. It will relax us, or it will (balance ) us.”

The science behind the vagal response

The amygdala (um-ig-duh-luh), which is part of the sympathetic nervous system (SNS), gives us the lovely “fight-or-flight response” that puts us on edge. Think of how you feel when some jerk cuts you off in traffic, or while waiting on hold for 20 minutes. Yep, that’s the fight-or-flight (‘FOF’) response.

While the FOF response has kept our species alive, it’s also a pain in the you-know-what. We get pissed off over the smallest things because of two almond-shaped glands at the base of our brain. Individuals with mental health problems, such as chronic anxiety and depression, are constantly on-edge because of amygdalar activity.

When we can’t seem to relax, it’s time to engage the parasympathetic nervous system (PNS) by stimulating the vagus nerve.

While it may sound complicated, it’s not too difficult – and becomes much easier with regular practice. The most important thing when stimulating the vagus nerve is to control your breathing. Heavy breathing and a spike in blood pressure are the byproducts of SNS fight-or-flight activity.

“Deep breathing is a great example of that,” says Dr. Golubic. “We have a certain space where we can control breathing. We can extend the inhalation and the exhalation. So by those practices, we can activate the parasympathetic nervous system.”

“The best practice is a complete breath which involves diaphragmatic breathing.”

The diaphragm is a dome-shaped, muscular wall that separates the lungs from the stomach area. It plays a significant role in breathing, as it is responsible for inflating the lungs.

The problem is that we don’t engage the diaphragm enough while breathing; instead, we tend to breathe shallowly (“chest breathe”).

There are significant disadvantages to not breathing with our diaphragm. By not engaging the diaphragm, our bodies do not receive the optimal amount of oxygen – something that affects our mind and body.

When we are stressed or anxious, we almost always chest breathe. However, stress and anxiety are times when we need diaphragmic breathing the most. 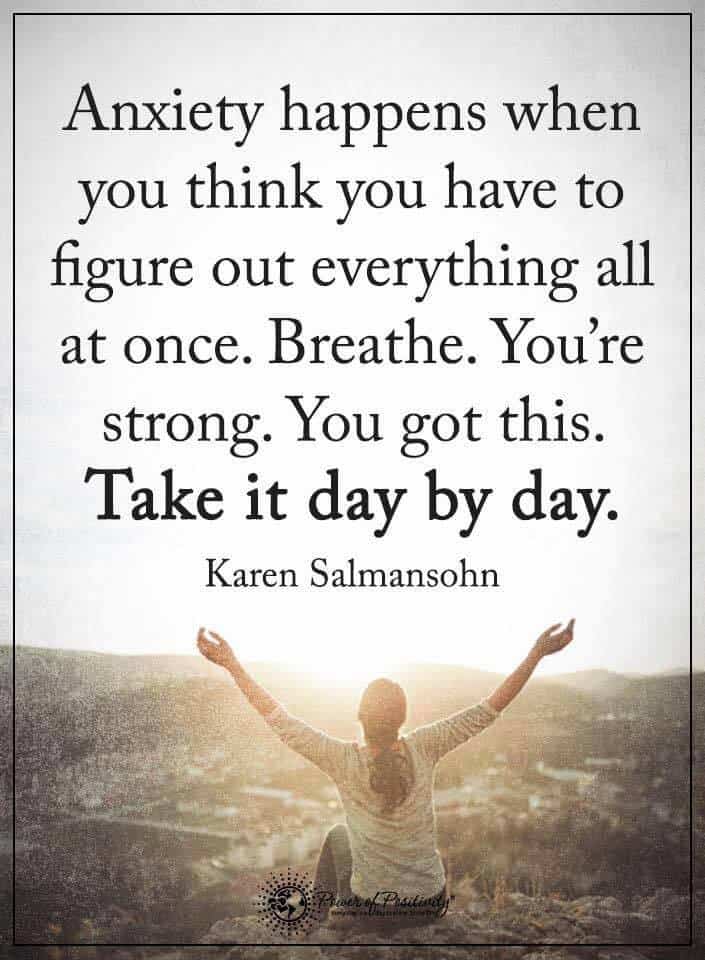 Here’s what to do!

Enough science-ey stuff. Let’s get to the chase.

Here’s what you need to do:

1. “Lie on your back on a flat surface or a bed, with the knees slightly bent (you may use a pillow underneath the knees for support). Place one hand on your upper chest and the other just underneath the rib cage – this will allow you to feel your diaphragm as you breathe.”

2. “Breathe in slowly through the nose so that your stomach moves out against your hand. The hand on your chest should remain as still as possible.”

3. Tighten your stomach muscles; let them fall inward as your exhale through pursed (tightly pressed) lips. The hand on your upper chest should remain as still as possible.