Next to a diagnosis of cancer, perhaps the most feared diagnosis many people carry in the back of their minds is Alzheimer’s Disease. You may also know it as Alzheimer’s Dementia.

According to the Alzheimer’s Association, Alzheimer’s Disease affects 5.8 million Americans as of 2019.  This is across all age groups.  Approximately 200,000 are under the age of 65 with what is labeled as Early Onset Alzheimer’s disease.  From the original number of 5.8 million diagnosed with Alzheimer’s, an astounding 81% of them are aged 75 and up.

In comparison, people ages 65-74 only make up about 3% of the statistics.  The population of Americans reaching age 75 will increase from 55 million to 88 million by 2050. That makes for staggering numbers and a reasonable concern for your elder years.  However, some of the markers begin to show themselves in the brain as much as 20 years before diagnosis. Thus, taking steps to decrease your risk only makes sense.  A neurologist explains four ways to lower your risk of Alzheimer’s Disease.

What is Alzheimer’s Disease?

Alzheimer’s has become almost synonymous with aging that people may forget that it is not a normal part of aging. Also, dementia is not the same as Alzheimer’s.  Dementia is a symptom of Alzheimer’s, or it can stand alone as its disease.

Alzheimer’s is a degenerative brain disease. Furthermore, it begins its battle on your brain upwards of 20 years or more before you have significant symptoms.  During that time, our brain can compensate for the gradual deterioration until the damage has become severe enough that symptoms such as lack of memory or language difficulties occur.

How Alzheimer’s destroys the brain

Our brain transfers information via neurons and branches of the neurons with synapses used to connect them all together.  The data is like a spark of static electricity from one neuron to another neuron.  This process is what allows for our memory, thoughts, sensations, skills, emotions, and motion.   With Alzheimer’s disease, two proteins attach themselves to the neurons.

Beta-amyloid plaques attach to the outside of the neurons.  They are believed to cause cell death by preventing the neurons from being able to communicate with each other at the synapses.

The second protein is called tau tangles, and it attaches to the inside of the neurons. It is believed to essentially create the starvation of the neurons by blocking the ability of nutrients and other molecules to get in.

As the beta-amyloid plaques increase to such a high level, they push the tau tangles to spread throughout the brain.  This then triggers the microglia in the brain.  Microglia are designed to rid the body of toxins and are the janitors of the dead cells.  An abundance of the two proteins become viewed as a toxin, creating inflammation as a response from the microglia attempting to decrease their numbers.  As the microglia is overwhelmed, more brain cells die off, and the brain begins to atrophy.  At the same time, the brain is unable to use glucose, which is its primary energy source, furthering the damage.

This decline continues as the plaques and tangles spread to include the various function of the brain.  It can affect the person’s personality, create confusion, noticeable memory loss, including time and place, depression, and eventually, in the final stages, semi-automated body functions begin to fail.

What are the symptoms of Alzheimer’s disease?

The symptoms of Alzheimer’s disease can be similar to normal aging mental decline except to a much higher degree.  It is not unusual for anyone to forget where they placed something.  The difference is that an average person will be able to retrace their steps that day and find the lost item.  An Alzheimer’s patient will have no recollection of their day at all.  Here are some of the other symptoms of Alzheimer’s:

1 – A significant decline in memory.

An individual with Alzheimer’s will have difficulty remembering new information, dates, events, or needing a constant repeat of other information that typically they were capable of handling.  You may find them write themselves notes. Or, they might need friends and family to remind them about normal daily things.

2 – A decreased aptitude for problem-solving

Problem-solving, working within a plan, or ability to work with numbers decrease. Suddenly they have problems paying bills, doing simple math, counting money, or figuring out how to double a recipe.

3 – Time and place are confusing.

They may have difficulty reading, identifying colors, and judging depth or distance.

They may be unable to find the right words often or substitute other phrases to represent an everyday item.  They may start a conversation and then forget what they were saying or stop talking as if they didn’t remember they were speaking.

More susceptible to buying sprees or telemarketers. They become forgetful about bathing, brushing, and flossing, or other self-care habits.

As they become more aware of their deficiencies, they begin to withdraw from family and friends.  They are no longer able to follow conversations, TV shows, and do their hobbies.

As their world becomes more of a scary place, they become overly suspicious, hostile, angry, and confused.

What are four ways to lower your risk of developing Alzheimer’s Disease?

A study recently published in “Alzheimer’s and Dementia: The Journal of the Alzheimer’s Association.” provides hope towards the potential improvement of brain functions and a decrease in Alzheimer’s symptoms within 18 months of following a specified plan.  This plan involves diet, exercise, and doing cognitive exercises.

The study was organized and written by Dr. Robert Issacson, a founder of the Alzheimer’s Prevention Clinic at NewYork-Presbyterian and Weill Cornell Medical Center. He and his research staff conducted a study by asking clients of his to volunteer.   They had 154 patients between the ages of 25-86 volunteer.

These patients were non-symptomatic but had a history of Alzheimer’s in their family. And, they already showed a decline in cognitive function on specific tests but not any clinical symptoms of dementia or Alzheimer’s.  Thirty-five of the volunteers displayed the beginning stages of Alzheimer’s or Mild Cognitive impairment.  MCI means they show strong signs of cognitive difficulties that have not reached a level of daily impairment.

All of the volunteers underwent a battery of family health questions,  medical, and cognitive testing to ascertain a total healthy picture as well as determine if they were displaying cognitive impairment leaning toward Alzheimer’s.  Those who did display cognitive impairment, in some degree, underwent further evaluations.

Researchers gave each of the members a personalized, specialized list of 21 activities to follow.  An emphasis was placed on nutrition and physical activity, yet that portion of the plan was designed specifically for each individual.  Some of the details on the list that the group monitored was:

The results were impressive.  The individuals diagnosed with mild cognitive impairment who followed at least 12 of the 21 activities demonstrated an improvement in memory and thinking skills 18 months later.

For those with MCI who did not follow at least 60% or 12 of the 21 activities, they showed no improvement and declined in memory and thinking.

The individuals who had a family predisposition to Alzheimer’s but were not displaying any symptoms also had marked improvement regardless if they did 60% or less of the list.

The medical field has already been doing studies to attempt to ascertain the role nutrient or diet and exercise may play on Alzheimer’s, but this is the first study to personalize the diet and exercise per the patient’s health needs or difficulties.   The other two factors which this study ruled as being critical toward the delay of Alzheimer’s are sleep and learning something new.

This study may not be a cure, but it does point to a method to decrease the cognitive decline during those 20 plus years before the sharp onset of symptoms. 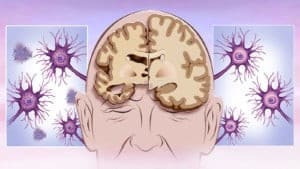 Researchers still search for a cure for Alzheimer’s Disease. Therefore, every step doctors and scientists can take to decrease its severity or delay its onset is a blessing to the patients and their families.

Neurologists explain the four ways to lower your risk of Alzheimer’s, and it all boils down to a proper diet, exercise plan, sleep, and keeping your brain learning something new.   Mixing that with potentially new medications and an accurate early blood testing may give hope to the millions in the next 30 years of limiting the devastation that Alzheimer’s can cause.