Meditation may help you live longer. What a claim. Yet, it’s powerful stuff–and true, according to scientists from three respected institutions.

Sit back a moment and think about your daily life.

You open your eyes and slowly begin to rotate your body out of a nice, warm bed. Already, your brain is firing off thoughts about where you need to be, when you need to be there, and how much stuff you need to get done today.

As your day progresses, you experience a litany of distractions and have to discipline yourself to stay on task. This is not easy to do with ringing phones, loud co-workers, meetings, email, conference calls…whew!

This constant barrage of information overload and distractions takes its toll on our brains and overall mental and physical health.

People who practice meditation often say that it’s the answer to these and other problems. They swear that meditation keeps them healthy both mentally and physically. Does it? What do scientists and doctors have to say?

Let’s first delve into some basics on meditation.

First, it’s important to discuss what meditation is and is not.

Meditation is simply mindfulness and being present. It is the observance of your thoughts. It is being attuned to your breath, mind, and body. Furthermore, the practice is an ongoing process and one that nearly everyone can learn.

Meditation is not the elimination of your thoughts. It is not a religious practice (although you can certainly meditate on your God, religious texts, etc.). Nor is it something that is going to feel comfortable and natural the first time. In short, nobody arrives here on earth a naturally-talented meditator.

What Science is Saying

Scientists are trained to be objective and base their findings on evidence. Experiments and studies are closely monitored and data is precisely recorded. It has to be this way for a scientist’s findings and work to be taken seriously by his or her peers.

So, when numerous scientific studies conclude that there are many positive benefits to meditation, it’s a big deal.

And when the American Medical Association – the largest association of physicians in the United States – says that meditation is a beneficial practice, it’s a big deal.

1 – Harvard scientists state that meditation can shape your brain

Neuroscientists at Harvard University shared results that prove that the brain can be physically changed with meditative practice.

In the study, the team took anatomical magnetic resonance images (MRIs)  of 16 healthy participants before and after they underwent an 8-week Mindfulness-Based Stress Reduction (MBSR) program. This program is one of the most widely-practiced by those seeking better mental functioning and emotional control.

After the program was completed, they took a second set of MRI scans. The images showed increased gray matter concentration in 4 regions of the brain, including the hippocampus, cortex and cerebellum, responsible for learning and memory processes and emotional regulation!

Brita Holzel, the lead author of the student notes:

“It is fascinating to see the brain’s plasticity and that, by practicing meditation; we can play an active role in changing the brain and can increase our well-being and quality of life.”

According to Sara Lazar, Ph.D, author and scientist involved in the study:

“This study demonstrates that changes in the brain structure may underlie some of these reported improvements and that people are not just feeling better because they are spending time relaxing.”

According to the research of the American Heart Association (AMA) journal, African Americans with heart disease that practiced Transcendental Meditation (TM) were 48% less likely to experience a heart attack, stroke, or die than a group that just exercised and dieted.

The research team split 23 people were into two groups. First, they instructed a group to practiced the technique of TM. Secondly, they sent a group off to attend a physical education class.

The TM group sate with their eyes closed for 20 minutes twice daily practicing the technique, allowing the deep rest of their minds and bodies while remaining alert.

The exercise group was professionally advised to spend at least 20 minutes a day at home exercising, eating healthy, and general relaxation.

Additionally, researchers found that those in the TM group had reduced blood pressure and reduced smoking and other adverse habits.

Neuroscientists from the Massachusetts Institute of Technology (MIT) and Harvard University split a group of 12 subjects into two groups – a group of 6 that practiced Mindfulness-based stress reduction (MBSR) and 6 that did not meditate.

Once a day, the MBSR group listened to a 45-minute program that guided them through the lessons. These lessons consisted of mindfulness meditations, body awareness, and simple yoga.

The team conducted two brain scans of the subjects during the study. They performed these tests three weeks in and again at the end of 8 weeks.

First, the meditation group had greater changes in the amplitude (size) of the Alpha brainwaves than the group that did not meditate. Essentially, the meditators had a greater improvement in focus and bodily awareness. The meditation group also expressed that they experienced less stress and reactive behavior.

Second, individuals that experience chronic pain may benefit from meditative practice. So findings from this study indicate that chronic pain sufferers may be able to lower their pain signals. According to Catherine Kerr, a professor at Harvard Medical School and the lead author of the study:

“They learn to be aware of where their attention is focused and not get stuck on the painful area.”

Can meditation reduce distractions and ease your pain? Yes! 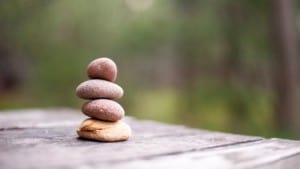 Final Thoughts on the Healing Power of Meditation

The fact that neuroscientists, doctors, and others within the scientific and medical community and now validating meditation through rigorous studies is a phenomenal development.

The fact that we can literally reshape our brain through meditation is incredible.

Meditation can reduce or eliminate our chances for heart disease, stroke, and other heart and brain-related ailments.

Meditation can result in better mental functioning and emotional stability.

And finally, meditation can help us find peace within ourselves.