Let us begin this (super informative!) article on information pollution by considering a quote by one Daniel J. Boorstin:

“Technology is so much fun, but we can drown in our technology. The fog of information can drive out knowledge.”

First, a bit of background on Mr. Boorstin. He was an American historian who served as the twelfth Librarian of the United States Congress from 1975 to 1987. Did you know that such a position existed? Pretty interesting, eh?

Since Boorstin stepped down from his position in 1987, the amount of information available for consumption has multiplied many times over.  This ubiquity of information has its roots in the development and widespread adoption of the internet. Of course, this resource is now available to nearly every person in almost any sector of the globe.

The Library of the U.S. Congress (or ‘L.O.C.’) is the most extensive library in both the United States and the world. To have earned this distinction indicates that the library must hold a vast amount of information. By most measures, it does – around 164 million items.

164 million is a vast number, indeed. But it hardly registers as a blip on the nearly omniscient ‘map’ of information and data.

Consider this: 266 million ‘e-books’ were sold in 2017 alone. That’s 102 million more books and media that are available in the massive structure that is the L.O.C. combined.

We are, as Mr. Boorstin warned, drowning in our technology. We are subconsciously allowing the opaque and murky fog of information to drive out actual knowledge, including that which adds vibrancy and joy to life.

“Once [brain] capacity is surpassed, additional information becomes noise and results in a decrease in information processing and decision quality.”

In the above quote, Harvard-trained psychologist Joseph Ruff is explaining the concept of information overload.

Overloading the human brain with information is not an easy task, and the fact that it can become oversaturated with data is not something to be taken lightly. It’s a sign that there is a severe imbalance somewhere. We’ll talk more about this later.

Information Pollution: This Is Your Brain On (Too Much) Data

In many ways, the human brain is just a massive storage house of information – and by ‘massive,’ we mean incomprehensibly enormous.

Scientists estimate that the human brain is capable of storing the equivalent of 2.5 petabytes of information. Let’s do a bit of conversion and simple math that will help us understand this number.

In 2008, the internet giant Yahoo built the world’s largest (and “busiest”) data warehouse. The warehouse is capable of storing and analyzing two petabytes of information. This storage space is used to analyze (and presumably, track *hint* *hint*) the behavior of over 500 million visitors to the World Wide Web every month.

In other words, no even an enormous multi-thousand-square-foot-man memory warehouse can exceed the storage capacity of the three-pound human brain.

But having all of this processing power comes at a cost, particularly if we don’t know how to manage it.

When we don’t know how to manage the brain, we pollute it with unnecessary, irrelevant, and potentially destructive information. This pollution even takes on a material essence in the form of cortisol, which is capable of killing brain cells. Unchecked, the brain’s continuous release of cortisol can cause it to shrink.

“Although there is considerably more information with which to deal, our brain’s ability to absorb and utilize this information is no better suited than the people of four of five hundred years ago.” P. Chard (source listed below)

It is critically important that each of us understand that information pollution has adverse effects on the brain that are very real. More important is the willingness to make the necessary effort to prevent and counteract these effects. Let’s discuss the former now.

Here are 10 signs of information pollution:

The brain can only handle a certain amount of information before the rest becomes “noise” – a static, real or perceived – that interrupts information processing capabilities.

In a study of bank loan officers attempting to predict bankruptcy, the predictions of individuals operating under conditions of information overload were both slower and less accurate.

An abundance of information takes its toll on the creative mind. When a firm in Canada introduced computers to the workforce, management required its workers to increase productivity by an astounding 1,900 percent. In the first hour alone, creative problem solving dropped by 30 percent. By the second hour, it had fallen by 80 percent.

Information pollution necessitates linear thinking, a mode of thought that is in no way conducive to creativity.

Concentration, or sustained attention, implies focusing on one thing for an extended period. It stands to reason, then, that a barrage of information is in no way conducive to this frame of mind.

“The brain works best when focusing on a single task. It takes time for cognitive processes associated with one task to be turned off. The more complex the task, the longer it takes to access and retrieve the [necessary] information from the brain’s vast storage.”

The average person consumes an average of 35 gigabytes of data per day. Any guess to how much information we store in the working memory? A maximum of 10 bits.

When we continually overload our brain circuitry – and more specifically, our working memory – it loses its ability to store information. Information pollution causes “a deficit in both short- and long-term working memory,” says Dr. Freundlich.

When the brain becomes overly stimulated, it becomes overwhelmed. One of the critical symptoms of overwhelm is anxiety, which arises out of a perceived lack of control. You may also experience shortness of breath and tension.

This state of overwhelm stems from information overload researchers sometimes call it “information anxiety,” “library anxiety,” and “information technology anxiety,” among others. The common thread that adjoins these terms is a fear-based response that arises from being exposed to excess information.

It stands to reason that continuous exposure to a barrage of information makes us agitated – and agitation is never good for promoting or maintaining harmony between two people.

Digital addiction is a more courteous way of saying the people can’t put their damn phone down. Or turn the television off. Or shut down their computer. They’re glued unconsciously to their digital screens. Studies show that digital addiction – a legitimate condition that is recognized by many in the academic and medical fields – “increases loneliness, anxiety, and depression.”

Therefore, the vast information dumps that are YouTube and Facebook keep semi-conscious people – children, teenagers, and adults alike – glued to their screens. How? By deliberately hijacking your attention.

Information pollution interferes with both our mental and physical equilibrium. Thoughts have tremendous momentum that can carry us down undesirable paths. Of course, that’s including adverse emotional states, if we’re not mindful.

Many individuals and organizations use data to make better, more informed decisions. The paradox is that humans, being poor judges of “enough information,” semiconsciously consider too much information. And that can produce paralysis by analysis.

The result is poor decision making. According to Huff, After a certain point is reached, the decision-maker has obtained more information than he can process, information overload has occurred and decision-making ability decreases.”

Most people who can’t rest the urge to check their devices, email, and other communications, often suffer from FOMO, or the fear of missing out.

FOMO is defined as “a pervasive apprehension that others might be having rewarding experiences from which one is absent.” In one survey taken: 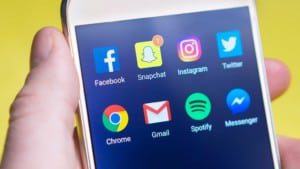 Final Thoughts: Is ‘Digital Minimalism’ the Answer to Information Pollution?

“Solitude deprivation: A state in which you spend close to zero time alone with your own thoughts and free from input from other minds.”  ~ Cal Newport, author of “Digital Minimalism: Choosing a Focused Life in a Noisy World.”

Indeed, some of those in high places probably couldn’t care less about the detrimental effects they’re having on innate human neural networks. So it’s up to each of us to take charge of our own digital lives.

Similar to the mind, technology and information is a good servant but a terrible master.

Additionally, technology and information are similar to the mind in that no one should have the right to tell you how to use it.

BUT, it’s a scientific fact that the human brain is not wired to be constantly wired.

First, there’s the issue of humans being biologically incapable of multitasking.

Then, there’s the problem of the automatic stress response that kicks into gear every time our senses are flooded with data.

And, there’s the fact that our working memory can only hold a tiny fraction of the information pollution that we expose ourselves to.

Of course, there’s also the fact that the attention can be subconsciously hijacked – something that the social media conglomerates are constantly doing.

So is digital minimalism the answer? Or a digital detox? That depends.

How much do you really value your voluntary attention?