You have probably heard of an “empath” before, and these intuitive, caring people go by another name as well: the highly sensitive person or HSP. Dr. Elaine Aron, a psychologist who started studying this trait of people in 1991, discovered that around 15-20% of the population has this highly sensitive personality trait.

What makes highly sensitive people different? Dr. Aron says that variations in the brain of an empath cause them to respond differently to external stimuli. They might become overwhelmed quickly by bright lights, loud noises, and a hectic environment. They need more time to unwind after social interactions and enjoy quiet, peaceful surroundings. Highly sensitive people also have a great love and understanding of nature and animals.

We feel everything deeply and crave intelligent, soulful conversations with people. As this is hard to find in today’s world, it leaves many highly sensitive people feeling empty and on a constant quest to make the connections they desire.

What the Science Says About Highly Sensitive People

You might be thinking, “This sounds like a bunch of New Age nonsense,” but hear us out. Scientific studies have started to emerge, confirming actual differences in the highly sensitive brain. Highly sensitive people have what’s called sensory processing sensitivity, which causes them to become easily overwhelmed by too many stimuli.

Highly sensitive people are greatly affected by others’ moods, which is confirmed by this study. Researchers did fMRI scans of the brains of those with SPS. Eighteen participants, ten females and eight males, viewed photos of their romantic partners and strangers showing positive, negative, and neutral expressions. 13 of the 18 participants were scanned twice within a year.

The study found that HSPs had “increased brain activation of regions involved in attention and action planning (in the cingulate and premotor area [PMA]).” Furthermore, it found that happy and sad photos were associated with activation in brain regions involving awareness, empathy, integration of sensory information, as well as action planning. This trait is thought to be one of two strategies that evolved for survival purposes. This outcome makes sense because being sensitive to environmental stimuli would allow us to take quick action and be on constant alert for threats.

Another study found that people with this trait had an increased awareness of opportunities such as food, mates, and alliances within their environment. In our modern environment, it makes sense that it only evolved in 20% of the population, because it wouldn’t allow individual payoffs if it were found in the majority.

With that said, perhaps this is why many highly sensitive people have such a hard time adjusting to modern life. Scanning for threats and opportunities in our modern world takes a lot of cognitive energy, which explains why people with this trait need so much time to recharge. Also, the threats and opportunities are not as easily discernible, which leaves the HSP feeling drained. We are here to help the species survive, but in our modern life, what skills can we bring to the table? If you are an HSP who feels a little lost and misunderstood, you’ve come to the right place. Here are a few signs you might relate to if you’re a highly sensitive person.

In crowds of people, you usually feel frazzled and tired. Sure, you can enjoy a concert or a night out on the town, but you might need a day or two to recharge afterward. Even worse are events where you have to engage with many different people. It’s not that you dislike people, it’s just that socializing drains your energy much of the time. Even if you identify as an extroverted HSP, you may find that you need a lot of downtime after a social event.

Plus, you’re picking up on the thoughts and emotions of everyone around you, and this only adds to the feeling of overwhelm. To combat these feelings, make sure you practice setting boundaries and don’t try to be something you’re not. People appreciate a good listener who can provide thoughtful conversation.

Many people who identify as HSP have a hard time in typical jobs because of this. Retail and foodservice jobs are the HSP’s worst nightmare due to the near-constant influx of stimuli. In fact, many HSPs are drawn to freelance work from home or becoming their own boss for this very reason. They require a more quiet life, which can be explained by the studies above.

If we’re always on alert for threats and opportunities, our brains are running on overdrive. In the modern world, this translates to an almost constant state of overstimulation. Therefore, the HSP retreats to their refuge more often than not.

Perhaps you’ve grown up in an environment where people didn’t understand your sensitivity. They might have seen it as a sign of weakness or even a flaw in your character. Luckily, scientists can now back us up and provide sound research for why we’re made this way. The next time a family member or friend pulls this card on you, you can tell them that you’re in the minority. You would’ve helped them survive in our earlier days, and this should make you feel pretty special indeed.

4 – You prefer spending time alone rather than with others.

Your favorite place is your home, where you can unwind after a long day of work or school. All the stimulation in the world melts away, and you can relax with a good book and a hot cup of tea. You’re free to exist without having to cater to the demands of the outside world. If you’re genuinely a highly sensitive person, you will relate to how amazing it feels to have some peace and quiet. Unless you live out in the country, this is very hard to come by.

5 – Other people often come to you with their problems.

Have you ever noticed that other people are drawn to you? Highly sensitive people often have this aura of compassion and safety about them. In other words, people feel they can come to you with their problems, and they won’t be judged or turned away. In this cruel world, many people are lonely and left on their own to deal with their demons.

However, to them, you’re a beacon of hope, a light shining in the darkness. If you find that random strangers approach you and pour out their life story, you’re likely a highly sensitive person.

6 – You get easily upset by violence or injustice.

You can’t stand scary or violent movies, TV shows, books, or music that depicts violence or hatred. You much prefer happy, uplifting entertainment that shows the beauty of being human. Movies and shows that represent love and peace are much more in line with your true nature. You also can’t stand seeing animal and human abuse. If only you knew how to fix the troubles of this world, your heart would finally feel happy. You often think about the environmental destruction and greed on this planet and wish you could eliminate it somehow.

7 – You feel starved for deep connections.

This trait is common among many highly sensitive people. They find that others don’t “get” them, and they’re always on the search for deep, meaningful connections. Highly sensitive people can’t stand shallow conversations about gossip, money, possessions, or other things that most people talk about. They crave conversations where they can talk about the meaning of life, outer space, dreams, fears, doubts, childhood dreams, etc.

HSPs usually feel pretty lonely among most people, so this is another reason why they retreat into their hermit cave so often. It’s not that they don’t like people; they require a specific type of connection that feels like searching for a needle in a haystack. 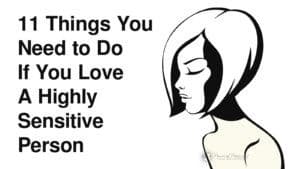 Highly sensitive people make up around 20% of the population. Characterized by sensitivity to external stimuli, a knack for reading people and the environment, and feeling emotions genuinely, HSPs are something special. If you come across someone with these traits, cherish them, because they will never leave your side. Sensitive people are some of the most loyal, beautiful people you will ever meet.

“Slowly, a gentle, quiet, personal victory of the spirit grows out of her fear and doubt.” – Elaine N. Aron