Sisters may annoy one another more than they’d like to admit, but at the end of the day, they have each others’ backs more than anyone else. Blood runs thicker than water, as they say, and sisters have one of the closest bonds among anyone. Even if they fight over the smallest things, they won’t hesitate to provide a shoulder to cry on or go on an ice cream run to help each other through a break up the very next second.

Even if they haven’t talked in a while, sisters can call each other up and pick up where they left off without worrying about awkward silences or holding grudges. Life gets busy, and we don’t always have time for our family. However, sisters understand this and won’t ever turn away when they need each other the most.

In other words, sisters aren’t going anywhere. No matter what happens or who else in their lives might desert them, they’re there to stay through thick and thin. Not to mention, another benefit to having a sister is that they make you a better person, according to research. Skills like communication, compromise, and negotiation are learned through resolving conflicts and trying to understand each other.

“A sister is someone who loves you from the heart. No matter how much you argue you cannot be drawn apart. She is a joy that cannot be taken away. Once she enters your life, she is there to stay.” – Shiva Sharma 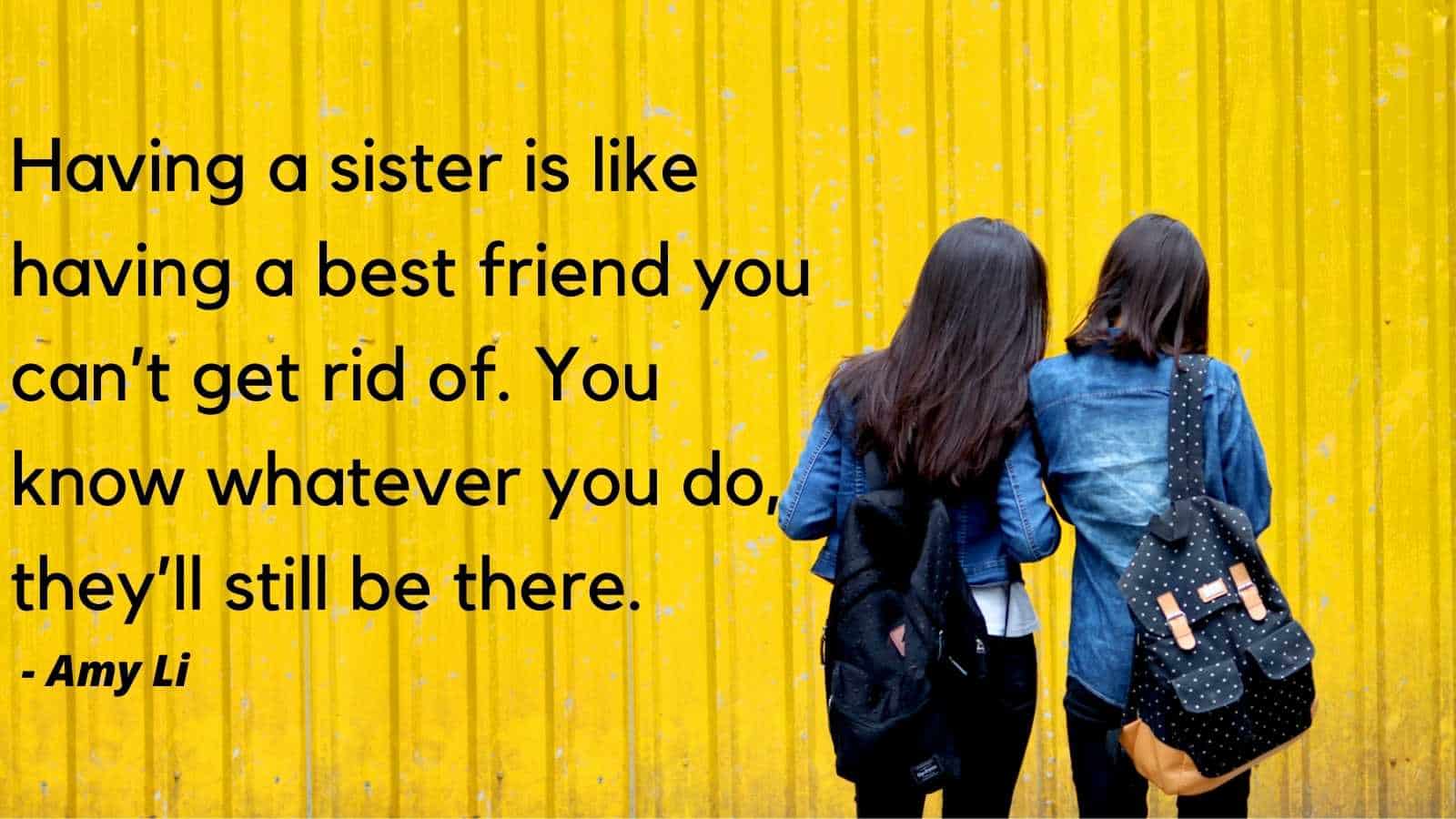 Plus, another study published in 2010 in the Journal of Family Psychology found that having a sister can boost your mental health and self-esteem. Sisters provide moral support when the other one is going through a hard time. Researchers from Brigham Young University found sisters help one another from “feeling lonely, unloved, guilty, self-conscious and fearful.”

This makes sense because only children have no one to confide in or lean on for support, so having a sister is like having a guaranteed support system.

It teaches you to be ambitious and have greater independence

A 2009 survey performed by British psychologists discovered that people who grew up with at least one sister had more independence and determination than those who only had brothers. Study co-author Tony Cassidy of the University of Ulster said in an interview with the Daily Mail, “It is about that intrinsic desire to want to do better every time, to strive towards goals. It certainly seems there is something about the family situation with the number of girls in it that leads to more encouragement to achieve and be independent.”

Now that you know about some of the benefits of having a sister, we will go over some traits that sisters exhibit.

11 Benefits of Having a Sister

Here are 11 common traits sisters have that most people don’t know about:

1 – An inner knowing when something is wrong

Sisters don’t have to say when there’s something amiss. They can read each other like the back of their hand and nothing gets past them. Even if they don’t live together, their senses go off when the other one is going through a hard time. Some might call that a sixth sense or intuition, and it’s even stronger between siblings.

Having a sister is like having a free therapist; you can speak freely without fear of judgment or criticism. Being able to open up and share your innermost fears, desires, and stories with someone is important, and sisters are always there to listen.

Whether that means talking in funny accents, coming up with your own code words, or having a secret handshake, sisters speak in ways others would never understand. They’ve been through it all together, and after years of spending time together, they’ve developed their own special way of communicating.

4 – Looking up to one another

Sisters don’t sugarcoat anything. They are honest with each other about everything, even if it seems harsh or inconsiderate. They want the best for each other and will not hesitate to lay it all on the table.

If you observe sisters, you will probably notice that some speech patterns are similar, such as:

Because they’ve been around each other so long, many sisters find themselves speaking in similar manners. They aren’t trying to copy each other, but they’ve just picked up on one another’s speech patterns. Next time you’re around sisters, see if you notice this about them!

7 – Annoying each other for no reason

Plenty of sisters like to get under each other’s skin just because, and this is just part of what it means to be siblings. It could be due to sibling rivalry or maybe repressed anger if the younger one got more attention at some point. If you have a sister, you know exactly what we mean – from the name calling to hair pulling to clothes stealing, sisters will do whatever it takes to push each other’s buttons.

8 – Only the big sister can pick on the little sister

It’s fine for the older one to call the younger one names or tease them, but if anyone else tries to do the same, the big sister will always stick up for her little sis. This goes the other way, too; no matter how small she is, little sister will stand up to anyone who tries to bully her big sister.

9 – Being able to talk about personal things

Since the older sister goes through a lot of life experiences first, she can be there when the younger sister inevitably has questions. Whether it’s about puberty, boys, weird things happening with her body, or anything in between, sisters can always count on each other to answer the sometimes uncomfortable or embarrassing questions.

10 – Knowing each other to the core

No one knows you as your sister does. She’s seen you at your worst and doesn’t judge you for it. During your darkest moments and toughest battles, she’s been at your side supporting you through it. Living with someone really shows you who they are, and unless you’ve been married for many years, no one has lived with you as long as your family.