It’s not uncommon to overthink everything about a potential relationship. The signs that a man is falling in love are often right there in front of you, but at times you might think he’s playing games or leading you on.

The feeling of falling in love is different for everyone, and some have experienced it while others have not. Scientists have proven that being in-love by scientifically examining the brain is different from lust or infatuation. And how men fall in love may be different from the way that women fall in love. As such, often dating advice that is not specific to gender can be misleading or incorrect. So, what are the signs of being in love? How do you know if he loves you?

SO, HERE ARE 10 TIPS YOU CAN LOOK OUT FOR TO FIGURE OUT HOW TO KNOW IF HE LOVES YOU.

One of the first signs a man is falling in love is a classic: body language. To gauge whether the guy you are with is falling for you, consult his body language. A man interested in you will lean towards you while you are talking, mirrors your actions, or stretches out his torso.

In a study by Vacharkulksemsuk and associates, it was proved that speed daters who were expansive with their body language like spreading out their limbs had 76% chance to be selected for a date.

On the other hand, if a guy folds his hands on his chest, his body is turned away from you, it is likely a clear sign that he is not falling for you in any way. Most likely he regards you as a friend.

HE STARES AT YOU A LOT

If your man stares at you frequently, it can be a sign that he is head over heels for you. When you maintain eye contact, it means you are concentrating on something. Therefore, if he is staring at you lovingly, he just might be falling in love.

Studies have shown that couples who lock eyes have a feeling of a stronger romantic connection than those who fleetingly stare at each other. A man who stares at you, sweeping his eyes across your face often shows that he is falling for you.

At Wellesley College and Kansas University, researchers discovered that both women and men who are romantically interested in someone would stare at the chest and head. If he stares at your feet and legs, you are in the friend-zone, my dear.

HE TOUCHES YOU OFTEN

Common dating advice often includes the importance of initiating physical touch as a clear sign that you are interested. Therefore, if you are dating someone and he takes every opportunity to put his hands on you without it feeling creepy, he is likely falling for you. Even small touches on the shoulder or arm are a great sign to look out for.

For instance, if you have a tattoo and he gently grabs your hand to look at it or opens the door for you to get through first, and lightly grazes his palm on your lower back, girl, he is into you.

Men who are dating someone will not often do things to intentionally mislead you. As such, they probably won’t go out of their way to touch you if they do not like you; they will want to do anything to avoid giving the wrong impression. At times, a man may make it seem accidental, ah ah! he wants to touch you. Perhaps he might coerce you into an arm wrestle that he planned way ahead.

HE TRIES NEW THINGS WITH YOU

At the beginning of a relationship, you want to impress your partner, but when he continually tries new things that you enjoy, that can be a good sign that he’s got a case of the love bug.

A study proves that people who were not previously in-love have different traits and interests after the start of a long term relationship. If he hates dancing but is still willing to go to those classes with you, it is going to have a positive effect on his personality, and be an indication that he has very strong feelings towards you.

This might seem like a funny one, but only couples who are truly in love are ok with all of the gross stuff that we only do in private on a regular basis. When you do anything that you would not do on say, a first date, and he’s ok with that? It’s a sign. A perfect example would be if he is a germaphobe and you know it, but he still wants to make out with you after you picked your nose. If this happens, he has got the love bug.

The University of Groningen in the Netherlands conducted a study and discovered that the feelings of sexual arousal could often override any feeling you might have of being grossed out.

HE LOVES YOUR WEIRDNESS

Initially, in the get-to-know-you stage, you hide your quirkiness, but once he knows you better, he will likely notice them but still stay with you. If he appreciates your quirks, it just might be the things that attract you to him.

A study found that small quirks make someone fall deeper in love than the physical attributes, due to unique preferences. If he passed judgment on you the first time a little too harshly at first, and suddenly he likes your quirks, he got bit by the love bug.

WANTS YOU TO BE HAPPY

In a partnership, love is equal, but when you are in love, your partner’s happiness is essential.

According to research, the “compassionate love” is a massive sign of a healthy relationship. When he goes to great lengths to make sure that you are happy and wants to make your life easier, he is in love.

A man in love will ensure that you are dry in the rain, makes you breakfast when you have a busy morning, anything really to ensure you have an easy day and you are happy.

When you are together, do you notice that he often has a smile on his face or he is always happy? If so, he is falling for you. A smile attracts someone to you, and it is an indicator that he is drawn to you.

But also check the kind of smile he is giving you. Is it a polite smile or a fake smile? A genuine smile will include his eyes which show that he is enjoying his time.

“That dress looks fantastic on you!” ,“I enjoyed my time with you today.”

Any compliment that comes your way shows he is in-love. A man won’t compliment you unless he genuinely likes you. Pay attention to the way he says it. 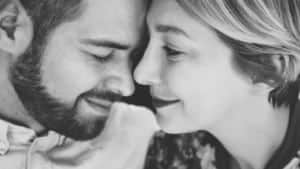 Author, social worker, and activist Feminista Jones did a social experiment and discovered that men don’t like when you agree with the compliments they give you. Most often than not, they expect you to be shy about it and demure.

Say thank you and move on. Don’t go “I know, right?” It is not appealing to them.

REITERATES WHAT YOU TELL HIM

When you tell him a story or inform him of something, and later on says it back to you, he is falling for you.

It might be something silly, about whales, or the time you spilled coffee on your parents when you were talking some time back. When you meet up, and he brings up the story when a waiter accidentally drops a drink on you or another customer, he is falling for you.

This shows he is paying attention to you, and that is excellent news!