While the world is still adapting to Greta Thunberg and wrapping their heads around the differences and links between global warming and climate change, scientists have also been studying the impact of the world population on our supply of food and water. Food shortages will follow, almost certainly.

That’s because experts predict that by 2050, our population will have grown from the current 7.7 billion people to roughly 9.7 million people. Furthermore, they expect a plateau by 2100 at about 11 million people, according to the latest U.N. report.

Scientists reveal that billions could face food and water shortages in 30 years. In fact, they are working on ways to prevent it.

According to Environmental Reports, scientists have calculated that we have enough food currently to feed an estimated 7 billion people adequately.  Of those 7 billion, 1 billion are starving or malnourished due to intense poverty and a wide range of distribution.  Statistics predict that to make up for those 1 billion, plus account for population growth of 2 billion, our food production needs to increase by 60-100%. Or, think of it as almost double what we produce now.

The population growth, as projected by the U.N report, shows that 9 countries will account for over 50% of the increase.  Those countries making the list are the following:

Birth Rates as related to population

This population growth continues despite fertility rates decreasing from 3.2 children per woman to an expected 2.2 by 2050.  Although some countries do have a number almost double that,  most see decreases. These drops stem from mortality rates, birth control, or choice.  However, the poorer countries will likely demonstrate the greatest increase. This fact increases the concern due to the difficulty in food production, current poverty levels, poor health and education systems, increased malnutrition, and hunger.

Changes in working population vs. elder population and the life expectancy

Where childbirth is decreasing in the majority of areas, there is an increase in the working ages of 25-65 in much of sub-Saharan Africa, areas of Asia, Latin America, and the Caribbean.  This has the potential of creating increased economic growth for those countries.

Life expectancy for the more advanced countries is expected to increase to an average of 77.1 from the 2019 average of 72.6 years.  The poorer countries average to be about 7 years less.

In specific areas of the world, the older generation of 65 years and older, is becoming a larger group.

The variables affecting supply and demand for food and water

In looking at the numbers, it seems ridiculous that to feed 3 billion more people, we need to almost double the food production.   What are the variables affecting this demand?  Environmental reports give us a breakdown:

There are multiple complications that crop up in giving an answer.  Currently, only about 4 crops make up about 2/3 of our crops; maize, rice, wheat, and soybean.  At present, the countries with the land and resources to grow them are already using what land is available.  Other countries aren’t naturally predisposed to growing these crops and require additional water, disease control, fertilization, or stable socioeconomic environments.

An additional factor prompting food shortages is that in many countries responsible for the yields occurring now, many of the crops are stagnating. Or, they only increase at a very slow rate.

A dangerous side effect of attempting to increase crop production is the extreme amount of nitrogen required to do so.  We would need an increase of 150 megatons of nitrogen.  That is 6 times the amount China uses and about 12 times the amount used in the United States.  Controlling runoff from fields into waterways would be extremely difficult, if not impossible.

Additionally, nitrogen adds to our CO2.  That much nitrogen would increase CO2 by 2 gigatons each year.  That amount is more than the emissions from every car, plane, and train in the United States.  The consequences would be deadly for us, for the animals, and the planet’s ecosystem.

Water shortage and its causes

Most of us know that the planet is composed of 70% water.  What you may not be aware of is that only 3% of that water is available for use for irrigation, hygiene, cooking, and drinking.  Of that 3%, 2/3 is unable to be accessed due to being frozen in glaciers or just not able to be used.

According to the World Wildlife Organization, 1 billion people fail to have access to water, and 2.7 billion have a severe lack of water for a minimum of 30 days of the year. 2.4 billion people can’t even access water for proper hygiene and therefore die from cholera and typhoid fever.  Children in upwards of 2 million die from diarrhea-related illnesses yearly.

It is expected that 2/3 of the population will face a water shortage by 2025.

Contributing to the water shortage

Multiple factors are contributing to an increasing decline in water availability:

How can humankind manage the food and water shortage?

With all of the scary predictions, what is the good news?  There are things we can do!  We have already started to take a few actions.

Wetlands have been on a protected land list for 40 years. These wetlands have required a commitment from the respective countries to protect them from pollution, development, and drainage.

Many companies have agreed to make changes in how they use their water supply.  Outside organizations come in, analyze their usage, and recommend changes for improvement.  This results in a “water footprint,” which is a score level of how responsible a company or industry is with their water usage.  Some experts even suggest that grocers should post the water footprint score should on produce so consumers can choose to buy better-performing products.

3 – Improve agricultural use of land

Making better use of the agricultural land we have and not expanding to destroy wetlands or forests which are necessary for our environment. Focus our attention on more precise and efficient farming methods on lands in which the yield is lower due to the natural environment.

Harness the technology of robots for high tech, precise farming. Rather than broad spraying of chemicals, water, and use of heavy equipment, which causes soil damage, robots now precisely spray crops with the insecticide, fertilizer, and water needed per type of crop.

Farmers are electing to use drip systems rather than the inefficient irrigation systems.

People consume only about 55% of the grains our farms produce.  In fact, about 36% goes to feed livestock.  Thus, the choice to eat less meat in general, and more meat of grass-fed animals could greatly decrease our need for grain production.

Unfortunately, we throw away a tremendous amount of food.  In fact, we could use that as mulch for our own gardens or donated it to farms. We could also alter our buying habits and shop more frequently and purchase less at a time, so food does not spoil prior to eating.   We could also eat smaller amounts.

Extend the life of certain foods. Some food, especially fruit, tends to spoil quickly.  Scientists are working on ways to extend their life so that perhaps they can be picked, delivered, and eaten before they spoil. 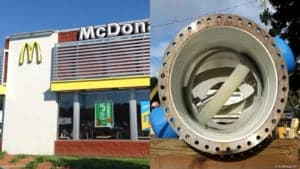 Scientists warn us that billions could face a water and food shortage.  While our population is going to grow, we still have choices both as consumers and as companies to make responsible, environmentally friendly and restrained choices to ensure that food and water remain viable for the mass population.  Our choices may be tougher, but we still have a chance.