Most people are aware that we live in a world full of polluted air. We know it can harm our breathing ability and our physical health – but did you know that your mental ability is also at stake?

Recent studies have indicated that your cognitive ability may be significantly harmed by regular pollution exposure. In today’s world, that is something worrisome, as almost everyone is exposed to pollution on a daily basis.

How Air Pollution Can Harm Intelligence

We often hear about how terrible air pollution has become, but rarely do we hear the exact statistics that quantify this epidemic. The emission of greenhouse gases from factories, vehicles, energy production plants, and more has all led to increasingly worsening signs of air pollution.

This declining air quality has slowly led to issues such as global warming, climate change, fungus growth, and adverse effects on human, animal, and plant health. In fact, it’s become so severe that it’s no longer possible to consider the issue with positive thinking; governments all around the world are working overtime to help reduce emissions. (1)

The issue is that air pollution isn’t just something that affects you if you go outside. Just living and existing means that you, your family, your pets, and even unborn children are all suffering the negative sides of pollution.

The main types of pollutants in the air are as follows:

Recently, studies have indicated that air pollution can actually cause your intelligence levels to decline. How is this possible? Let’s find out.

In many developing countries, unsafe air toxicity is a serious problem, and it’s already known that it has significant negative results on health and life. To study one area of its effects, researchers Xi Chen, Xin Zhang, and Xiaobo Zhang set to work studying the link between exposure to air pollution and cognitive ability in China.

The study, entitled “The impact of exposure to air pollution on cognitive performance”, sought to illustrate this effect using a mix of air quality data and a longitudinal survey that was nationally representative of those living in the country. A positive link was discovered between these factors. (2)

The study’s findings were rather bleakly conclusive. Results indicated that air pollution can cause a decline in performance in verbal skills and mathematical ability. The study found that regular exposure to air pollution caused test participants to do more poorly on verbal tests as they grew older and were exposed to more pollution.

This was especially apparent in elderly men and also in those with lower education levels, likely due to the condition of their working environments. Researchers suggest that the damage caused by pollution is likely responsible for a large amount of economic damage and health expenditure.

According to the study authors, it is possible that reducing particulate matter concentration in the country, which now sits at smaller than 10 ?m, to the 50 ?g/m3 Environmental Protection Agency standard annually could significantly help individuals to gain better cognitive ability.

The elderly population is especially at risk due to the way the pollution was revealed to lower their thinking skills, potentially leading to increased health and economic expenses as well as poorer decision-making skills.

The negative effects of air pollution on intelligence are already terrible for your cognitive ability, but that’s not the only way that it can take its toll. It can have other negative effects on your entire body. Here are some of those problems:

When you repeatedly breathe air that is polluted, your chances of developing respiratory issues increase. Your lung function actually slowly begins to decrease due to inflammation just after 6 hours of exposure. You may sneeze, cough, wheeze, and become ill more easily.

Air pollution can also further exacerbate existing conditions like asthma. If you don’t have respiratory diseases, you’re at risk of developing them.

Most types of pollutants that fill the air are carcinogenic in some way or other. This means long-term exposure can greatly increase your risk of developing cancer later on in life, even without a family history. This is especially true for lung cancer.

Kids who grow up in environments with air pollution suffer terribly as a result. Their lungs often do not grow and develop the way they should. This often causes respiratory diseases, no matter how many positive preventative measures are taken. (3)

But pollution can affect a child even before they are born. They can have worsened brain growth, develop autism spectrum disorder or asthma, and even be more susceptible to premature births and miscarriages.

Research indicates that pollutants can enter the body and cause damage to the arteries, hardening them and potentially leading to strokes and heart attacks. If you already have a heart condition, you’re even more at risk of dangerous consequences to pollution.

Degenerative diseases like Parkinson’s and Alzheimer’s are said to be more likely to develop in those who have been exposed to polluted air – and the study we’ve talked about corroborates that fact. Schizophrenia may also develop more easily in those who are regularly breathing polluted air.

Type 2 diabetes is the kind that develops in adults and is not genetically developed at a young age. This condition can often be more likely to occur in those who have to deal with polluted air on a regular basis.

But why does all of this happen? It has to do with inflammation. Pollutants trigger inflammatory responses in the body, and chronic inflammation within the body can lead to all these disorders and issues.

Due to the prevalence of air pollution, it’s virtually impossible to totally eliminate the effect of air pollution on your body perfectly and entirely. But there are some steps you can take to potentially protect yourself from the worst of it, avoiding the worst of the repercussions. Here are a few methods:

The easiest air pollution protection method is to simply wear a mask. They’re not 100% foolproof, but they help to some degree. Industrial masks are far more effective at blocking smaller air particles than standard face masks as well, so take that into consideration when purchasing.

Most weather reports on TV, in radio programs, in newspapers, and online will provide daily forecasts of the severity of air pollution in certain locations. Try to stay inside on particularly bad days.

Yes, working out is important to health, but make sure you’re doing it in the right places. Don’t go for a run where there are a lot of cars or vehicles driving past. Opt for parks or similar locations, and go to an indoor gym on particularly polluted days.

Most standard cleaning products that you can buy in stores contain a lot of chemicals that become hazardous indoor pollutants. In fact, regular use of these products can lead to lung cancer! Go for organic or natural iterations of these products.

A lot of equipment that you use to take care of your lawn may run on gasoline, which is a big source of pollution. Try using electric or hand-powered options instead.

Did you know that the process of generating electricity can actually lead to air pollution? Work on only using electricity when you absolutely need it to lower your carbon footprint – and to save money at the same time.

Invest in an air purifier for your home, and even a small one for your car. If you spend a good amount of time in your car, you need to make sure that the air within is just as clean as you’d want your home’s to be. You should also open windows for a short while in the morning to boost air circulation. 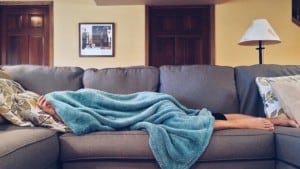 A healthy diet can actually help your body to protect itself against certain adverse reactions to air pollution. Vegetables and fruits are a must, as well as beans and nuts. You should also consume a good amount of healthy fat.

Today, smartphone apps are now available that can give you air and pollution information updated in real-time, customized to your location. Many of these apps are totally free to use, too!

Final Thoughts On How Air Pollution Can Hurt Your Intelligence

It’s difficult to avoid air pollution. The best you can do is to work hard to protect yourself against the worst of it. By educating yourself and doing what you can to reduce pollution at home and in your environment, you’ll already be safer.

Unfortunately, air pollution happens more and more every year. It’s not something that even a person with positive thinking can avoid, and its bad effects on the health can’t just be ignored. As such, it’s important for you and those around you to do your part in reducing emissions and fighting against the onslaught of pollution.