Female friendships are some of the strongest bonds on the planet. We can count on our girlfriends to bring us ice cream when we’re going through a breakup and laugh at our lame jokes. We look to them for comfort, support, understanding, and a shoulder to cry on.

Of course, we love our significant other, but men and women think and act very differently, and women tend to bond on a deeper emotional level. Women help talk each other through problems and support one another to become the best versions of themselves. It’s hard to describe in words just how important female friendships are in a person’s life.

Studies have even shown that women with early stages of breast cancer were four times as likely to die from cancer if they didn’t have close friends. Those who had more friends had a higher rate of survival. This remained true whether the friends lived close to each other or far away.

Below, we will share with you some photos that prove how powerful friendships really are.

11 Photos That Show the Power of Female Friendship

1. Real friends will do anything to capture your perfect Instagram photo.

This is what true friends are pic.twitter.com/ot49xtESuF

2. Because matching friendship bracelets aren’t just for friends in middle school. Adults can wear them too and they mean just as much!

when you and your best friend are extra af and get matching bracelets and rings with each other's birthstones pic.twitter.com/PyXP9SgWpE

only true friends shave your legs… even if it's only bc she was grossed out by the stubbly-ness..😂😂 pic.twitter.com/C6AhMPDNlS

4. When you miss your best friend so much you make them your wallpaper on your phone just so you can see their face.

When you and your best friend makes each other as a wallpaper because you're hella sad HAHAHHAHAHA @sophiaxnichole pic.twitter.com/LXWThlEje3

5. This is what real female friendship should look like.

My mom and her friends have been best friends for 40 years now. They call themselves “The Sensational Six”. They planned this trip to Florida for the 6 of them. Unfortunately, one of them passed due to cancer in April.

This is the type of friendship I want to have. 💞 pic.twitter.com/WHEtGjyt2o

Two friends who got fit together from pics

7. The lengths a real friend will go to for your perfect photo are unreal. 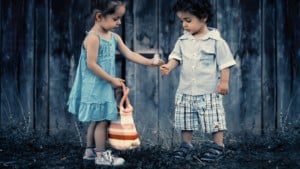 8. You don’t always have to be together to get your nails done at the same time!

When you and your best friend get mani pedis together…apart. pic.twitter.com/VVCPUE8jIs

9. Their roles have switched but the friendship remains the same.

I zipped her up 4 years ago, and 4 years later she has my back👭✨ pic.twitter.com/eGpRShHpB6