Because of this, you’ll find countless types of medicines, home remedies, as well as other types of treatment designed to help relieve the symptoms associated with breathing problems. Long pepper has been known for centuries as one of those popular, effective treatments for asthma as well as other breathing-related problems.

What is Long Pepper?

Long pepper, a plant native to Indonesia, grows on a flowering vine. More specifically, the vine contains various flowers which form into fruit that contain seeds in them. Once fully ripe, they are dried and commonly used as a spice for seasoning (1).

In addition to this, long peppers are commonly used for medicinal purposes. Furthermore, long-pepper contains a chemical known as Piperine. This chemical fights off particular parasites known to cause infections for humans. Not only this, but the chemical Piperine is also capable of changing the lining of your intestines, which is beneficial because it then allows your body to absorb certain medicines and other drugs more effectively.

This pepper is primarily made up of various amounts of volatile oils, Piperine, resin as well as multiple other components. These properties all work together to provide individuals with a multitude of long pepper benefits, such as its ability to improve your appetite, digestion, and relieve stomachaches. In addition to this, some long pepper benefits include its capability to improve heartburn and cholera (2).

Given its many benefits, long pepper offers individuals various uses, both for either minor medicinal issues as well as major health issues (3).

This pepper offers its users a multitude of benefits. Additionally, nutritionists praise it for its ability to improve affected individuals’ asthma and breathing problems.

Long Peppers for a Cough

Coughing can be caused by a wide range of factors, including anywhere from a virus, allergies, an irritation in your throat, acid reflux, or some other type of issue that negatively affects your throat. Long pepper has the ability to treat your cough and soothe your sore throat because of its many positive properties that it contains, such as antifungal properties, analgesic properties, and antimicrobial properties.

Long peppers can also relieve coughing because it is a herbal remedy, which already reduces the risk of your developing any negative reactions to medicine. Since it is used as a natural medicine, the number of negative effects that long peppers have on individuals is very small.

Asthma, a breathing condition, results in spasms occurring in your lungs. These spasms in your lungs cause breathing problems and are usually the result of either hypersensitivity or an allergic reaction that has acted upon your body.

More specifically, long peppers contain antioxidant properties that fight against free radicals in your body. These free radicals have the potential to worsen asthmatic conditions and even cause damage to your body. Furthermore, long peppers also have the ability to reduce the negative conditions associated with asthma; its antibacterial properties are capable of reducing the intensity as well as the frequency of asthma attacks.

Aside from the benefits that long peppers posit for asthma conditions and coughing problems, they pose multiple positive impacts on other conditions as well.

Sometimes our livers’ health is negatively impacted from all of the greasy junk food that we consume. Long peppers have the ability to pose healing effects on our livers because they are responsible for eliminating bad toxins that have built up in our organs over time. By removing these bad toxins, our organs function more effectively.

Long peppers have the ability to promote weight loss because they are capable of burning fatty acids in our bodies. Because long peppers are natural and organic, they also offer a healthy weight loss option. Moreover, long peppers mobilize stagnant fat and eliminate the bad toxins released into our bodies by unwanted fat pockets.

Diabetes is classified as a group of diseases characterized by your body producing too much sugar in its blood. This condition affects more than 29 million people in the United States. Long peppers have the ability to regulate the rate that your body releases glucose in your blood, resulting in the symptoms related to diabetes decreasing.

Not only this, but long peppers also have the ability to increase the production of insulin, which is responsible for decreasing your blood sugar level and preventing it from getting too high. In doing so, long peppers can diminish the effects commonly associated with diabetes.

Long peppers boost your digestive system’s health because it stimulates your system, which boosts your appetite, since it contains carminative properties. In addition to this, long peppers contain anti-inflammatory properties capable of fighting and protecting your body from ulcers, eliminating diarrhea, and helping you overcome gastrointestinal infections.

Long peppers can also fight off and prevent inflammations occurring in your body. More specifically, they can eliminate the negative effects associated with rheumatoid arthritis. Arthritis, an inflammatory disease, causes severe pain in the joints and impairs mobility.

Long peppers have the ability to remove the bad toxins from your body that contribute to this disease. Additionally, long peppers promote your metabolic health as well as your digestive health, resulting in decreased stiffness of the joints of individuals that have arthritis.

Long peppers also rejuvenate the reproductive organs of both men and women in addition to helping with reproductive problems, such as infertility and premature ejaculation. Not only this, but long peppers promote female’s health and recovery while in postnatal care.

Side Effects of Long Peppers

Since long peppers derive from a flowering vine, they provide you with natural and organic benefits. Because of this, they may seem completely safe to consume in all cases. But consuming too large of doses of long peppers can actually prove harmful to your health. You should never take more than the recommended dose of the peppers. Additionally, pregnant women are also advised to avoid consuming long peppers due to a lack of research done on the side effects that consumption can have on infants in the womb (1). 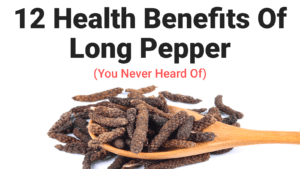 How to Consume Long Peppers

Depending on the type of issue you’re trying to improve, you can consume long peppers in a variety of ways. In order to improve asthmatic conditions or coughing problems specifically, you can try this: