Unless you’re the human embodiment of perfection, you have probably told a lie. We all have. It’s human nature to fib a little or omit the truth in order to save yourself from an uncomfortable conversation, embarrassment, or backlash.

“In all of our relationships – whether romantic, friendly or in the workplace – trust is a very important issue and necessary for a healthy relationship dynamic. Until you are in a genuinely committed relationship with someone you know well, and know has your best interests at heart, the only person you can really rely on is yourself,” says psychologist and life coach Honey Langcaster-James

In a relationship, people tend to lie to one another more than you might think. Here are some of the most common lies that people tell their partners.

Have you ever heard this phrase? Maybe you’ve uttered it yourself once or twice. This little white lie is one of the most told lies in a relationship.

“The one thing couples should never lie about is how they feel… Whether you are replying to the actual question or showing that you’re fine or good based on your verbal or body language, you must be truthful and open with your partner about how you feel,” says relationship coach Chris Armstrong.

Maybe you didn’t want to get into how you were feeling, or maybe you just wanted to avoid an argument. Either way, most people tell this lie once or twice (or more!).

2. How many partners you’ve had

Most people tend to fib on the lower side of how many partners they’ve had. Even if the number isn’t particularly large, or the list particularly long, we always want our current partner to feel special. If you’ve fudged the number of people you’ve been with, don’t worry. Everyone else is doing it too. 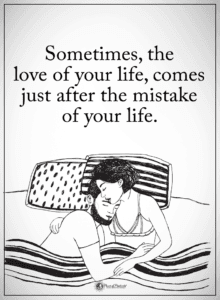 Not everyone gets along with their in-laws, or future in-laws. People tend to lie about how much they actually like their partner’s parents. They either do this to keep the peace, or because they really don’t see the point in telling the truth about their feelings. After all, for some people, blood is definitely thicker than water.

4. How much money you spend

“Couples should never lie to each other about finances. There should be an open discussion, agreements and transparency between the two of them when it comes to finances,” says psychologist Nikki Martinez.

Have you ever gone out on a little “treat yo’ self!” shopping spree, and then had to hastily hide the receipt and make up a lie about how everything was on sale? How much money that gets spent is one of the most common lies couples tell one another.

This little white lie is something we sometimes have to break out in order to not hurt our partner’s feelings. Whether you’re lying about the suit that looks totally hideous, or the dress that accentuates all the wrong features, lying about how your partner looks in something is probably the most common lie told in relationships.

6. You never think about your ex

We share our love and our lives with so many different people. Even if your last relationship ended mutually, or even if you were the one to call things off, your feelings don’t just disappear. It’s not a bad thing to think about your ex sometimes, and to remind yourself of the feelings you had. But, it might cause jealousy, so that’s why some people choose to fib about it to their current partners.

If your partner isn’t particularly skilled in the kitchen, you’ve probably mastered the art of chewing with a straight face … or getting to the kitchen to start dinner first. Most people lie about the skill of cooking that their partners have. After all, if they never try, how are they going to get better? Sometimes, a little white lie is a good thing.

“Many of us don’t want to hear the awful truth every time. Say someone asks you how she looks. She probably wants to hear that she looks great. If she doesn’t look great, and we tell her the truth, we create a conflict and have to deal with the results,” adds a study on the University of Rochester Medical Center.