No one sets out to lose an argument. We all want to be right when engaged in a verbal battle. Sometimes, it can get emotional or heated, and losing an argument can be a brutal blow to one’s ego.

The word “argument” has a lot of negative connotation to it, often bringing to mind ideas of shouting, slamming doors, and red faces. But arguments aren’t necessarily a bad thing. Sometimes, they are merely simple discussions over disagreements of opinion or debates about the next best course of action.

Still, regardless of the nature of an argument, your goal, if you’re one of those participating, will likely be to win. But you may have noticed that some people naturally win arguments, while others need to put in a little more effort to win.

The good news is that there are scientifically proven ways that guarantee you won’t fumble on your words or let your emotions get the best of you. It’s all about understanding yourself, your opponent, and proper debate etiquette. Here is the way science explains how to never lose an argument.

Science Explains How To Never Lose An Argument

“Raise your words, not your voice. It is rain that grows flowers, not thunder.” – Rumi

If you don’t start the right way, finishing as a victor won’t be nearly as easy. If you don’t want to lose an argument, pay attention to how you get into one in the first place.

Body language is highly important in communication. Most experts believe it’s just as important as verbal communication. If you’re trying to win an argument, you’ll definitely want to keep this in mind.

For starters, mirror the other person’s general body language in a subtle way. This can be as simple as crossing your legs shortly after they do or nodding at the same time. Don’t overdo it, of course! You shouldn’t be constantly copying every move they make or they might feel you are mocking them.

Done in the right way, mirroring can increase your opponent’s feelings of trust in you. This means that when it’s your time to start speaking, they’ll be more likely to believe you and find your points dependable.

You’ll also want to be mindful of the level of eye contact you maintain. It’s a common misconception that persistent eye-contact makes you more persuasive and your opponent less persuasive. Studies have shown it’s actually the exact opposite.

Your opponent in an argument isn’t necessarily your enemy. That said, “Know thy enemy” still applies here.

Knowing the personality of your opponent in an argument can help you understand how best to speak to them. There are some people who tend to be more reactive when responding to arguments. Essentially, appealing to emotion works best with them.

Then, there are others who are more analytical. With these people, you’ll want to make sure your facts are well supported and pay more attention to this than trying to get the opponent to empathize.

It’s also a good idea to keep in mind what your opponent’s moral alignment is. This includes their political preferences and ideologies. This can be complicated. Since there are so many things people can believe in, let’s make this simpler!

According to a framework created by social psychologists known as the moral foundations theory, people tend to see the world through binaries. This means they view things through very obvious positive and negative sides. The six most common of these binaries are:

Use these binaries to your advantage. As an example, an individual who is of a liberal political view will probably consider care vs harm and fairness vs cheating their go-to subconscious binaries. Meanwhile, those who are conservative in their ideals may see the world through loyalty vs betrayal and authority vs subversion binaries.

Being aware of these binaries will help you to present good arguments designed to appeal to your opponent. Instead of explaining things using binaries they don’t relate to, you’ll be appealing to your opponent’s ethics, helping them see things from your side.

Of course, we know you can’t always know a lot about your “sparring partner” beforehand. But if you do know them, use that to your advantage!

4.    Understand, Use, and Appeal To Emotion – Within Limits.

Although more analytical people prefer facts over emotional appeal, that doesn’t mean they aren’t still human. If you argue without any emotion, you’re showing yourself as more of a robot than a real person. This is a surefire way to lose an argument.

5.    Subconsciously Influence and Persuade The Argument.

There are plenty of ways to use cues to get an opponent in an argument to nod along. These subtle actions will influence your opponent on a subconscious level, persuading them without them even realizing it.

As mentioned previously, this research also concludes that mirroring body language correctly is a surefire way to never lose an argument. Mimic their movements and posture in balanced, subtle ways to encourage the other person to connect with you.

In addition, you can provide a prompt to your opponent to encourage them to agree. Use phrases like:

These types of prompts will allow your opponent to naturally try to see things from your perspective. In all likelihood, they will nod along, and this can even cause them to concede, giving you the positive outcome you desire.

Arguments can get emotional, but don’t let them get to you. Learn to argue and present points intelligently and in a calm, responsible manner.

Don’t forget to keep the atmosphere around the debate nice and positive. Find ground and beliefs that overlap and that both of you share. This can drop someone’s defenses, allowing them to be more easily persuaded. It also keeps the relationship you have with them intact!

When in an argument, always stay calm. Use a low, gentle voice and stay relaxed, speaking slowly and clearly. This will help you tame your personal emotions, especially if you tend to be a little hot-headed.

Raising your voice too much can trigger a fight-or-flight response in the person you are arguing with. This will immediately put them on the defensive and more difficult to convince. They will also probably find you less appealing and consider your overly emotional points less valid. 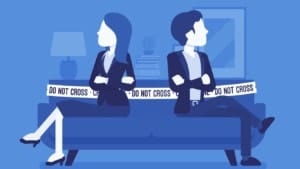 It’s important to keep in mind, of course, that not all arguments have to end with someone being right. Try and keep your frame of mind clear and practice positive thinking. Don’t focus so much on winning; treat debates as mere conversations. That way, you won’t be constantly worrying about the chance that you will lose an argument.

Finally, know when it’s time to walk away. Sometimes, an argument just goes nowhere. Ask your opponent if you can do anything that will help to change their mind. If they insist there is nothing, there is no point in carrying on the debate.

In addition, if things get ugly and your opponent becomes too aggravated, stay calm and walk away. You don’t want to get drawn into a full-blown shouting match. You can’t win every single argument you have, but there is no shame in a draw!

Final Thoughts On How To Never Lose An Argument

Most people don’t actively set out to engage in an argument. Sometimes, you just find yourself in one with no easy way out. Of course, you’ll want a positive outcome – no one wants to lose an argument, even if they prefer pacifism!

As with everything else, even arguments and debates are a science! By understanding the scientific ways that guarantee a positive outcome your arguments – or at least that you’ll emerge the bigger person – you’ll achieve victories with dignity.

Related Items argument effective argument how to win an argument
Power of Positivity uses cookies to give you the most relevant experience. For more information see our Privacy Policy.
Continue
Manage consent