Arguments can get heated, and it can happen quickly. Within moments, a slight disagreement can turn into a nasty argument. Usually, this is because the emotional states of those involved begin to heighten. You want to be able to control your emotions during any situation, but most importantly during an argument. Not only will controlling your emotions in an argument make you seem more clear-headed and knowledgeable, but it will also help keep the argument from getting out of hand. Here are some of the best ways to control your emotions when a discussion starts getting heated.

Here Are 5 Ways to Control Your Emotions in an Argument

“It’s amazing how issues of hurt feelings or differences can be resolved with a whisper. I counsel couples who are yellers to only communicate with a whisper and it greatly reduces the anger factor in their relationships.” – Barton Goldsmith, Ph.D

Even in an argument (perhaps especially in an argument), you should try to take a step back. Take a breath, relax those tense muscles, and try to look at the situation from a calmer or more objective point of view. Dr. Carmen Harra, a clinical psychologist, believes that staving off your immediate reaction is one of the first steps to being able to control your emotions. This is especially relevant during an argument.

Taking the time to breath and center yourself will allow you to react in a calmer and more appropriate manner. Reacting right away can lead to saying things you would otherwise regret if you weren’t in a highly emotional state of mind.

Purposeful breathing will help to take you out of the immediate situation and put you back in your body. Many people use breathing techniques as a way to control anxiety and panic attacks, therefore it’s no wonder that breathing can also be used to manage your emotions in an argument. Breathing is a technique known as “mindfulness,” which is used to keep you in your mind. It assists in keeping you centered.

You don’t have to breathe mindfully for a long time. In fact, just breathing in for a count of five, and out for a count of seven will be enough to calm you down. In addition, breathing can help make sure you don’t react immediately, and it will keep you focused on the more important issues at hand. 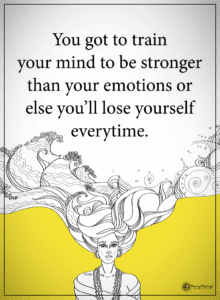 Raising your voice can be a gateway to losing control of your emotions in an argument. If you know that you tend to yell when you’re upset, try focusing on keeping your voice low and even. This will force you to keep your mind on what you’re saying and how you’re feeling, rather than letting your emotions control the volume of your voice.

Keeping your cool during an argument is all about being mindful of your emotions and body. Barton Goldsmith Ph.D states that many arguments which often result in raised voices and yelling can be resolved much more easily by whispering.

When all else fails, it’s time to take a break. Emotions in an argument can get high, even when we’re doing our best to control them. If you feel your emotions starting to get out of control, the most responsible thing to do would be to call a timeout on the discussion. Allow yourself time to sit back, recognize your emotions, and process them.

Never feel that you have to sit and go back and forth in an argument until it’s completely resolved. In fact, taking a break and allowing both parties time to relax and de-stress serves as a major factor in being able to better control your emotions during an argument.