Most people wake up to a warm cup of joe in the morning to give them a much-needed energy boost. For others, coffee serves as a source of comfort and routine practice. However, some studies have found that large amounts of caffeine can harm our bodies and minds. After all, caffeine is still a drug, and with the current popularity of energy drinks, one of the most widely consumed of them all.

What the FDA says about coffee and caffeinated energy drinks

According to the Food and Drug Administration (FDA),

The FDA states that a 5 oz (small) cup of coffee contains 60-150 mg of caffeine, depending on the darkness of the roast.

Small amounts of coffee have negligible side effects, but it still raises cortisol and adrenaline, which activates the fight-or-flight response. Many people report feeling calmer and less restless without caffeine in any form. In our on-the-go society, most of us resort to caffeine to help us get through the day, but perhaps we should ask ourselves why we feel the need to keep such a busy schedule in the first place. Instead of needing more caffeine to power through the day, we could carve out more time for ourselves to rest. However, I digress, back to talking about coffee.

Caffeine is classified as a drug as well as an additive, according to the FDA. Plus, it is still one of the most widely consumed sources of caffeine in the world. Even though it’s a drug, it does not seem to cause harm in most cases, so the government does not regulate it.

However, just like other drugs, caffeine can cause withdrawal symptoms and fall under a substance abuse disorder, according to the American Psychological Association’s Diagnostic and Statistical Manual version 5. Using large amounts of caffeine to the point where the user feels physical and mental symptoms classifies it as a substance abuse disorder.

Benefits of trading coffee in for natural energy drinks

If you’ve been looking to give up coffee, here are some reported findings of benefits you might notice after just seven days:

– Feeling more alert in the morning without restlessness

According to the American Society for Pharmacology and Experimental Therapeutics, caffeine from coffee can affect sleep, alter mood and blood flow in the brain, your metabolism and genes, and the neurotransmitters in the brain that affect memory processing and cognitive performance. Their research found that ‘Peak plasma caffeine concentration is reached between 15 and 120 min after oral ingestion in humans.’ Also, keep in mind that caffeine takes about six hours to leave the body altogether, so if you have an afternoon cup, it may still be in your system when you go to sleep. This might be contributing to the insomnia epidemic sweeping the globe, in combination with other factors such as stress and using technology at night.

While many people believe that caffeine helps them function better, studies have shown that it doesn’t help in all cases. The above-cited research found that  ‘An increase in arousal improves the performance of tasks where relatively few sources of information have to be monitored, particularly under conditions when the need for selective attention is stressed by time pressure. When, on the other hand, multiple sources of information or working memory have to be used, an increase in arousal and attention selectivity has no apparent beneficial effect on performance, which may consequently even decrease.’

One of the metabolites of caffeine in the body is paraxanthine. Paraxanthine blocks the body’s adenosine receptors, which then raises epinephrine levels in the blood and diastolic blood pressure. So, in other words, when you drink coffee, your body responds as if there is a threat and activates the fight-or-flight response. This explains how so many people get through their days on caffeine because they’re running on pure adrenaline.

So, now that we’ve gone over the potential dangers of coffee and how it can affect the mind and body, what are some alternatives? We will go over six natural energy drinks you can make in the morning that will give you just the boost you’re looking for!

THESE SIX HEALTHY, NATURAL ENERGY DRINKS CAN IMPROVE YOUR MOOD AND BOOST YOUR ENERGY LEVELS

Both bananas and apples provide a ton of vitamins and minerals, and the natural sugars will give you a huge boost of energy in the morning! Bananas have a ton of potassium and B vitamins to help boost brain health and increase stamina. Apples contain a lot of potassium as well, and also Vitamin C.

Directions: Mix all ingredients in a blender until smooth and serve the energy drink chilled.

Kombucha – a type of fermented green tea – contains probiotics, vitamin K-2, vitamin B-12, and fatty acids. The last two ingredients are very beneficial for a healthy brain. Keep in mind that making it yourself can be dangerous if you don’t follow the recipe exactly, or use ceramic wares to make it. Lead from these containers can seep into your kombucha, so avoid ceramic at all costs. Also, be sure to clean all other containers you use prior to making the tea, so harmful mold doesn’t form in the mixture. 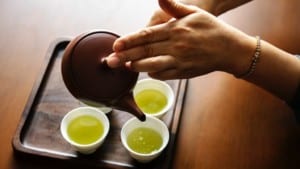 Directions: First, place the SCOBY in a glass jar and set aside. Bring your water to a simmer and mix in the tea. Add the organic sugar (or sugar substitute) and boil for about 15 minutes over low heat. Allow the mix to cool before pouring it into a glass container. Place a rubber band over a paper towel or coffee filter and put it on top of the jar. This will allow the mixture to breathe and ferment. The culture will develop in seven to ten days.

Lemon water aids in digestion and detoxification, adds a healthy glow to the skin, promotes weight loss, boosts energy and mood, enhances immunity, and helps to prevent kidney stones. Lemons also provide 187% of your daily Vitamin C and a good serving of potassium, magnesium, and copper. 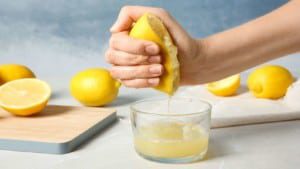