The choice to eat healthy can be multifaceted.  You can choose to eat specific healthy foods due to allergies, like gluten or lactose.

Or, you may choose any one of the various vegan diets for moral reasons. Those reasons may be related to the inhumane treatment of animals, the chemicals injected into the animals, or the overwhelming articles emphasizing the importance of increasing vegetables, fruits, and whole grains in our diet.

Of course, there is always the choice to eat healthy because you want your body to be a robust, clean, fighting machine.  Whichever your reasons are, eating primarily clean is a good life choice.  Until it’s not.  Psychology explains how eating healthy can become unhealthy.

Eating disorders entail a variety of symptoms characterized by unusual or disturbing methods of eating.  Most of them consist of an obsession with food, body weight, or body image.

Excessive exercise generally stays constant. In any of these eating disorders, women or young girls are the primary candidates.  13% of youth by the age of 20 develop some form of an eating disorder.  Their views of their bodies become incredibly distorted.  What may start as trying to lose 10 pounds gains compliments. And that can quickly accelerate into being skin and bones while still feeling they are not thin enough.

There is a multitude of psychological and biological reasons which are the driving force behind eating disorders.  Thus far, nothing proves conclusive. Furthermore, science must assess each case individually for emotional, mental, and physical causes.

The overwhelming articles focused on food, diets, exercise, probiotics, prebiotics, organic living, and more can be challenging to sort out when you are trying to decide how to become healthy.  Eating started a relatively straightforward concept.  “I am hungry, so I’ll get food, make food, and eat food.”

Then, we added knowledge about fats and various types of fat, which meats are leaner, unhealthy carbs, processed foods, and sugar. We learned how stress affects your digestion and how to augment your diet to rebalance your system. Also, knowledge about the importance of ridding your body of toxins to both help it operate better plus decrease aging came to the surface. Not to mention the 8 x 8 water rule, counting calories, and calculating BMI.

I could probably write 1500 words just on all the various methods science presents to people regarding how or why to eat differently.   Within those messages are the holistic, most organic, safe, and nutritious manners of preparing the food.  Proper preparation can almost be like a religious ritual with your body as the alter.

To add the cherry to the top, now you need to maintain this method while at work and out with friends who may not share your enthusiasm for your diet of choice.  Which restaurants allow you the most options or any options?  Should you pack a meal?  Remember, you need to get home in time to prep your food for meals tomorrow.

Despite all the confusing and never-ending information about diets out there, life is about balance.  This should include your diet, as well.  When your lifestyle of food choices, preparation, and exercise has consumed your life, your diet is no longer healthy.

Orthorexia Nervosa is the newest recognized eating disorder characterized by having an obsessive relationship with eating healthy.  Life is wholly focused on adhering to the strict regiment of your diet and lifestyle to the detriment of your social life, choices, and potentially your health.

The term Orthorexia first became a recognized term in 1998.  It literally means “an obsession with proper or “healthy” eating,” as defined by the National Eating Disorder Association. While yet to be placed in the Diagnostic and Statistical Manual (DSM), it is still accepted by many physicians as an eating disorder.

Being still relatively new, exact diagnostic criteria has not been officially established, but specific symptoms are recognized as warning signs:

The danger of malnutrition stems from this condition

Due to the frequently food-limiting symptom of this diet, malnutrition often becomes a side effect of orthorexia.  A few of those symptoms are:

Science Daily published a study performed at York University’s Faculty of Health.  The researchers had compiled all reviews of orthorexia up until 2018 from two major databases.  One of the scientists, Jennifer Mills, an associate professor in the Department of Psychology, reported:

” When taken to the extreme, an obsession with clean eating can be a sign that the person is struggling to manage their mental health.”

The report stated that earlier reports had shown that while anorexia nervosa was about counting calories to reduce body weight to an extreme, orthorexia has a focus on the quality of the food and its preparation.  It becomes like a ritual in that more and more time is spent planning, purchasing, and preparing healthy meals.  This ritual becomes obsessive in daily life.

A connection between trying to eat healthy and obsessive behaviors

Additional previous reports indicated that individuals who had obsessive-compulsive traits, depression, previous eating disorders, or a tendency to be zealous regarding their body image and appearance were particularly susceptible to developing Orthorexia Nervosa.  Particular diets, which already require strict adherence and are not easily socially available, tended to sway individuals toward a more obsessive eating pattern.  For example, Lacto-Vegetarianism creates the highest risk of leading people toward an eating disorder.  These diets tend to require a particular eating schedule and long preparation time.

One trait that Orthorexia has, which is slightly different than the other eating disorders, is that it affects males and females equally.  On the other hand, most consider anorexia and bulimia as primarily affecting women.

The acceleration from eating healthy to Orthorexia Nervosa

Our society places a heavy emphasis on appearance.  That plays a role in how you dress and how your body looks.  While we are in the throes of trying to change the body image from looking thin to being healthy or comfortable with your body, it is a tough transition.  The media still upholds the false notion that particular body shapes are beautiful and sexy.  This ideal goes for men and women.

The sway from looking thin to having moderate fat body mass with taut muscles is an improvement in that it is encouraging the idea that weight is misleading, and being healthy includes muscles. It also shows that being healthy on the inside is equally important. This idea, combined with the awe we feel that someone can be as disciplined and committed to their health, can contribute to orthorexia.  Such self-discipline is an admirable trait and one not many of us possess.

When an individual first starts on making these dietary choices, not only do they get the internal rush from their pride, but others around them compliment and praise them.  This attention may further motivate them toward adhering to the diet.  In most cases, people achieve this in moderation.  In some cases, however, the person triggers an underlying mental weakness or illness, leading to an eating disorder like Orthorexia Nervosa. 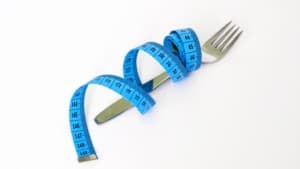 Final Thoughts on the Choice to Eat Healthy Versus Unhealthy Obsessions

Deciding to eat healthily is a good choice.  Science can back that up imperatively.  Yet, we still don’t fully know the actual consequences of many of these diets.  We have yet to learn the ramifications of eating vegetarian on our bodies.  It might take researchers years of studying hundreds of thousands of individuals being considered over decades before concluding.

The one thing that life does consistently show is that everything requires a balance.  Eating meat is not “bad.”  Only eating meat without vegetables and some carbs is not healthy.  When you find that your healthy diet is ruling all your time, your friends, and your social activities, then your healthy diet and its requirements may not be truly healthy. There are a lot of healthy, balanced diets available that have been proven to aid in losing weight and increasing body function and do not require you to waste your life obsessing over food preparation or quality.   Eating healthy can become unhealthy, and that was never the goal.