Eating disorders weren’t always so publicized. However, that all changed on February 4, 1983. Famous singer Karen Carpenter died of heart complications following a lengthy battle with the eating disorder anorexia.

Her story was a turning point in the recognition and treatment of such disorders. Her life was spiraling out of control due to a demanding career and undue stress that she couldn’t control. She felt pressures from society to look and be perfect, and the strain of the disease eventually took her life.

When it comes to eating disorders, it’s hard to pinpoint exactly why they happen. For some, it’s a biological issue, others a psychological problem, and then there are social factors that come into play. What the medical community knows is that you can’t catch an eating disorder like the flu or a cold.

Instead, it’s a conscious choice at first that soon spirals out of control. To treat an eating disorder, you must get to the root cause, and address those underlying issues. Here are the top ten reasons why a person develops bulimia, anorexia, or obesity.

Reasons People Get An Eating disorder

The society we live in sends out a message that if you can’t be overweight and beautiful. It’s very easy to develop body frustrations, which can turn into an eating disorder. Ever walked by a register at the checkout and seen all the swimsuit models and picture-perfect people portraying society on magazine covers? It’s overwhelming to many people who know they will never compare.

The media puts a significant focus on being toned. They over-emphasize looks and put health to the side. It causes some people to fear food and being fat as they know they won’t fit in. There is no real way to fix a cultural issue except to bring awareness through Hollywood that it’s okay to be comfortable in your skin. However, it’s highly doubtful things will change.

When it comes to an eating disorder, the environment a person lives and works in means everything. If a person works in an office with people who are health-minded and all about fitness, then they may feel that they need to keep up with the office staff. What about a person who feels they are being held back because they have a weight problem?

They may turn to bulimia to help them move up the corporate ladder. It’s well known that women usually suffer from eating disorders like bulimia or anorexia more than men. They binge because they love the taste of food, but they quickly dispose of it so there is no lingering implications. Part of this can be due to fears or inadequacies that she experiences on the job. Her environment means everything.

What if she is in an abusive relationship where her husband, father, or friend is continually belittling her? She may avoid food to try to make herself less of a target to family and friends.

3. Being Involved in Physical Sports

It’s not uncommon for people to enjoy competitive sports. Whether it’s running, dancing or gymnastics doesn’t matter. The pressure that comes along with needing to be great can often be daunting.

Some people will starve themselves to perform better. They feel that an extra ten pounds off their frame will improve their game. It can especially be a problem if there are others with the perfect body who seem to excel at their sport.

This poor self-image must be dealt with as it can ruin this and many other aspects of a person’s life.

Though there have been significant strides made in ensuring that bullying is brought to light, it still happens every day. Bullying doesn’t have to be in a classroom at a high school; it happens in an office and workplaces too. If a person has a few extra pounds, it’s not uncommon for them to be teased.

Snide comments from colleagues can be hurtful. Someone who is always picked on may want to do something drastic to change their appearance. It’s best to stand up to bullies and not let them influence one’s view of themselves.

If a parent has an eating disorder, then the chances are good that one of their children will develop it too. Take for instance obesity. How many times do you see several people in the family who are overweight?

It’s a proven fact that eating disorders run in families. Some chromosomes have been linked to eating problems like anorexia. Also, twins seem to have a higher chance of developing such a condition, more so than traditional siblings.

It seems that serotonin is blamed for a lot of things that can go wrong in the body. When it comes to eating disorders, the medical community believes that an imbalance of certain chemicals can affect things. For instance, chemicals in the body regulate stress, mood, sleep, and even one’s appetite.

Studies have found that some people with bulimia have a higher level of cortisol than the general population. When the body is in a constant state of stress, it may cause a person to do things they wouldn’t normally do. Those with anxiety tend to be on edge, and antidepressant medications are great for helping to bring chemicals back into alignment.

Those that are depressed, anxious, or have other mental health issues, are more likely to be caught up in the clutches of an eating disorder.

Let’s assume that a woman’s husband left her for a woman half her age. This lady may feel downtrodden and have low self-esteem. She may try to perfect her body for her husband or some other man to find her attractive again. What starts as a few small vanity pounds can quickly spiral into a compulsion that changes her life. 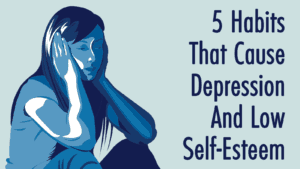 The problem with those who suffer from anorexia or bulimia is that they always see an overweight person even when they are skin and bones. Seeking perfectionism from low self-esteem can ruin a life.

8. Trauma or Past Abuse

If there are family and other relationship problems, as well as lingering effects from a turbulent childhood, then it can cause esteem issues that come with unwanted issues. Additionally, complications with both physical and sexual abuse can also cause significant problems that lead to eating dysfunction. People who have experienced any trauma use food as coping mechanisms or they will starve themselves to have a body they can be proud of.

Cognitive behavioral or trauma based therapy can help to erase the negative connotations that abuse has caused.