By Power of PositivityPublished on September 06, 2018Last modified February 10, 2020

Perhaps you wonder what a free thinker even is. Well, look no further:

Do you remember those cliques from high school? Most of us were part of one – and then we “grew up.” Well, that’s what we like to think anyways. But the truth is that most of us would rather conform. More on this in a bit.

Most people have what is called a “herd mentality.” Wikipedia defines the term “herd mentality” as people adopting “certain behaviors on a largely emotional, rather than rational, basis.” Multiple studies have confirmed – and re-confirmed – the presence of a herd mentality.  Consider this study by researchers at Leeds University in the U.K., aptly titled “Sheep in human clothing – scientists reveal our flock mentality”:

“… it takes a minority of just five percent to influence a crowd’s direction – and [the] other 95 percent follow without realizing [sic] it.”

Scientists instructed everyone participating in the study to simply walk around the school’s halls without talking or gesturing to one another. Researchers then secretly instructed a few students to act confidently and walk in a certain direction, as if they knew where they were going. The result: those who weren’t given “special instructions” followed – all of them – without knowing it.

Psychologists and other experts have their theories on why people would rather follow. First, we don’t like the idea of being wrong, especially when we’re in a large group. Second, we fear being left out. After all, we’re social animals – and we’d rather “go along to get along.” Third, it is much easier on our cognitive resources. Decision-making is exhausting, and our brain would rather take a shortcut rather than having to sift through information and find a solution.

Being a Free Thinker

“Freethinkers … are willing to use their minds without prejudice and without fearing to understand things that clash with their own customers, privileges, or beliefs. This state of mind is not common, but it is essential for right thinking.” –  Leo Tolstoy

Being a free thinker is not easy, especially today. While the reasons for such are too numerous to list, we can confidently point to the political establishment, academia, social media, and overzealous religious groups as not only catalysts of the herd mentality, but proponents of it.

But we do have free thinkers in our midst – and, by being a Power of Positivity follower – you may well be one!

Check out these 7 behaviors that reveal you are a free thinker!

You don’t take things at face value – and you pride yourself on such. Chances are you were one of those kids who was always asking “Why?” until your parents told you (forced you) to go nighty-night. Fast-forward to present day and you’ll realize that not much has changed! But instead of asking why you must eat vegetables, you’re doing more important stuff. Maybe you’re remarking on the bias of some news story, scoffing at a politician, or refusing to go along with a group idea. These are all signs of free thinking!

You Love to Read

Reading books adds to your knowledge base – and you love knowledge! As we’ll get to later, you – more than most people – know what you don’t know. But besides acknowledging what you don’t know, you actively seek out the source of knowledge. Intellectual curiosity is a personality trait that every book lover shares.

We’ll tread carefully here – and with the utmost respect to those with religious beliefs. With that said, free thinkers are much more likely to report being be spiritual or agnostic.

An observation: many self-purporting (promoting?) atheists are some of the most anti-free-thinking individuals on the planet. It’s as if, by their non-belief in a higher power, that they are somehow intellectually superior and therefore given a free pass into the “free thinking club.” (See: Dawkins, Richard)

You Admit What You Don’t Know

None of us have all the answers. But some of us sure like to think we do. Worse, when we think we know everything, even if we’re utterly wrong, we’ll go out of our way to prove how wrong right we are! This is called the confirmation bias. 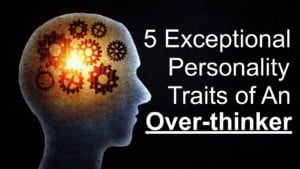 You Enjoy a Good Debate

Oh, boy do you ever. While some people may be content that no argument was hatched – and nobody’s feeling hurt – you couldn’t care less. If the truth needs to be told, you’ll tell it. You won’t adjourn anyone until you’ve made your point, feelings be damned!