How a person behaves in a relationship can determine the kind of love and affection they have for their partner. If you’ve got a man who’s in love with you, his positive behaviors will be evident even if he doesn’t say “I love you” often.

The action does speak louder than words for a man who is truly in love. And his behavior will set him apart from the selfish and narcissistic types who have yet to mature in the way they handle their relationships.  So, if you’re wondering if your man loves you when he doesn’t express much in words, here are some signs to consider from his actions:

“A real man never stops trying to show a woman how much she means to him, even after he’s got her.” – Anonymous

1.    He cares about the other people in your life, like your family and friends.

A man who’s in love with you will value your family like his own and won’t have any issues with your friends.

According to a study in the Journal of Marriage and Family, a healthy relationship is when couples know how to spend time apart with other people. They don’t demand the fulfillment of all their existential needs from just one person. They are okay if their partner wants to get together with her group of friends regularly or spend time with the family. 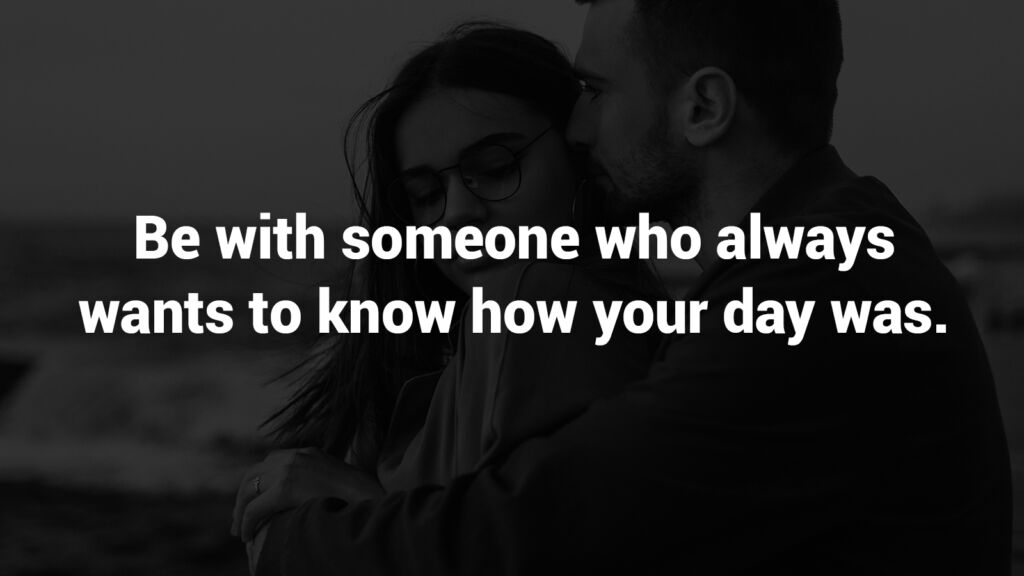 2.    He’s happy and proud for your achievements.

Your success is also his success so he is always happy and proud of what you’ve achieved. He doesn’t see you as a competition. He doesn’t grow envious when you’re doing well at your job or other commitments outside of your relationship.

Futhermore, he doesn’t exclude you from his own success even if you don’t have any direct connection to his work. He acknowledges that your presence in his life adds value. You’re the reason he keeps pushing himself to reach his goals, and he considers you as an important part of his success.

Some relationships suffer from the competitive marriage syndrome (CMS), where one partner is focused on outperforming the other to establish his place in the social hierarchy.

There’s a positive aspect to CMS because it can be a motivating factor for an individual to accomplish more than he thought possible. But the need to outdo each other is sometimes the reason couples split. Competitive marriage syndrome is higher in a relationship where both are professionals who are prone to prioritize work over their partner.

3.    He’s not afraid to show his vulnerability to you.

Some people think vulnerability is a sign of weakness. In the world of toxic masculinity, young men are told to suck it up and never cry if they get hurt. It seems as if exposing their weakness might make them less of man.

If you have a guy who is not afraid to show his weak spots before you, that’s love. If he’s not afraid to open up to you about his fears and worries, or his flaws and embarrassing habits, that shows he trusts you. He lets his guard down because he knows he can be real around you.

It takes an authentic effort to show feelings you’re not proud of, knowing you might be allowing yourself to get hurt or embarrassed. According to clinical psychologist, Lisa Firestone on Psychology Today, couples that expose their feelings to each other can grow a lot closer. Being vulnerable to your partner is one of the secrets to a happy union.

A man who truly loves you will step out of his comfort zone. He’s not in this relationship to look for what he can get out of it. Instead, he’ll put your needs above his own because he wants to make you happy.

He’ll willingly sit down and help you decide if moving to a different state for your job would be a positive step. He’ll let you pick a romantic movie to watch together even if he really wants to see an action film.

Sacrifices are inevitable in a committed or close relationship. In fact, sacrifices are the very definition of being truly in love and involved with a person. Relationships stand the test of time and face the challenges of life better if couples are willing to make sacrifices to please their partner.

A man who loves you will be protective of you. Being protective comes instinctively for him and he will make you feel safe in the physical and emotional sense. A man in love will fight for your love because he is afraid of losing you. He’ll face any challenges if that will mean keeping you in his life.

But he’ll also fight with you to avoid losing you. If he’s invested in your relationship, he will want to discuss your issues even if that means he’ll end up arguing with you.

According to relationship expert and author Joseph Grenny, couples who do not argue are avoiding fixing the problems of their relationship. Unfortunately, most couples break up because of this poor communication. Grenny also told The Guardian that true love needs a lot of work. So, while arguments may be crucial, it brings to the surface the kind of intimacy, trust, and connection couples need to stay stronger.

Not all arguments are destructive. In a relationship, it can be positive if the people involved do the following when they fight:

He’s not just a good listener when you’re pouring your frustrations. He also pays attention and knows the little things to do that will light up your eyes. And when he gives you gifts, he’ll put some thought in it and not just pick out random stuff at the store to shower you with material things.

He surprises you with a bouquet of roses for no reason other than to please you when you’ve had a bad day. You find a new pair of shoes because he heard you complaining about blisters from your worn sneakers. He’d rather hang out with you than be with his buddies to watch football if he knows you’ve just had a fight with one of your friends.

The thing about men is that they are action-oriented. They aren’t verbal beings compared to women so they use actions to show their feelings more than words.