The word ‘trauma’ is a derivative of the Greek word for ‘wound.’ This term, of course, encompasses physical, psychological, and emotional ordeals. One commonality between all types of trauma is that it interferes with the daily functioning of a person’s life, sometimes to a severe degree.

“Trauma is the glimpse of truth that tells us a lie, the lie that love is impossible, that peace is an illusion.” – David Morris, author

From nearly the beginning of the 21st century, people have had to deal with conflict increasingly. Without a doubt, the individuals that have suffered the most have been the men, women, and children placed in harm’s way. In addition to the obvious physical damage caused by war, there is a high psychological cost.

Post-Traumatic Stress Disorder (PTSD) is a form of psychological trauma that is most commonly associated with war or violence.  While this may have brought the condition to the surface, there are various reasons why someone develops PTSD. The condition usually results because the person saw or lived through a dangerous event.

For children who experience PTSD, symptoms may include: bedwetting, re-acting the event, being clingy with a parent or adult, and loss of verbal skill. Teens often experience symptoms closer to those of adults. Regardless of age, symptoms can be reduced.

PTSD is one obvious form of trauma, but there are many others. Some other situations and events that can lead to trauma include:

Regardless of the type of trauma experienced, there are ways to cope. You can build a positive life after trauma…any trauma.

Here are 8 ways to build a positive life after a traumatic event.

1. Remember that your past does not define you.

When someone experiences trauma, they become haunted by the event for a long time. Given the nature of what trauma sufferers have seen and experienced, this is understandable. Acts of violence, disaster, and war are absolutely abhorrent events for someone to live through.

Remember this: your past does not define who you are. The brain is very adept at replaying events that strongly impacted your life – this includes trauma. This cannot be stated enough and is a recurring phrase on this site: be present. Study meditation, prayer, spirituality…whatever you need to do to keep your mind focused on the present. You can do it.

2. Forgive yourself and others for past hurt and resentment

This is understandably difficult, especially those that have experienced acts of violence. Just remember that you don’t have to forgive someone because they deserve it, …but because you deserve it. Forgiveness can liberate you from the resentment and anger occupying your heart and mind, allowing you to replace it with something far better.

Again, forgiving others is not about them; it’s about you. Holding onto anger and resentment damages you far more than it does who committed the act. Release and let go of this negativity, my friend.

3. Take time for self-love and self-care

Of course, be good to yourself by taking care of your body and mind. Do things that cater to your physical and mental health – exercise, meditate, eat healthily, etc.

People who experience PTSD, including soldiers in combat, have experimented with mindfulness meditation and found it to be beneficial. According to Dr. Elizabeth Stanley, a professor at Georgetown University, and former U.S. Army Captain, “It’s clear that mindfulness can lower stress in many contexts. We (also) think it can work for soldiers dealing with the extreme stress of combat.”

Please see the article about making self-care a top priority. You will find many additional good tips.

This is another area where meditation may help in dealing with trauma. Negative thought replacement is an actual method designed to reduce the amount of depressive and negative thoughts.

It’s normal not to believe new, introductory thoughts at first; however, making a habit of introducing new thought patterns works it one keeps at it. According to a study in Psychology Today, speaking positive thoughts aloud creates two forms of memory replacement. 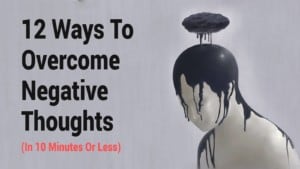 What a beautiful quote, one that is directly applicable to those affected by trauma. This may be one to commit to memory.

Again, in dealing with trauma, healing will not happen quickly. You must remember to be patient and gentle with yourself while allowing the process to unfold. It is important not to be harsh with yourself. Indeed, you’ve already experienced enough.