There are amazing, quality women everywhere, but this isn’t always apparent when we’re in the dating phase. In fact, dating one woman after another can lead someone to believe that quality women are few and far between. (The same can be said for dating men as well.)

If you’re “on the market,” it’s likely that you’ll meet and interact with all different types of women – and most of them are good-hearted. Sure, a few bad eggs will rear their not-so-lovely heads, and this too often leads to stereotyping. Intelligent as human beings are, many of us are rather clueless about the opposite sex.

In this article, we focus on some of the common traits of quality women. We hope that the content is entertaining and insightful; perhaps even useful.

Here are some of the telltale signs to look for in a partner.

1. She takes care of herself

A woman who takes pride in her herself garners immediate attention and respect. She’s responsible and accountable for what she does and doesn’t do and refrains from undeservedly blaming anyone for anything. This kind of woman is reliable, hard-working, and confident.

2. She’s comfortable in her own skin

That sort of woman knows her own self-worth and has the confidence to back it up. Though she may be insecure at times (she’s only human), she’s able to look into the mirror with pride. This woman is also intelligent enough to realize that her opinion about her appearance is the one that matters.

3. She has a strong sense of independence

In other words, she doesn’t NEED you – and this is a positive thing. An independent woman isn’t reliant on anybody for her personal needs. She hasn’t fallen for you just so that you could provide for her financial, mental or physical necessities. The woman has entered the relationship as an equal partner – and is willing to shoulder the burden at any time if need be.

4. She isn’t self-absorbed or self-centered

Of course, a quality woman is not self-absorbed or self-centered. Quite the opposite, actually – she often gives more than she takes and puts others before herself. In a relationship, this woman’s selflessness is evident. She wants love, honesty, and respect for you. 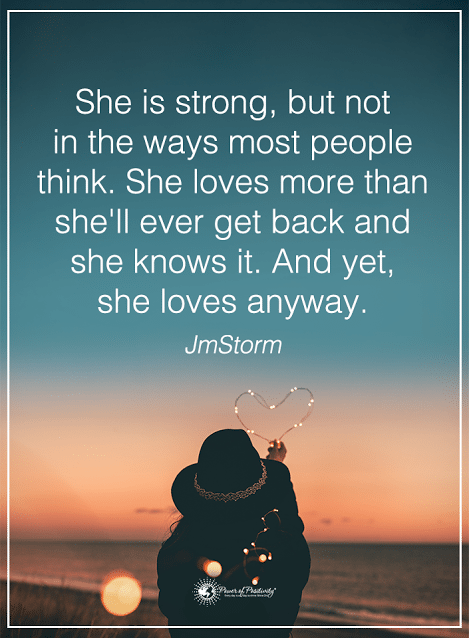 Theatrics do not interest a quality woman – something that reinforces her high level of maturity. This woman will not play childish games, escalate a conflict, or seek to make you jealous. It’s not an understatement that she probably despises unnecessary drama as much (if not more than) you do.

6. She inspires you to be the best version of yourself

A quality woman knows what you’re capable of becoming, and will encourage this without making a fuss about it. She desires you to reach your full potential because she both loves and respects you and your abilities.

7. She is level-headed about conflict

As a refined, mature, and intelligent woman, she understands the inevitability of occasional conflict. Something that separates a quality woman from the rest is that she remains logical and poised about the situation. She encourages and anticipates an amicable solution to whatever conflict may surface.

She is not afraid to make her opinions known and stick to her guns. She also possesses the knowledge to articulate her beliefs. Perhaps most important, she is tolerant of others and actively listens to what they have to say. In the context of a relationship, her opinionated yet open-minded outlook means she doesn’t require validation; nor does she expect you to appease her.

9. She’s real when it comes to intimacy

Quite simply, a high character woman isn’t bashful about intimacy. You’ll know when she’s ready for the next step, and she isn’t shy about stating what she is and isn’t comfortable with. A quality woman approaches intimacy as she does with many other things: with collectedness and maturity.

10. She always seems to leave a positive impression

As mentioned, a quality woman possesses great character. She’s confident, smart, open, honest, and loyal. For these reasons and others, she never ceases to leave a good impression on people. Odds are most – if not all – of your family and friends admires and respects her.

11. You feel extremely fortunate to have her!

But of course! Why wouldn’t you feel lucky to have a woman with such qualities? You should also feel a bit of pride because a woman of this status wouldn’t date someone who didn’t “measure up.” If she’s willing to share the rest of her life with you, count your blessings.

Related Items quality woman relationship signs of a good woman signs of a quality woman
Power of Positivity uses cookies to give you the most relevant experience. For more information see our Privacy Policy.
Continue
Manage consent