The mind is a powerful thing, but it is also easily swayed. That’s why, if you understand human psychology even just a little, you may enjoy more fruitful interactions with others. There are plenty of brain hacks you can use that will help you achieve the desired effect. These psychological tricks can help your persuasion skills, improve others’ perceptions of you, and give you an extra edge in any situation.

But where can you start? How can you learn to do these amazing hacks? To get you started, here are some psychological tricks that really work, and how to do them.

If you have a feeling that someone you spend a good amount of time around dislikes you, there’s a way to reverse that. All you need to do is ask for a small favor. Yes, really!

The trick is to ask for something very, very small. It has to be something that wouldn’t make sense for anyone to say “no” to. For example, you might ask to borrow a pencil or a pen from the person in question. Other small favors you can ask for include:

Why does this work so well? It’s simple. Although this person doesn’t like you, they realize that saying “no” to something so small would make them look like a bad person. Plus, small favors, in general, are difficult for most people to say no to.

Ask for a similar favor every now and then – not too often! – and the person’s subconscious will realize that if they are helping you, you must not be that bad. This will help them think in a more positive way of you.

There are few things more annoying than getting a song repeatedly stuck in your head. The repetitive melody can be extremely irritating, and no matter what you do, you just can’t make it go away.

A lot of the time when this happens, you don’t even fully remember the song at all – so all you hear are the same few lines over and over and over again. This problem, often referred to as an earworm, actually has a surprisingly simple solution!

All you have to do is apply knowledge of the Zeigarnik effect to the replaying song. This psychological effect states that the human brain retains information of incomplete things for a long time, but tends to forget them once the task is complete.

To do this psychological trick, just go and listen to the song that is stuck in your head to completion. Once the song is over, there’s a good chance your brain will finally let the tune go!

Do you ever wonder if someone is watching you? Sometimes you might think someone has their eye on you but can’t be sure. After all, you don’t want to assume, and directly asking would be pretty awkward for both you and the person in question. There’s one simple solution to this dilemma.

So, how does this work? Essentially, yawning is contagious. If you see someone yawning, you tend to feel the urge to yawn as well. Watch a video of someone yawning and see what happens. Even if you don’t yawn, you’ll find yourself really wanting to! This is one of those psychological tricks that works so well that sometimes just reading the word “yawn” can cause you to yawn.

Cheating at a game isn’t something we’d typically condone – but if that’s up your alley, here’s another of these psychological tricks that can help you to win games of rock-paper-scissors.

Sometimes, people use the rock paper scissors games to determine who does what, or as part of a bet. This is when this trick will come in handy! It’s all about confusion.

Right before you and your opponent are about to go for it, distract them by asking them a question. It can be a completely random question, or something related to what you’re doing – bu  the more confusing the better!

Your opponent caught off guard, will immediately become at least a little puzzled. Now, quickly, before the moment passes, start the chant for the game and say, “Rock, paper, scissors!” Your opponent will likely be confused or defensive, and either way, they have a good chance of automatically choosing “scissors.” Just make sure you’ve picked “rock” to win!

When you ask someone whether they either want to a) do something, or b) not do something, you’re giving them an easy way out of the situation. So instead of saying that, use psychological tricks to get them to agree to your task!

As another example, if you’re a parent trying to convince your kids to eat their greens, don’t ask if they want vegetables. Instead, ask if they would rather have one scoop or two scoops of veggies, or something similar.

By framing your questions as choices this way, you’re putting it into the minds of the listeners that they get to pick what they do. As such, they’ll be happier with having to do something unpleasant and have more positive thinking about doing it!

Conflict is a part of life, especially when you spend any time at all around other people. You’re sure to butt heads now and then. But if you want to avoid potential conflict, especially in the workplace, you can head it off with this neat psychological trick.

If you’re attending a meeting or some kind of gathering that includes the person you are concerned about, and you’re worried they might get aggressive or argue with you, pick a seat right next to them.

Yes, this seems counter-productive, but it works! It’s easier for someone to be angry or harbor dislike towards someone who is sitting further away from them. When you sit right next to the person who might start a conflict with you, they might find it too awkward to do so. They might not even feel the same anger anymore, either.

It’s also better if you are able to turn your body towards the person, so they have to face you. Then, make small talk or start a conversation before the meeting officially begins. This personal touch will prevent the person from starting a fight, and inspire positive thinking of you.

7.    Get information through silence

We all know people who don’t reveal as much as we’d like them to. Maybe they have difficulty opening up. Perhaps they tend to withhold information. Maybe they are worried about coming across negatively. Or maybe they just don’t like giving out simple information.

Regardless of the reason behind the lack of divulged information, there’s a way around it. When speaking to this person, ask the question you want to ask. If they do not answer it to your satisfaction, don’t move on, and don’t try to ask again.

Instead, say completely silent. Keep eye contact with them and stay quiet. After a few seconds, the person will feel compelled to elaborate, as it seems like you are waiting on or expecting more information.

This tension can also be uncomfortable, so the person might feel annoyed and moved to speak because of it. It’s not always the best option, but for cracking open those serious secrets, this is a psychological trick that has positive results.

8.    Psychological tricks to be remembered

Trying to stand out from the crowd? Going for an audition or interview with scores of other people? Aiming to be as memorable as possible? The trick is to make sure you either go first or last!

Of course, it’s not always possible to make arrangements to be first or last for something. But if you can, try to also make a positive impact, and you’re sure to be remembered more clearly than everyone else! 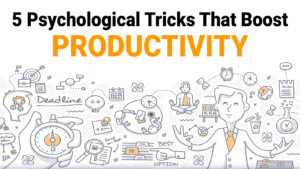 By the way, this also goes for dates. If you want the other person to really remember you, pick either the start or end of the day. In other words, skip the lunch dates! You can also try to set forth a strong impression during the start of the date, and right at the end.

If you’re trying to sell a story or idea to others and want them to agree with you, there’s an easy psychological trick that really works. All it involves is a little nodding.

Nodding is a very powerful action. Aside from convincing others to agree with you, studies have shown it can even convince your own mind if you’re nodding while someone talks! This is another reason why nodding works in persuading others. Humans tend to mirror each other, so if someone mirrors your nods, they may convince themselves that they agree with you!

People say that parting a crowd is all about confidence. That’s true to some degree – but in extremely crowded situations, people bustling back and forth aren’t always going to pay attention to how confident you look!

So if you’re trying to make your way through a crowd in a place packed like sardines, use this trick. Walk with purpose by avoiding eye contact with everyone else. Instead of looking at them, keep your eyes firmly rooted in the place you want to get to, or the direction you’re going.

This works because people often subconsciously check the eyes of those around them to determine which direction they are going. This is how people are able to naturally avoid collisions most of the time.