Last week, the leading infectious disease expert in the U.S., Dr. Anthony Fauci, called for all wet markets around the globe to shut down. Experts believe the virus outbreak started in the wet animal markets in Wuhan. Thus, they urge countries around the globe to close these unsanitary shopping places.

Dr. Fauci, director of the National Institute of Allergy and Infectious Diseases, urged the international health community to close down wet markets globally. He added that the pandemic “directly results” from these markets, which can quickly become breeding grounds for viruses.

“I think we should shut down those things right away…It boggles my mind how when we have so many diseases that emanate out of that unusual human-animal interface, that we don’t just shut it down…I don’t know what else has to happen to get us to appreciate that.”

Dr. Fauci, and lawmakers and health officials around the world, encouraged cities like Beijing to shut down their wet markets. Here, vendors sell seafood, bats, livestock, and other animals in cramped, open-air environments. And this is where zoonotic viral diseases can quickly spread. Experts believe that the virus originated in one of these markets in Wuhan, in the central Chinese province of Hubei.

Fauci says he encourages countries that don’t have wet markets to pressure others to shut down their marketplaces to avoid deadly viruses.

“I think there are certain countries in which this is very commonplace,” he said. “I would like to see the rest of the world lean with a lot of pressure on those countries that have that because what we’re going through right now is a direct result of that.” 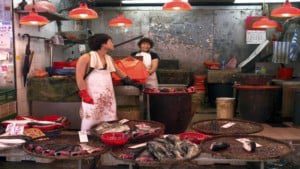 Others share Fauci’s views, including the Republican senator Lindsey Graham. He sent a letter to Beijing’s ambassador to the U.S., calling for the immediate closure of wet markets. He stated the closings will help to keep the world healthy and safe. China has since reopened these markets. Fauci “emphatically stated this was a crazy decision by China which puts the world’s health at risk.”

Fox News’ Tucker Carlson also spoke out about the reopening of the wet markets in Beijing and other places in China. Though no officials have been allowed into China to investigate the origins of the virus, Carlson said, “we have known for more than a decade that wet markets are a disease time bomb.”

However, shutting down the wet markets worldwide might not be enough. That measure may not guarantee that zoonotic diseases will cease to exist. As long as we have unethical and unsanitary practices at slaughterhouses, the risk of infection remains.

The swine flu, originating in pigs and H5N1, which comes from poultry, originated in slaughterhouses.