Any environmentally-conscious person knows that raising animals for meat has a significant impact on environmental health. You’ve probably also heard about the benefits of switching to a plant-based diet or the rise of lab-grown meat.

However, another possible alternative has arisen: crickets. Some scientists have hailed crickets as an environmentally-friendly protein option. You can already buy cricket flour, cricket powder, and ready-made snacks containing insect protein from a variety of health-food vendors. And crickets are cheap to raise and require very few resources. Therefore, cricket meat offers a way to combat world hunger while also helping the environment.

How Do You Eat Crickets?

If you’re just hearing about the use of cricket meat, you might be confused. How does someone eat a cricket? With more research linking traditional meat products (and mainly processed meat) to cancer and other health problems, you might be curious about adding cricket powder to your diet.

The truth is that eating insects may seem like a strange thing in many Western cultures. However, many other cultures embraced consuming insects for centuries. In Asia, Africa, South America, and even parts of Europe, crickets, beetles, caterpillars, and other insects are an essential component of many people’s diets. Bugs are prepared differently depending on the culture, but they are often roasted and eaten whole.

Of course, if you could only get protein from eating whole insects, most people would shun the idea. As insect protein grows in popularity, the ways you can eat cricket are steadily expanding.

This reach is a good thing. Indeed, it might convince those who were previously on the fence about insect meats to give insect-protein foods a try. But before we delve into why cricket meat might be the answer to world hunger, let’s look at a few of the different ways you can eat crickets.

Most Western people won’t want to try this option. As mentioned, eating bugs seems like a foreign concept. However, you can roast and season insects to make them more appealing.

Furthermore, some companies even sell freeze-dried, seasoned crickets as a high-protein, crunchy alternative to beef jerky. This snack is an option for the adventurous eater. Admittedly, it likely isn’t something that will catch on in the West anytime soon.

Or In Pre-Made Products

While cricket products are still a novel concept, a few companies have begun making cookies, crackers, chips, and even energy bars from cricket powder. If you aren’t sure if you’ll like the taste of cricket, these products offer a way to sample cricket products before you spend money on something like cricket powder. Granted, eating high-protein snack food is much different than cutting into a steak, but it still offers a sustainable way to incorporate complete animal protein into your everyday diet.

Or In Flour or Powder

If you want to add some more healthy protein to dishes you already make, cricket flour can be bought and used to create a variety of different food items. Alternatively, cricket protein powder offers a sustainable alternative to whey protein.

You can consume it in protein shakes or some types of baking, just like whey protein powder can be added to pancakes and other food items. As an added benefit, cricket protein contains omega-3 fatty acids, whereas whey protein does not.

How Do They Stack Up Nutritionally?

Cricket protein, like most types of meat, is a complete protein, meaning it includes all essential amino acids. With this in mind, some researchers have set out to compare insect proteins to more traditional meat sources.

A study published in the European Journal of Clinical Nutrition in 2015 investigated the widely-held belief that crickets were nutritionally superior to commonly-eaten meats like beef, pork, and chicken. Researchers used two different nutrient profiling systems, and they noted that no type of insect meat was statistically less healthy than traditional meat. However, no kind of insect meat had a significant nutritional advantage.

Mostly, while some people may have been disappointed to learn that insect meat has no real advantages over beef, chicken, or pork, this study found insect meat to be so similar that it was a viable alternative.

Plus, all the environmental benefits that cricket farming brings are enough to make researchers and entrepreneurs explore it further.

This nutritional research is also essential if you’re someone who wants to avoid consuming beef, pork, or chicken due to the objectionable treatment of animals. Crickets offer a way to quickly get enough dietary protein while avoiding supporting the traditional meat industry. 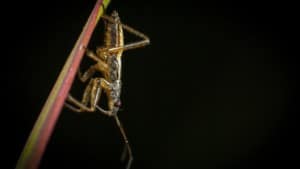 Aside from the benefits that harvesting insects for meat will have on the environment, cricket flour has a distinct advantage for those on a gluten-free diet. Cricket flour is similar in consistency to regular flour, and it’s bland, slightly nutty taste makes it a great choice to use while baking. It’s much higher in protein than wheat flour, so you may want to cut it with another type of gluten-free flour before baking. This addition will help improve the texture of anything you bake.

How Can Crickets End World Hunger?

Recent research into crickets as a food source has suggested that by 2050, world food production would need to approximately double. And with Western agriculture’s harmful impact on the environment, scientists have explored several alternative protein sources. The most successful traditional meat alternative thus far has been insect meat.

We already know that plant-based diets have less of a harmful impact than meals that include meat. But convincing everyone on earth to adopt a vegetarian or vegan diet isn’t feasible. Crickets offer a sustainable way to get animal protein in the diet, but they don’t accelerate global warming and environmental destruction in the same way that animal agriculture does.

Even if the use of cricket powder and other forms of cricket protein don’t wholly replace animal agriculture, also removing some of the demand for meat will make a difference in environmental health and agricultural sustainability.