Vaping has only grown in popularity over the years. You’ll rarely be able to go anywhere without seeing someone puffing away at their little vape device. It is regularly touted as a “safe” and “healthy” form of smoking.

But surely inhaling all that smoke can’t be good for you, right? As it turns out, science definitely thinks so, and vaping may not be as safe as many people seem to believe. In fact, it can have somewhat severe long-term effects on your health!

Vaping is the act of “smoking” through the use of e-cigarettes. They typically consist of a kind of liquid known as e-liquid, which is used to create the flavor of the cigarette. These cartridges of liquid can then be refilled or disposed of and replaced, depending on the type.

E-cigarettes are powered through the use of a rechargeable battery which, when turned on, activates a heating system within the product that turns the liquid inside it into vapor. A user will then inhale that “smoke” through a mouthpiece at the top.

E-cigarettes come in countless different forms. Some mimic the look of the tobacco products they are based on, like cigars and cigarettes. Others look less conspicuous, appearing as pens or even thumb drives. They go by many other names, including:

The Food and Drug Administration (FDA) officially classifies e-cigarettes as tobacco products. However, it should be noted that there is no tobacco content within any vape system – hence its attractiveness to the population.

In fact, vaping has gained millions of fans globally since its inception back in the year 2004, where it first popped up in China. Now, years later, countless people are using them – around 3.2% of American adults in the year 2016.

It seems like a small number, but vapes are also increasingly popular among teenagers and high school students. In fact, between the years 2011 and 2015, the usage of juuls among students in high school skyrocketed by 900%. The number of youths – who go to middle or high school – who have tried vape pens numbered two million in the year 2016 alone.

While many adults vape in order to overcome dangerous smoking addictions, many of the younger adults up to the age of 24 have never smoked before trying out an e-cigarette – around 40% of them, to be exact.

The act of vaping not to aid addiction recovery but just for the sake of it is becoming increasingly worrisome as science reveals negative links between health and vaping.

2.    Understanding E-Liquid Vapor and Its Dangers

When you think of the word “vapor,” it’s easy to brush it off, as it sounds like water. But this is far from the case – and it is this vapor that “smokers” are inhaling whenever they use an e-cigarette.

Here are some of the components found within e-liquid that are less than positive for the body: (1)

You may know nicotine as the substance found in cigarettes that makes them addictive. The content may be a little lower, but it is still easy to get hooked. This means that vaping can be just as addictive as smoking – and nicotine is especially harmful to the mental development of teenagers.

While this allows vapes to be great for those looking for a safer alternative to their smoking addiction, it also means that people who have never smoked before can wind up addicted to vaping. So if you’ve never smoked but are curious about vapes, this is your warning not to start.

In addition to that, if you’re looking to stop smoking through the use of vapes, there is a much lower chance of you kicking the smoking habit altogether. Those who have never smoked cigarettes before are also more likely to start if they begin vaping.

Volatile organic compounds, known also as VOCs, are responsible for a lot of health issues. They irritate your nose, eyes, and throat, and they put you at risk of nervous system damage. It can also lead to kidney disease, liver disease, and side effects like nausea and headaches.

In order for the vapor to appear very smog-like and thick, special chemicals have to be added to e-liquid. (Just compare the drama of a vape pen’s fog to the much thinner smoke that comes out of a cigarette.)

To create this effect, e-liquid contains either vegetable glycerin or propylene glycol – or, in some cases, both! These components can both cause irritation to your airways, including your lungs, leading to coughing and possible infection.

This preservative is often found in certain e-cig brands, including the famous JUUL brand. Benzoic acid may work well in preserving a product, but it also has links to a variety of problematic health issues, such as hyperactivity and asthma. You may also wind up with skin and eye irritation, nausea and vomiting, throat problems, and abdominal pain.

Most people already know how dangerous inhaling formaldehyde can be. It isn’t in e-liquids, to begin with, but when a vape pen becomes overheated, it can release this substance.

This can also happen when insufficient e-liquid remains, causing a “dry puff.” Formaldehyde is known to increase the risk of cancer.

According to a recent study, heavy metals were found in certain vapors from e-liquids in toxic amounts. Although not a majority, this indicates there is a good chance that you will come into contact with e-juice that contains too many heavy metals if you are a heavy vaper.

Heavy metals in toxic amounts are linked to liver disease and also to lung cancer, with both issues arising when you inhale them.

Lots of juuls contain interesting flavors that make them more palatable to users. This is what makes them so popular, especially among the younger crowd. Unfortunately, these flavor chemicals are not regulated, and some can be significantly toxic.

One such flavor is the type that contains diacetyl, which has been proven to be linked to bronchiolitis obliterans – a type of lung disease. Diacetyl is most commonly found in popcorn and butter-flavored juuls.

There are also other flavors that are dangerous, so don’t just avoid popcorn tastes while looking to the others with positive thinking! Fruit-flavored e-cigarettes tend to have high acrylonitrile content. Acrylonitrile is a known carcinogen. (2)

Cinnamon flavored products are also dangerous thanks to their cinnamaldehyde content. The same goes for honey flavors, known as pentanedione, and vanilla flavors, known as O-vanillin. All of these flavoring chemicals can negatively affect white blood cells.

But that’s not all. Menthol, strawberry, and coffee juuls are also bad for you because they are significantly dangerous to the cells of your lungs, according to research.

There is a possibility that, in the future, the FDA will begin to regulate the types of chemicals used in e-cigarettes. For now, though, there is nothing preventing manufacturers from using chemicals that can be harmful in the long term – and many do not disclose the full list of chemicals that they use.

To some degree, these findings have been taken out of context and used to spread frightening misinformation. It is crucial that these misunderstandings are cleared up in order to avoid the further spread of incorrect, non-scientifically proven facts.

A lot of the information currently spreading involves lung cancer, but studies have explicitly discovered that vaping doesn’t actually lead to increased lung cancer risk. In fact, most vapers use it as a method to help them quit smoking – a method that has had positive effects and been effective for many. (3)

In addition, the most famously cited study that links cancer to vaping tested primarily on mice, and they used an extremely high concentration of the e-liquid components – a concentration that you would never encounter if you are actually vaping.

With that being said, this isn’t to say that vaping cannot cause cancer at all. It is a relatively new phenomenon, after all, and it is impossible to see its effects until the young population using it ages. As such, only time will tell how dangerous vaping can be.

Vaping as an alternative to smoking

Clearly, vaping isn’t exactly a healthy habit due to all the chemicals it holds. It can definitely cause damage to non-smokers who take up the habit. However, it has proven a good option for smokers looking to kick their tobacco habit. This is because:

Once again, we’d like to emphasize that this information applies specifically to those who are already smoking cigarettes. If you have never smoked before, vaping increases your risk of disease because of the addictive nicotine and the extra chemicals. However, this risk is low compared to real cigarettes. 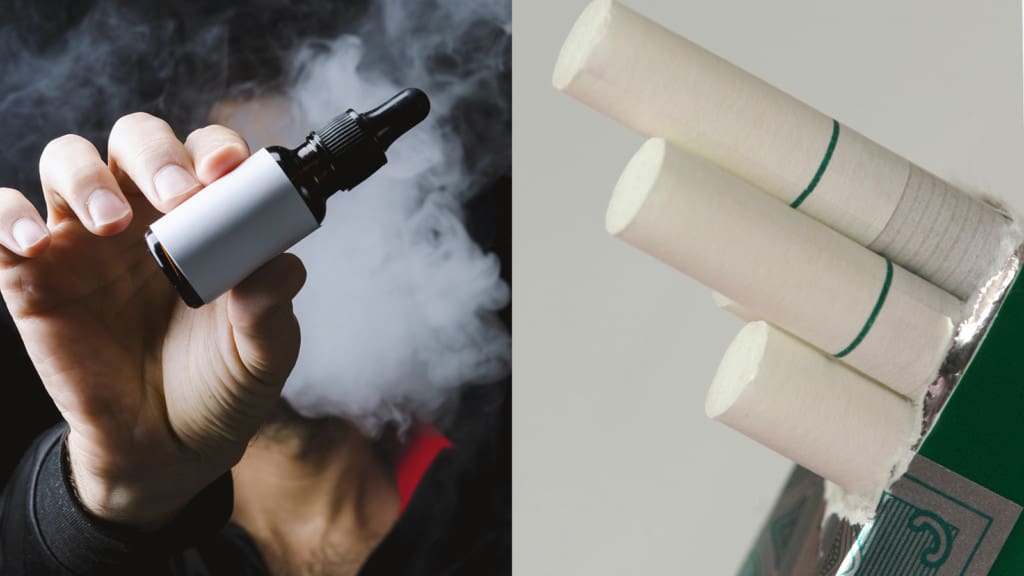 Final Thoughts On How Vaping Can Cause Brain And Lung Damage

Is vaping dangerous? Current research isn’t enough to tell us for certain, but we do know one thing – it is less dangerous than cigarettes. Unfortunately, that isn’t a very uplifting idea, to begin with.

Due to the beginnings of research surrounding juuls in all their forms, we are beginning to see that there is harm that may come from regularly vaping, especially if you have never smoked before. The chemicals contained within many e-liquid brands are definitely no joke, and many are noticeably toxic.

Is there a chance that vaping products will be FDA-regulated in the future, allowing for “safer” vapes? Possibly. But until then, if you’re not a smoker, it’s best to steer clear of this hip new trend. It may be a lesser evil as far as vices go, but it is still a vice, and a vape addiction is an addiction nonetheless – no matter how much you spin it with positive thinking.