Human beings are constantly searching for the answer to all of their weight and health problems. The “this diet can fix it all mentality” has been utilized in society for decades and has been consistently fortified with faulty supplements, dangerous fads, and weekly weigh ins that leave dieters less than satisfied. Because the majority of all diet trends tend to fail, people have recently decided to take up a more natural approach in how they eat overall–a change toward a vegan diet that has certainly stood the test of time.

Veganism is defined by an eating choice that opts to deny the consumption of any product derived from the cruelty of animals, as stated by The Vegan Society. While some often associate this style of eating with lifestyle choices and personal beliefs, others see it as a natural way of fueling their bodies that can be traced back nearly two thousand years. With a plethora of benefits to a person’s health resulting from the vegan diet, there is no surprise that such a common practice has become a hip fad itself.

When a person decides to start a diet, most would assume that their end goal is to lose weight. While the vegan diet surely aids in sustaining a fit stature, it is salient to note that the importance of transitioning eating habits circulates the need to improve the body’s health overall. From regulated blood pressure and heart health, to maintained blood sugars and appropriate vitamin levels, veganism ensures that the word “diet” is not something to be dreaded, but something that simply describes the way a person cares for themselves and reaps the benefits of doing so.

Opt Vegan: The Basic Foundation, The Why and How to Make the Transition

As previously mentioned, a vegan diet excludes all products that have resulted from the cruelty of animals. While most understand immediately that this means meat and poultry of any kind, others struggle with further common rules associated with the diet, including the avoidance of dairy, eggs, and products such as a gelatin and even honey. With a basic foundation and understanding of what to avoid as a vegan, converting to the lifestyle will be as simple as it is beneficial.

Of course, a multitude of nutrients are found in meat, poultry, and seafood, which is why some find difficulty in understanding the vegan diet benefits at all, but it is important to note the negative effects of animal products, too, including weight gain, an increase in the risk of heart disease, an elevated risk of food born illnesses, and that they can even make a person resistant to antibiotics, as concluded by The Collective- Evolution.Because so many cons are associated with the consumption of animal products, it seems as if the vegan diet is surely the most solid solution.

After determining the need to begin eating vegan, people often feel lost when it comes to cooking without ingredients once deemed staples in the kitchen, such as eggs, butter, and milk. Thankfully, a bounty of recipes and adjustments exist that ensure a person’s switch to veganism is as tasty as it is positive.

The Top Undeniable Health Benefits of a Vegan Diet

When a person consumes a diet rich in fresh vegetables, fruits, soy, nuts, and whole grains, their body reaps the benefits of increased nutrients and vitamins. Because all of these components come from the Earth uninterrupted and bombarded with antibiotics or chemicals, they are loaded with vitamins and nutrients, including:

Found in dark leafy greens, nuts, and seeds, magnesium aids in the absorption of calcium, which improves bone, hair, and skin health.

Important in stimulating the kidneys to rid the body of toxins due to its ability to balance water and acid in the body, potassium is found to also assist the body in warding of harmful, cancer-causing free radicals.

Part of the B vitamins, folate is essential in generating red blood cells as well as repairing damaged cells within the body.

Of course, this vitamin boosts the immune system and helps the body heal from cuts, scrapes, and bruises. It assists in the production of collagen for healthy skin and sustains bone, gums, and teeth health as well.

2. The Body’s Ability to Fight Off Harmful Diseases Enhances

The vegan diet health benefits do not stop with elevated nutrient levels in the body and even go as far to decrease the likelihood that a person will be diagnosed with serious diseases, such as:

Those Associated with the Cardiovascular System

In 2014, the World Health Organisation stated that eighty to ninety percent of heart attacks result from a person’s lifestyle choices and not necessarily genetics. Because of this unsettling statistic, the vegan diet grew further in popularity because, after all, eliminating dairy and the high fat content found in meats drastically reduced high blood pressure, heart disease, and strokes.

Because most that contract this disease are overweight, those who switch to veganism either rid themselves of the ailment entirely or better maintain it.

Dean Ornish, MD, led a study in which ninety three men who positively tested for prostate cancer or cancer-causing components were studied. Those who switched to veganism drastically improved in any negative areas of health, which lead to a breakthrough for preventing the cancer entirely.

While evidence does not prove that veganism cures nor prevents breast cancer in women entirely, studies have shown that women who follow a plant-based diet are better able to fight off cancerous tumors in the body, according to the Harvard T.H. Chan School of Public Health.

4.The Quality of Physicality Improves

Vegan diet health benefits in relation to a person’s physical appearance undoubtedly surround the fact that such a way of life is calorie-friendly. Because of this, a person’s body mass index (BMI) lowers, leading to weight loss, lean statures, and the ability to be more physically fit due to an increase of energy.

5. The Good, the Bad, and the Downright Ugly

The expression, “You are what you eat” was not ill conceived. A diet high in unhealthy fats, additives, and chemicals results in some unsightly issues, including body odor and bad breath. People who eat a lot of red meat and dairy often have to combat body odor by applying strong deodorants, but those who eliminate these groups from their diets find that they smell better naturally. The same theory can be said for bad breath and overall oral health.

Migraines and allergies are issues that society has made fairly common in order to push over the counter medications. In all reality, however, allergies and migraines are often triggered by unnatural lifestyles and compromised immune systems. In a study conducted in Washington DC, migraine sufferers placed on a vegan diet reported a significant reduction in their overall migraine pain. The vegan diet health benefits go as far to abate other pains in the body naturally, like cramps from menstruation as well.

7. Reduces the Negative Effects of “Too Much”

There is such thing as getting too much nutrients and vitamins, and the side effects of such can be devastating. Studies show that those who eat red meat and poultry often are, in fact, receiving too much protein that the body cannot quickly process. Too much protein in the body can result in weight gain, kidney disease and failure, and the loss of calcium which causes osteoporosis. Further vegan diet health benefits support the idea of the body processing reasonable amounts of nutrients naturally and more effectively. 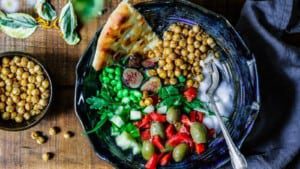 8. Food Sensitivities Become a Thing of the Past

Too often, humans are forced to believe that their bodies are failing them when they are unable to eat certain foods when in all reality, the body’s response to certain foods is natural and its way of saying “Stop it!” About sixty five percent of the population is lactose intolerant, a fact that is often demonized because society wants people to believe that milk is good for them. However, the human body is not meant to process cow’s milk, especially after a certain age, further validating the importance of veganism.

9. Veganism Benefits the Environment, Too!

While the vegan diet health benefits are undeniable, it is important to note that the environment reaps the riches of the lifestyle as well. Less resources are required to farm plants than to grow animals, reducing waste and the use of our natural resources. If the environment is healthy, you are, too.

10. Going Global: Veganism and Its Effect on the World

Perfectly good food is more easily available to animals factory raised for slaughter rather than those starving in underdeveloped nations. Switching to veganism results in less animals needing to be factory farmed, thus leaving edible resources to those who need it more.

Conclusion: The Growing Advantages of Veganism

In sum, veganism is not only a lifestyle choice but perhaps the most natural way to live. Life’s essential nutrients rarely come from animal products alone and that reality has resulted in a healthier society as well as a planet sure to reap the benefits of conscientious people. From the reduction of contracting serious diseases to understanding the human body and its responses better, veganism is an ancient way of life that has fueled humans and the planet for thousands of years.

Related Items vegan diet vegan diet benefits vegan diet health benefits what vegan diet does to your body
Power of Positivity uses cookies to give you the most relevant experience. For more information see our Privacy Policy.
Continue
Manage consent