Over the years, there have been a variety of diets that have overpromised and undelivered, placing those seeking to lose unwanted pounds back at square one. The ketogenic diet, however, is the antithesis of a fad diet; in fact, it has been proven to help countless people lose weight fast, but is it safe, especially for those who have been diagnosed with type 1 or type 2 diabetes?

In this article, we will address whether or not a ketogenic diet is advisable for those with this disease and also take a look at the results from several independent studies. Hopefully, by the conclusion of this article, you will have enough information to be able to decide whether or not this diet is right for you.

What is the keto diet?

For those who are unfamiliar with the keto diet, it is a diet that is predicated on a dramatic reduction in carbohydrates while keeping fats and proteins relatively high. Needless to say, health concerns have always been linked to keto diets, but lately, they have taken center stage as those with diabetes are turning to this diet to lose weight.

The difference between type 1 and type 2 diabetes

Now that we have a cursory understanding of the ketogenic diet, let’s turn our attention towards diabetes. Although many people have heard of type 1 and type 2 diabetes, it doesn’t mean they are familiar with the differences between the two chronic diseases, and there are a few key differences. Those with type 1 diabetes are unable to produce insulin while those with type 2 diabetes may find that their body doesn’t respond to the insulin that is being produced.

The keto diet and type 2 diabetes

If you have type 2 diabetes, and you’re looking to lose weight, you’ll be pleased to know that a ketogenic diet is not only safe, but effective. In a study that was overseen by Dr. Laura Saslow, an assistant professor of Behavior and Biological Sciences at the University of Michigan School of Nursing, those with type 2 diabetes that followed a ketogenic diet experienced an appreciable amount of weight loss and also enjoyed a 6.5 percent reduction in their hemoglobin A1c.

So what does this mean in layman’s terms? Well, it means that those who followed a low carb, high protein, high-fat diet not only lost weight, but also managed to reverse their type 2 diabetes. It should be noted that the study participants were limited to a diet consisting of only lean meats and vegetables. It should also be noted that the study placed a greater emphasis on type 2 diabetes, as there is a stronger correlation between this variant of the disease and excess weight. Type 1 diabetes, although worthy of conversation, is a disease that you are born with and is not as easily influenced by one’s weight.

The study consisted of 25 participants with 13 following the “plate method,” a diet consisting of grains, fruits, non-starchy vegetables, and low-fat dairy while the remaining 12 participants followed a keto diet. Those following the “plate method” filled half of their plate with broccoli, carrots, peppers, and other non-starchy vegetables. They then filled a quarter of the plate with whole grains, before filling the remainder of the plate with their choice of leans meats.

As far as those following the ketogenic diet, their instructions were much simpler; they were instructed to limit their non-fiber carbs to 50 grams. It should be noted that all of the study participants were in their 50s and were all diagnosed with type 2 diabetes; additionally, they were each taking metformin, a medication designed to improve the body’s response to insulin, which is naturally produced in the body. Lastly, all participants were limited to 1,700 calories per day.

At the end of the study, which lasted for 32 weeks, the ketogenic diet proved to be more effective than the “plate method.” The study revealed that those following the keto diet plan lowered their respective HbA1c to 6.5 percent, and this is in addition to losing an average of 28 pounds. With regard to those on the “plate method” diet, none of the participants lowered their HbA1c low enough to reverse diabetes, and with regard to weight loss, study participants lost an average of 6.6 pounds.

Why did participants on the keto diet do so much better?

The 1,700 calorie cap on the ketogenic diet places the body in a state of ketosis, a normal metabolic process whereby the body draws energy from fat stores as opposed to carbohydrates. It should also be noted that carbs did not make up a very large percentage of the participants’ total caloric intake, and this reduction in carbs forced the body to turn to fat as an energy source.

The keto diet and type 1 diabetes

A low-carb diet did not produce the same favorable results detailed in the study involving those with type 2 diabetes; in fact, the low-carb intake seemed to have an adverse effect on many participants. They were unable to lower their HbA1c any lower than 7.2 percent. Also, the low-carb diet had no effect on participants’ lipid profiles, as those remained unchanged. Obviously, more studies will need to be conducted to better assess the impact of a low-carb diet on those with type 1 diabetes, but as it stands, this may not be a viable option for those who have type 1 diabetes and are looking to lose weight.

What you should know before starting the keto diet

On the surface, the findings detailed in these studies are compelling; however, further research may be needed to confirm the long-term effects of a ketogenic diet. The studies that have been conducted so far have not completely addressed weight loss relative to blood sugar, nor have they taken into consideration other components that may have contributed to a patient’s weight loss, says Dr. Michael Gonzalez-Campoy, medical director and CEO of the Minnesota Center for Obesity, Metabolism, and Endocrinology. Dr. Gonzalez-Campoy goes on to say that larger and more randomized controlled trials will be needed before a definitive conclusion can be made regarding the diet’s efficacy.

Is a ketogenic diet right for you?

Deciding on whether or not to follow a ketogenic diet plan invariably comes down to the type of diabetes you have –  type 1 or type 2. Those with type 1 diabetes are cautioned to avoid this diet as the buildup of acids and ketones in the body may place undue stress on the kidneys. For those with type 2 diabetes, this diet may be worth considering, if you don’t mind a significant calorie restriction. 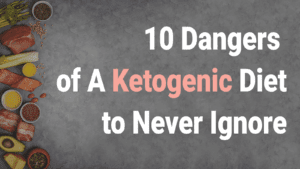 Again, it must be stressed that these studies were not large enough or randomized to point where a definitive conclusion has been made regarding efficacy. The data that was made available from these studies may be encouraging, but in the case of those with type 1 diabetes, this diet should be avoided. If you are considering starting a ketogenic diet, you’re encouraged to speak with your doctor who can assess your overall health and help you decide if a keto diet is right for you.