The thyroid is a butterfly-shaped endocrine gland in the neck. It produces two hormones, triiodothyronine (T3) and thyroxine (T4), that regulate the body’s metabolism. Often, people attribute the first signs of thyroid cancer to other conditions.

Thus any thyroid disease can cause severe illnesses.

What Is Thyroid Cancer?

Follicular cancer is the second-most common type, and it affects about ten percent of patients with cancer of the thyroid. It is more common in places where the local diet is typically deficient in iodine.

Medullary thyroid cancer (MTC) develops in the thyroid gland’s C cells. It affects about four percent of patients. MTC can be sporadic or familial; the latter runs in families and can affect children. Sporadic MTC affects about 80 percent of MTC patients. MTC is more difficult to detect and treat than some of the other types. 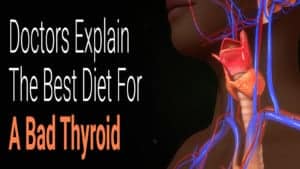 1. Swelling of the Neck

Swelling of the neck is one of the more noticeable symptoms, but benign disorders like thyroid nodules can also cause it. Anybody with this symptom should see their doctor, who will order the appropriate tests. They will often request a tissue biopsy to make the diagnosis. If the doctor does find cancer, they will then order imaging tests like ultrasound or MRI to determine if cancer has spread to other parts of the body. They may also order laboratory tests to see how well the thyroid is working and monitor any treatments.

A common symptom is a painless lump near the base of the front of the neck. However, bumps in the neck are common and are often caused by benign conditions like goiter (enlargement of the thyroid). In fact, about 95 percent of neck lumps are benign.

Other risk factors that increase the risk of having thyroid cancer include the following:

Dysphagia, or difficulty swallowing, becomes increasingly common in people over 50. It can cause patients to feel as if they have something stuck in their neck or chest. In some cases, the patient has trouble starting to swallow.

A cancer patient’s thyroid often becomes enlarged. In the process, it puts pressure on the throat and thus makes it hard for the patient to swallow. Some of the treatments for cancer may also cause dysphagia.

As mentioned earlier, hyperthyroidism is a condition in which the thyroid produces too much hormone. It thus creates the patient’s metabolism to become abnormally fast, and the patient can develop symptoms like the following:

Some studies suggest that hyperthyroidism is a risk factor for cancer as well as a symptom. For example, the science journal “Clinical Endocrinology” published a 2019 overview of studies that examined a total of 2582 patients with Grave’s disease, an autoimmune disorder that is the most common cause of hyperthyroidism in the US. The researchers found that the different studies reported a broad range of 0.15 percent to 15 percent of Grave’s patients being diagnosed with cancer. On average, about 11.5 percent of patients with Grave’s disease developed cancer. The researchers noted that patients with nodules or lumps, as well as Grave’s disease, were more likely to develop cancer of the thyroid.

5. Persistent Changes in the Voice

While nodules on the thyroid are usually benign, lasting changes in the patient’s voice can indicate that the nodule is malignant.

The thyroid sits under the larynx, which is also known as the “voice box.” The laryngeal nerves, which split off from the vagus nerves, are attached to the base of the larynx. They regulate the larynx’s function by sending electrical impulses through it.

Growths on the thyroid can put pressure on the larynx or the laryngeal nerve. That pressure will eventually cause changes in the voice, such as persistent hoarseness. Thus, a patient who develops a raspy voice that shows no signs of getting better should have their thyroid checked for abnormal growths.

Difficulty breathing, which is more formally known as dyspnea, is another possible sign of cancer in the thyroid – and it can be a particularly worrying one. In many cases, the breathing difficulties are caused by a tumor that has grown large enough to block the airway partially.

Even more ominously, dyspnea can indicate that cancer has metastasized and reached the lungs. There, the abnormal cells multiply and impair the patient’s ability to breathe. Cancer cells in the lungs eventually cause a variety of complications, some of which are fatal. While thyroid cancer generally has a very high survivability rate, that isn’t true if the disease reaches the lungs. Cells that spread to the lungs are the most common cause of death in patients with cancer of the thyroid; nearly half of them die from this particular complication.

Irritation in the throat causes coughing, and it has many well-known and relatively benign causes, such as the common cold. It can also be a symptom of cancer of the thyroid, particularly if the patient does not have any upper respiratory infection, and they don’t stop coughing.

In cancer of the thyroid, the growth can eventually press against the trachea or windpipe, which is right behind the thyroid. It can thus irritate the trachea and its associated nerves and cause constant coughing.

A patient who has been diagnosed with cancer of the thyroid and has a persistent cough should undergo a CT scan. The imaging test can both determine if the tumor caused the cough and the extent of involvement with the neighboring nerves.

Since the thyroid helps regulate metabolism, damage to it affects the metabolism and thus causes changes in weight. As already mentioned, cancer of the thyroid can cause hyperthyroidism, which is associated with weight loss.