A migraine headache is a complex neurological condition that affects about 38 million people in the U.S. alone. Migraine headaches can be debilitating. They cause symptoms like nausea and vomiting, pulsating and throbbing pain, and sensitivity to light and sound. But have you ever wondered what causes migraines?

Researchers from the American Headache Society learned in a recent study that what people commonly assume causes migraines might not, in fact, be the triggers. The researchers highlighted some food (or food ingredient) triggers that might not be the reason for your migraines:

Here Are 3 Things That Don’t Cause Migraine Headaches

“By taking the time to focus on our mental and emotional well-being, we can minimize our triggers and reduce the likelihood of a recurrence.” – Sarah Hackley

If you’ve been searching for what causes migraines, you have probably thought of chocolates. Chocolate is a migraine trigger, according to common perception. Then again, common perception is not always accurate. In fact, studies regarding the effects of chocolates on migraines haven’t exactly established a concrete link.

Experts from the American Headache Society looked into 306 individuals with alleged migraine reactions to chocolates. Surprisingly, they learned in an N=1 analysis that the attack risk is only four compared to a decreased risk of 12. In other words, more people in the study reduced their migraine triggers by eating chocolates.

A study in the International Headache Society journal surveyed 63 women who regularly suffered from migraines. They indicated that chocolate was not likely to cause a migraine as much as stress, alcohol drinking, an improper diet, and lack of sleep. Researchers stated that there was never any scientific basis for avoiding chocolates or cocoa.

But why are chocolates commonly blamed for migraines?

According to experts, people suffering from this condition usually crave sweets before an attack. They have likely consumed chocolates to pump up their adrenal glands. They might need an energy boost to combat actual triggers, such as exhaustion, lack of sleep, or stress. Experts say that while there are no scientific links between a migraine headache and chocolates, it you should monitor your body’s responses to what you eat. Everyone is different, so take note of when you get migraine attacks and whether you ate chocolate before it happened.

If possible, jot down other foods you’ve had (aside from chocolates) to rule out other triggers. Remember that each person’s food sensitivity is unique, and your body may be responding to other ingredients.

Also, consider the context of your predicament. If you ate tons of chocolate and have not eaten a decent meal that day, you will likely feel ill. Also, if you’re prone to migraine attacks, then you’re likely going to feel worse.

Monosodium glutamate (MSG) is not what causes migraines. MSG is a flavor enhancer and an active ingredient in processed food, soy sauce, Asian dishes, and meat tenderizers. MSG is naturally fermented from corn sugar, starch, or molasses from sugar cane but just because something is naturally made doesn’t automatically mean it’s safe for the body.

Apparently, there is such a thing as Chinese restaurant syndrome, which highlights how people develop migraine headaches within 30 minutes of eating high-MSG Chinese food. Reports of adverse reactions from people who ate food with MSG crop us as early as 1968, yet no clear scientific evidence supports these claims.

In the American Headache Society study, 122 individuals said they had migraine triggers from eating food with high-MSG content. The experts stated that following an N=1 analysis, MSG’s actual high risk was about five, while its decreased risk was at two. The study authors said that this difference was not significant.

A separate 2017 study published in the Journal of Headache and Pain cited that there is no causal relationship to link migraines to MSG. The experts saw no significant difference in the triggers and migraine attacks of the MSG-filled food the study participants consumed, despite the researchers controlling the food’s MSG contents.

The experts also stated that previous human studies on MSG effects administered the additive in high doses, which led to gastrointestinal problems. Such a condition likely influenced migraine sufferers more. The study authors stated that conclusions tying MSG to migraines could be premature.

In recent times, some of the health problems associated with MSG have been debunked, as per Washington Post. The Food and Drug Administration (FDA) also cited that the ingredient is generally safe. 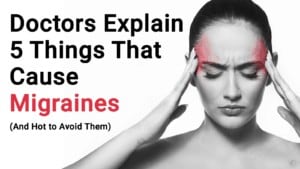 Nitrates are chemicals added to foods like bacon, cured ham, salami, and sausages to prolong their shelf life and prevent the growth of harmful bacteria. This ingredient also lends a salty flavor and pinkish color to processed food to make it palatable.

The American Headache Society tested 182 people in an N=1 analysis. They learned that the high risk of migraine attacks with nitrates intake was about four and the low risk was at two. As with the findings in the effects of MSG, experts mention these results have little significance.

In 2016, a separate study discovered that the gut bacteria in people with migraine attacks work differently. As a result, their body grows sensitive to certain foods; migraine headaches are a side effect of this sensitivity.

These studies highlight that there is not one specific “migraine” diet. We also have no concrete proof that avoiding certain food or food ingredients will help alleviate the condition. Some people might not even have these common food triggers and yet they still develop throbbing headaches regularly.

Experts suggest that along with studying your diet, you must keep your lifestyle habits in check. Also, try to identify the actual migraine triggers. By taking a proactive and positive approach to what you eat and what you do, you might slowly begin to control the condition, thus keeping it from recurring and affecting your daily activities. Remember to maintain positive thinking as one step to understanding the best choices for your health.