Kai, a golden retriever/lab mix therapy dog, lost a whopping 100 pounds in just a year. He now gets to live a fuller, happier life as a result of his huge weight loss transformation. At one point, his weight made it hard for him to even walk. But now, he can run and play like a normal dog.

His story began when his previous owners brought him to the vet last March and found out he weighed 173 pounds. The vet said they’d have to put him down. Instead, his owners took him to a local animal rescue. From there, his foster mom Pam adopted him, helping him lose the excess weight. She wanted him to enjoy life again. Kai’s vet monitored his weight loss closely, making sure he stayed healthy in the process. 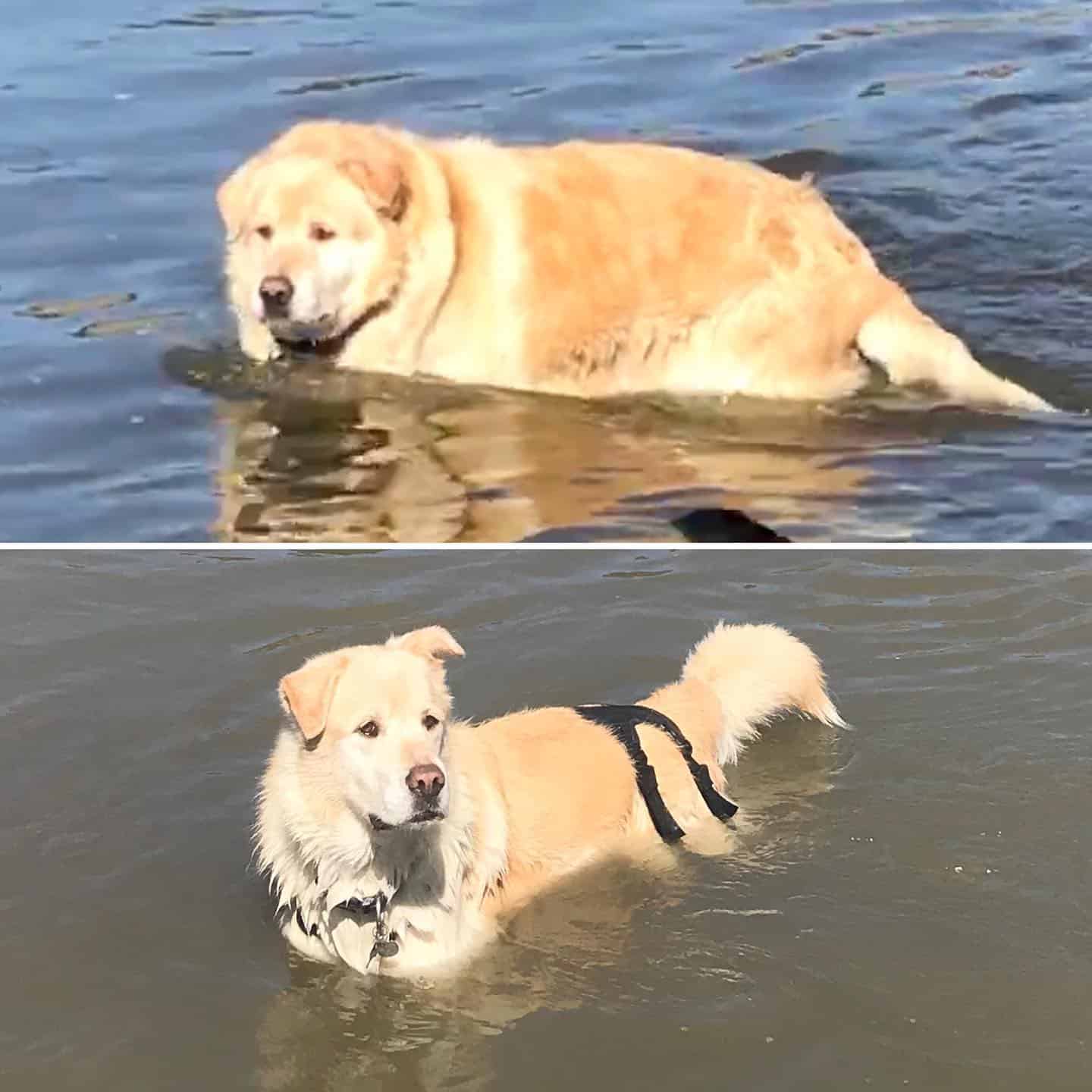 A new family for Kai

“When I first met him, I was just amazed that he could still be so kind and loving when he had to be in a lot of pain,” Pam said. She also said that Kai couldn’t do any normal things that most dogs did when he was overweight. “He couldn’t run, he couldn’t play at the park.”

Seeing that he needed help, Pam decided to foster him and help him lose 100 pounds. Once he lost all the weight, she said he could finally enjoy life and do normal dog activities again. It broke her heart to see him struggle so much when she first met him. She said that it took two or three people to lift him. Also, he could only walk 5 or 10 steps before he got too tired.

To lose the extra weight, they went on a lot of walks together, and Pam made sure to feed him a healthy diet. She also went to lakes and other places with water, so Kai would have some resistance training by walking through it.

After he lost the weight, Pam said she signed him up to become a certified therapy dog so he could do hospital visits. Aside from making people smile at the hospitals, he also enjoys going to the dog park. Other activities he loves include playing with his dog siblings and eating fruits such as bananas, strawberries, and blueberries. Kai truly lives his best life now after his dramatic weight loss transformation. 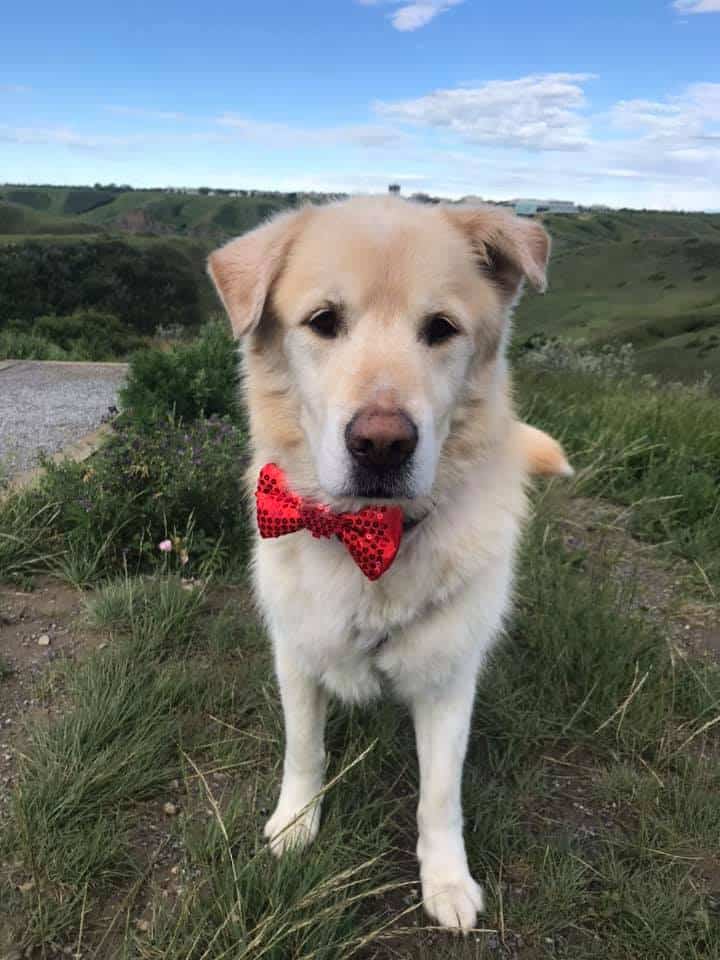 “Nothing makes him happier than dinner time when he knows he’s gonna be fed, and he loves to go on road trips,” Pam said.

Pam says that if you’ve ever thought about fostering or adopting, you should try it because it helps dogs find loving homes. “Fostering is a really great way – it’s like trying on a pair of shoes – and you decide whether that’s the perfect fit for you.”

While Pam initially just fostered Kai, he seemed to fit in wonderfully with her and her family, so she adopted him. Her decision to make him a part of her family transformed Kai’s life forever, both physically and emotionally.

“He is literally always happy, and I am just so grateful that his owners chose to surrender him instead of having him put down. I’m eternally grateful to have him as a part of our family.”

Kai seems to have the best mom ever, who takes him on beautiful hikes all over their home country of Canada. Here, they explored Elk Island National Park in Edmonton:

“Spent an amazing afternoon hiking and sightseeing at #elkislandnationalpark
We hiked Lakeview Trail (Astotin Lake), and then we did Moss Lake Trail. The weather was a little bit of everything- sun, rain, and even a little hail.

The Bison were out and so beautiful. Our hike to Mud Lake was cut short due to a herd- and since we’re in their home, mom said respect is key. If you look closely, you can see them in the trees. Some were really close to the road- so close up photos.” 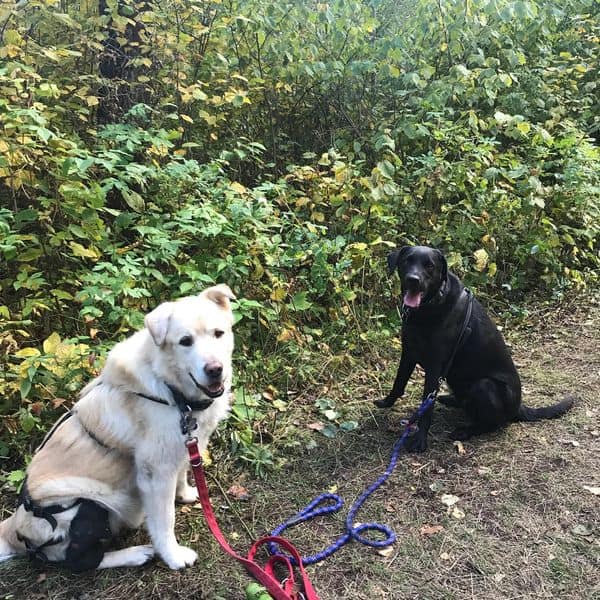 Kai gets a new friend.

A few months ago, Pam decided to foster another overweight dog named Woody. She wants to help him become his best self, too, just like she did with Kai!

“I’ve got some BIG news – everyone meet my new foster brother, Woody! Woody tips the scales at an unbelievable 209 lbs (95.2 kgs). I’m going to help him on his weight loss journey- I kinda know a thing or two about that.”

Pam says he should weigh around half that, but she will help him get there little by little. Will Woody also become a therapy dog?