Milton, a 7-month-old Corgi puppy, always gets his day started on the right note. He could definitely teach us a thing or two about the importance of a morning routine. Corgis are well-known for having big, interesting personalities, and Milton is no exception. His owner Maddie describes one of her favorite things about the adorable puppy below.

“One super unique thing that Milton does that I really love about him is his morning stretches. This started the first day that we brought Milton home, and as he was getting used to his crate training and his routine with us,” Maddie says. “Now, the first thing he does every morning when I let him out of his crate is run up to me and get into a big stretch, right before I get to hug him and pet him for the day.”

Just like humans, dogs also need a good stretch before they start their day! It helps loosen the joints and muscles and helps shake off the slumber. Especially for dogs kept in crates, they’ll want to stretch out when they wake up. 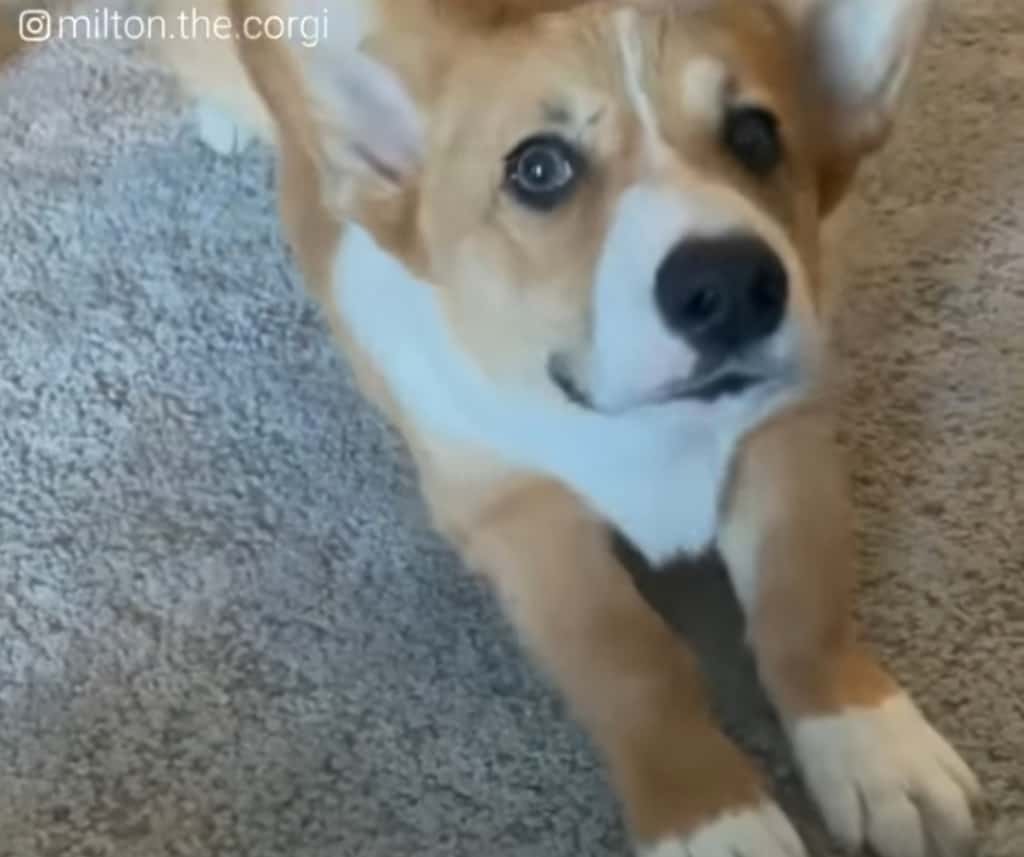 On her blog, Maddie says that crate training is important for dogs. It helps them learn that the crate is a positive place and also aids in potty training.

Basically, you get your puppy to feel comfortable with a crate by throwing treats inside. Then, close the door briefly and repeat the process, increasing the amount of time he’s left in the crate each time. You may also want to keep the crate in your bedroom and place a blanket over it. This makes the puppy feel safer and more comfortable.

Why crate training is important for Corgi puppies

As far as potty training, you’ll want to take a new puppy out every few hours, including at night. Then, throw a treat into his crate when he comes back to increase the positive association. Luckily, Maddie says that Milton never whined in his crate, so he’s a well-behaved pup!

During the day, she recommends crating your pup after playtime or when you’re not watching them. Also, when you eat meals, it’s important to keep your pup in a separate space. Why put the pup in a crate so often? Well, for one, it’s an important part of the potty training process.

Dogs don’t like to use the bathroom where they sleep. So, by putting them in a crate when they’re most likely to need a potty break (i.e., after playing and eating), it shows that you control when he goes outside. That way, he learns to associate going outside with potty breaks. Make sure to take dogs out every three or four hours, especially as puppies. Bottom line: crates help control the potty breaks, as well as offer dogs a safe space.

Before getting Milton, Maddie made sure to learn all she could about the Corgi breed. In addition to the crate training, she also researched potty training, sleep patterns, and a basic Corgi puppy shopping list. With all that information, she felt ready to adopt her favorite dog breed finally.

“So we brought Milton home on January 16, 2021. I particularly wanted a Corgi because of how goofy and smart they are. And seeing the Corgi community on social media, I think, was what really got me hooked. His personality was honestly evident the very first day we brought Milton home,” Maddie said.

The little Corgi with a huge personality

“He immediately started playing with his toys and walking around in the typical, funny Corgi way. By day three, he had even mastered the ‘sit,’ so we knew that Milton was something special. I think Milton’s big personality has been the biggest factor that pushed me to want to create social media accounts for him,” Maddie said.

“For example, Milton loves sleeping and playing with the toys on his back. I feel like multiple times during the day, I can look over and just see him lying on his back either passed out or, you know, playing with the toy, so that’s just one super fun thing that I get to feature on social media and show people.”

Corgis have a stereotype of being silly, fun-loving dogs, which makes them popular pets. Not to mention, they’re adorable, fluffy, and smart, so what’s not to love?! While Maddie had a few surprises with owning a puppy, she wouldn’t trade Milton for anything.

“The most rewarding thing about owning a pet and a dog, in particular, is seeing their personalities grow and develop. Getting Milton as a puppy, I had a special privilege in doing this because you’re really getting them from the very beginning when they’re just this little ball of fluff,” Maddie says, “and you’re seeing them grow honestly so quickly into these full-grown dogs with these unique personalities and fears and likes.”

Maddie also loves that Milton always knows how she feels. When she’s sad, for example, Milton can immediately sense that and runs over to comfort her.

Maddie’s advice for anyone who wants to adopt a pet:

“I would start by examining your lifestyle and figuring out if you can accommodate a pet, and more specifically, what sort of pet would fit your lifestyle and your needs. Having a pet is truly an unforgettable journey, and thank you for letting me share mine,” she says.

All dogs have their own unique personalities, including Milton the Corgi. For a tiny 7-month-old pup, he certainly makes his presence known and takes pride in his uniqueness. Every morning before Milton greets Maddie; he does a big stretch when he comes out of his crate. It’s adorable to watch, and it’s one of Maddie’s favorite things about him.

It’s always fun to watch your dog grow up and get to learn his little quirks and cute habits. What do you love most about your dog or pet? Let us know in the comments!