Measuring Vitamin D levels only became available about 15 years ago and until then there wasn’t much concern around its levels. Once the studies and testing began, it became apparent that this deficiency was a common concern among the general population.

One of the country’s leading researchers on vitamin D, Dr. Michael Holick, reports that at least 50% of people are at risk for vitamin D deficiency. His claim is further substantiated by The Center for Disease Control and Prevention (CDC) which states that 32% of people in the United States are vitamin D deficient. The CDC goes on to say that this estimate is probably low because the recommended levels are not sufficient to promote optimal health.

The obvious first choice in getting proper nutrients is through diet, but it can be difficult to get appropriate Vitamin D levels through diet alone. Here’s a visual example of great food sources that can help you get Vitamin D: 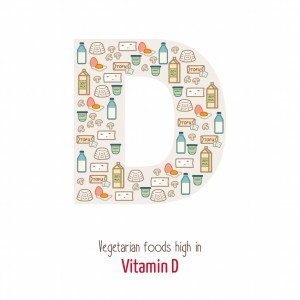 The good news is exposure to sunlight can make up the difference that your diet alone doesn’t provide.

It is important to note that sunscreen will prevent your skin from absorbing this nutrient from the sun and this is just one reason the Vitamin D deficiency rates are climbing.

A deficiency is often misdiagnosed because its symptoms can mimic other ailments. It is important to become aware of what may lead to a deficiency so you can ask the right questions of your wellness provider.

Here are 10 signs you may have a vitamin D deficiency.

Your body fat collects vitamin D, so your body can process it into its usable form. The more fat you carry, the more of this valuable nutrient you will need.

2. You have high muscle mass and low body fat.

Similar to being overweight, too little body fat hinders your body’s ability to collect the necessary amounts of vitamin D, this time because you don’t have an adequate body fat supply.

The pigment in your skin acts as a natural sunscreen preventing your body from absorbing vitamin D from the sun. The darker the skin, the more pigment in the skin which means more time in the sun is needed to produce adequate levels of this essential nutrient.

As you get your older your skin doesn’t produce as much vitamin D from exposure to the sun and your kidneys are not as efficient in converting it for use in the body.

5. You are experiencing aches and pains.

A vitamin D deficiency works against calcium getting to your skeletal system. Thus, being deficient might be the cause of some of your common aches and pains.

6. You sweat excessively from your head.

An excess of sweat is often one of the first and classic signs of a deficiency of this nutrient.

7. You live in a geographic location with long periods of darkness.

If you live in the extreme north or south, and there are long periods without sunlight or your exposure to the sun is limited, be aware that your vitamin D levels may be suffering. This might also be one explanation for the prevalence of certain conditions in certain geographic regions.

8. You are experiencing a decrease in mood.

A 2011 study stated that exposure to the sun and bright lights have a direct correlation to elevated mood levels. It found that the participants with the lowest levels of this essential nutrient were eleven times more likely to show signs of depression.