The human brain has no issue with storage because it has limitless space. But you lose the capacity to recall things as you get older because the brain is protecting you from information overload. You can, however, continue to train your brain to memorize the important things despite the threats of memory loss. Below are some secrets on how you can do it.

Here Are 8 Secrets That Help You Memorize Anything

“Knowing a little bit more about how your brain works can really help [you] to be a little more compassionate with yourself when it might take you a little more time than another [person] to learn a topic.” – Barbara Oakley

1. Use repetition to keep the information in your head.

The brain processes new information in the short-term memory but it can quickly forget if you don’t use the information repeatedly. According to theEbbinghaus Forgetting Curve, you forget half of what you learn in an hour. That memory reduces to 20 percent by the end of the week. So, you need to transfer this information in your long-term memory through repetition.

However, teaching yourself to memorize something for a long time by repetition must be properly timed. You can retain the information better with properly spacing your learning, such as when you’re studying a new language.

2. Teach what you’ve learned to someone else.

The Learning Pyramid is a concept that experts developed in the 1960s. It suggested that people could better retain memory at 90 percent if they immediately teach or discuss what they’ve learned to someone else. By teaching, you’re forcing your brain to concentrate. Since you’re also new at it, you’re likely to make some mistakes and work your brain to correct these mistakes.

No matter how focused you are on a lecture, for example, you need to immediately apply what you’ve learned to evaluate your interpretation. So, if you gain a new idea, run this by someone or perhaps write it down as soon as you can. When you hear yourself thinking out loud, you help your brain focus and concentrate better. As they say, practice makes perfect.

3. Study or do the heavy reading in the afternoon.

According to a study from the Brazilian Journal of Medical and Biological research, you boost your ability to memorize information if you schedule heavy reading activities in the afternoon. Most people perceive that they should study when they are most alert, which is usually in the morning. However, it’s the short-term memory that’s sharpest during the morning.

So, doing heavy stuff with your brain, such as studying or reading loads of documents, are best accomplished in the afternoon. This helps you memorize by retaining the information in your long-term memory. The experts said this technique is effective since there’s a shorter interval between your reading and sleeping time.

The role of sleep is vital to memory consolidation, as per a study in the journal Psychological Reviews. People who prepare for an exam by getting a restful sleep the night before, instead of cramming all night, gain more positive results in the tests. Sleep allows the brain to rest, especially when you’ve been reading and receiving information all day. Similarly, you benefit from taking short breaks in between reading because it helps your brain recharge.

5. Build a memory palace in your brain.

The Memory Palace technique, also known as the Method of Loci, has existed since the ancient Roman period. You might have heard of it before because experts recommend it all the time. It’s also all over pop culture and movies. This trick suggests creating visuals or spatial representations of things you’d like to remember in your head to associate it to something.

You may also use different cues like auditory (sound), olfactory (smell), gustatory (taste), kinesthetic (touch), and conceptual (ideas) to encode in your brain. Think of this technique as a virtual reality platform in your head. When you create an imaginary construct, you help your brain reduce its cognitive load, thus it uses its mental resources better.

6. Use the mind mapping technique.

The Mind Mapping technique also helps when you use it alongside the Memory Palace technique. Mind Mapping involves analysis and creativity, so your brain is so much more engaged and activated when it’s processing new information.

When you’re learning something, you usually take down notes in a much more linear form. But when you translate these notes like a map with different subtopics, you could get better at memorization, planning, brainstorming, and problem-solving. Use colors, symbols, drawings, and other attractive elements to create your mind map. These cues help to keep your brain on the alert.

Children are taught to learn Nursery Rhymes because these are powerful memory devices. Rhymes have familiar patterns that sound like music. This rhythmic pattern makes things easier to remember. The use of rhymes to help with memorization is an age-old technique. Cognitive scientist David Rubin wrote in his 1995 book, “Memory in Oral Traditions,” that when college students were made to listen to a ballad with rhyming words, they performed better in school.

8. Use the power of positive thinking.

Mature individuals are usually stereotyped as having poor memories. However, a research highlighted how the power of positive thinking can make older adults a lot less forgetful. The study’s participants, who were between the ages of 59 to 79, were divided into two groups. One was made to read a made-up article about the negative effects of memory loss. Another group read a fake story on memory preservation and improvement despite memory loss. 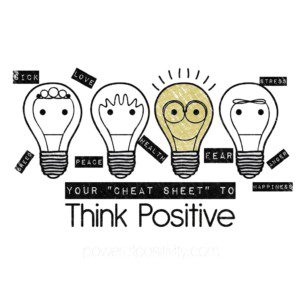 The participants were also asked to undergo a memory test. Those who remembered words and phrases of what they read were rewarded with money. Those who forgot what they’ve read were asked to pay money as part of the experiment. However, even with such a motivation, those who read the fake story on memory loss fared worse on the test that required them to memorize. Those who read the positive story scored better.

Experts said that if older people assume they are forgetful, they make their memory worse. But if people concentrate on ideas that reinforce their ability to improve their memories, they can reduce memory loss.