Schizophrenia is one of the most challenging mental disorders that makes it difficult for a person to understand what is real and what is not. They may not be able to think clearly, relate to others, manage emotions, or perform normal everyday functions. The most common type of this disorder is known as paranoid schizophrenia. With this mental illness, these individuals may see or hear things that are not actually happening, or they may complain of constantly being watched.

By understanding the symptoms of schizophrenia, loved ones may be able to prevent sufferers from hurting themselves, which includes drug abuse, alcohol abuse, suicide, and other issues caused by hallucinations. Here are 12 symptoms to look out for, according to psychologists.

Positive symptoms are those that are not seen in a healthy mind, and they may lose touch with reality.

On the other hand, negative symptoms occur when the illness disrupts normal behavior or emotions. These may be more difficult to notice because they appear as depression or even attention deficit disorders.

Have you noticed the person is suffering from hallucinations? This means that they are seeing or hearing events, people, or things that are not actually real. For the person with schizophrenia, the hallucinations appear to be real, and they do not know the difference. They may hear voices or see people who do not exist.

Separate from hallucinations, a delusion is a belief that is not real. Schizophrenic patients often believe they are being watched, harassed, harmed, or followed. They may believe in delusions of grandeur, such as that they are a god or superhero with exceptional abilities. They may also believe that they can see the future or that someone is in love with them them when they have never met the person before.

One of the things that make this disease difficult is that it can be hard to communicate with someone with schizophrenia. Speech may be impaired or considerably unrelated to the topic you want to talk about. Psychologists often call this word salad because schizophrenics piece together sentences with random words that often do not make sense.

With this mental illness, sufferers can be unpredictable according to psychologists. They may act silly like a child or get agitated over nothing. Behavior is not always focused or easy to detect, especially if they go silent. However, it is difficult for sufferers to perform routine tasks while in a state of disorganized motor behavior. You may see resistance to directions, lack of response, inappropriate or strange posture, excessive movement, or erratic behavior.

In many cases, patients do not take care of themselves as they normally would when not experiencing an episode. Due to trouble concentrating and hallucinations, many people with this disorder are unable to bathe because they are stuck in a fantasy state. However, in younger patients, it may not be as noticeable as a symptom since it could simply be growing pains or hormones causing trouble, but when combined with symptoms, it can be disastrous for a schizophrenic’s mental well-being.

It’s difficult for schizophrenics to get a night’s rest sometimes. They often have hallucinations that make it appear dangerous to go to sleep, such as in the case of someone watching or following them. They may not be able to rest for days at a time without medication. Schizophrenics may have certain triggers and take actions while in an insomniac state as well. One of the most common symptoms is moving furniture during paranoid and disorganized moments.

In other cases, schizophrenics may enter a state of catatonia, which is that they stop moving altogether. They may not speak for days and appear stuck in a trance. In other cases, they are unable to stop moving when upset and cannot control themselves.

In other cases, psychologists call this flat affect, in which the person’s face does not move when they speak, or they may use a monotone voice when they speak. These are negative symptoms that can be difficult to recognize, especially if they are able to speak. In younger patients, it may appear that they are simply depressed. However, they may not be able to engage in normal activities or speak to their friends as they normally did in the past.

In the early stages of this mental illness, schizophrenics typically stop wanting to hang out like normal with their friends and family. They may be experiencing depression, lack of motivation, and irritability due to mood swings and hallucinations. In many cases, sufferers do not understand what is happening around them and cannot decipher the difference between reality, which means they cannot socialize the same way as others.

However, with social skills training, patients can manage their delusions and learn skills to understand triggers. They can learn to recognize their hallucinations and develop ways to overcome these behaviors in order to function normally.

People with this disorder often have feelings of irritability, restlessness, hopelessness, fatigue, and lack of direction. They can feel confused after an episode or after they have taken certain actions while in a hallucination, and these thoughts can cause them considerable pain. Psychologists often noted suicidal attempts went up with schizophrenic patients after they came out of a psychosis state.

Many schizophrenics experience a lack of pleasure in everyday life that causes them to seek out an escape. If predisposed to this mental disorder due to genetics, it can be more difficult for the patient to overcome challenges. As symptoms get worse, they will likely withdraw from everyday activities with friends and family. They may seem unwilling to help themselves because they do not believe they have an issue.

Once schizophrenics are not able to focus, one of the earliest signs is that they are not able to sit still or absorb new information in school. As problems with attention grow more severe, younger patients such as teenagers may be unable to go to school. They may skip classes or stop going to school altogether. If students are involved in social activities or sports, they may withdraw as they lose more cognitive functions and slip further into the disease.

Many sufferers do not realize that they have an issue until they speak with a doctor. They may be able to recognize signs and symptoms later on, but at first, the hallucinations and delusions can seem so real that they do not feel there is a problem. They may refuse to take medication or flee in fear that medication is actually poison. When this occurs, it can be difficult to treat this disorder immediately.

Patients will likely have to undergo psychotherapy and cognitive behavioral therapy in order to recognize signs and learn skills to avoid slipping into hallucinations. However, if they have a problem concentrating or lack of memory skills, then therapy becomes more difficult.

Cognitive symptoms are detected when psychologists perform specific tests. Slower processing speed is one of those symptoms that have to be diagnosed. This makes it hard to lead a normal life and hold down a job, which can cause a lot of emotional stress for the patient. Many families do not realize that a child or teenager is suffering because the patient is not sure what’s happening either. This is why psychologists have the best possible method of discovering issues with processing speed and development.

Other Signs and Symptoms to Watch For 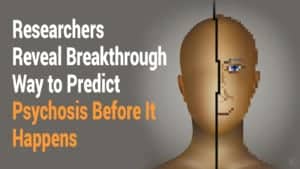 Final Thoughts: How to Help Someone with Schizophrenia

This is not a condition to self-diagnose or take lightly. In fact, a mental health professional conducts a variety of testing to rule out other conditions before issuing this diagnosis. They will also recommend counseling and other therapies to help relieve the severity of the symptoms.

If you or someone you care about receive a diagnosis of schizophrenia, then there are a few things you can do:

Most importantly, whether the patient is in the early or adult stages of this disorder, they should always have access to a mental health professional who can help them with a plan or routine to follow so they are less likely to fall into psychosis or a catatonic state.