Do you feel insulted, or perhaps your self-esteem has been reduced to flakes? Sometimes it’s the constant downplaying of your independence and dignity from your spouse that keeps your eyes wet most of the night. For a majority of people, emotional and mental abuse persists for extended periods as it doesn’t leave physical marks.

Mental abuse is often insidious, easy to cover, and can go undetected by close friends, family members, and even with the victim themselves. Unlike physical and sexual abuse, emotional abuse can be confusing. In this piece, we will discuss some of the commonly hidden signs of emotional abuse that should be clear tell-tales that you need to run.

If these sound like you, it could be time to make some hard decisions.

At the beginning of the relationship, when your spouse consistently communicates and checks-in to see how you are fairing, it may seem caring. The genuine concern could sweep your feet away, especially if you had been craving for an emotionally invested partner. Nonetheless, it’s easy for your partner to cross the line and turn these behaviors into harassment.

As time goes by, you may notice that your spouse intrudes on your personal space, threatens you when you don’t pick up your phone or text back immediately. A toxic partner will demand an ongoing account of your daily whereabouts and could even limit where you go and who you spend your time with. The relentless suffocation and harassment shouldn’t be confused for being concerned and caring. 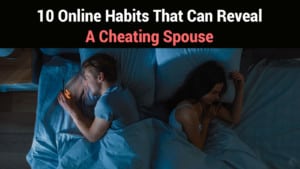 The abuser may have mastered the art of undermining your self-esteem and confidence in several ways. At first, it begins as “jokes” that shouldn’t move or anger you in any way. They continue to manifest into unrelenting and harsh criticisms that could break you into pieces. How do you spot this?

Toxic partners will ridicule your appearance, lifestyle choices, spending habits, and personal decisions. Your spouse may say out-rightly hurtful things about you and sugarcoat them as “jokes.” Sarcastic remarks have boundaries and shouldn’t make you feel bad about yourself.

You may also notice that your toxic partner turns down all efforts that go into pointing out these harsh criticisms and humiliation. Your spouse may bring up earlier incidences where they made these jokes, and you didn’t confront them, he or she could make you second-guess yourself or shut you off by saying that you are overreacting. You aren’t crazy: if you feel humiliated about a partner’s comment, it’s time to table your emotions and thoughts.

Do you find yourself in the middle of cold wars always? While it’s common to argue with your partner about various things throughout your relationship, it’s not healthy for them to withhold affection, sex, or finances when you don’t comply with them. You’ve probably noticed that your spouse becomes hostile, cold, and irritated based on their emotions.

Their love is selfish and mainly relies on your willingness to bend your thoughts on a specific subject. This kind of affection is typically manipulative and aims at controlling you. You will often find yourself walking on eggshells to avoid disappointing or enraging them.

If you find yourself always self-editing or second-guessing yourself around them, it means you’ve recognized the mental abuse in your unhealthy relationship. Nonetheless, you have taken up the job to comfort their emotions first, all the time, equating to emotional abuse. 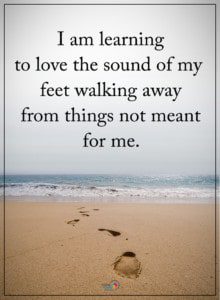 Take a few minutes to recall how your arguments resolve. Are you always taking the blame for everything that goes wrong in your relationship? How many times have you received an apology for a wrong done to you?

In emotionally abusive cases, you are probably taking all the blame, and your partner hardly takes the blame mantle; it’s always your fault. In some cases, when the blame entirely falls on your spouse, he or she becomes manipulative, turns down the responsibility of accepting the mistake, and puts it on others. You are continually arguing and settling down arguments with a toxic partner who will never admit they made a mistake.

Over time, this form of emotional abuse gradually grows, and you may start to think that there’s something wrong with you. You may begin to reason that you aren’t good enough to keep your spouse calm and that their behaviors are justified. You eventually view yourself as an imperfect party while they take the perfect mantle.

5 – Your partner makes you feel small

It takes years of building confidence in yourself, and no one should belittle you into thinking otherwise. Unfortunately, mentally abusive partners usually are into the habit of downgrading and putting down their partners, which can be less apparent in the relationship’s initial stages. According to therapists, this is a tactic used by the abuser to garner control and power in a relationship.

Pay attention to how your spouse reacts to your achievements and strengths. Most abusers will show little or no interest in your progress. However, they will exploit every weakness or vulnerability.

You may also note many disturbing comments that belittle you and your accomplishments. They may also compare you and your strengths to other people to make you feel inadequate. With more passing time, your self-esteem can slowly diminish to become a shadow of itself.

As earlier discussed, a toxic partner is naturally manipulative and gets to reveal himself or herself within the course of the relationship. A threat doesn’t necessarily mean that you will have a gun to your head. On the contrary, you will be forced to do something against your will despite knowing that the decision or move doesn’t make you happy.

Have you found yourself doing things that don’t make you happy so that you can maintain the smile on your toxic partner’s face? Does your spouse threaten to leave you if you fail to adhere to their desires and wants? Placing ultimatums in your relationship is a clear indication that you are in an emotionally abusive commitment where everything that matters depends on your partner’s wants and needs entirely.

As it should be, once you’ve discussed an argument and forgiven each other, the incidence should be buried. Easier said than done with most mental abuse cases. Emotional abusive people are always in the habit of holding and reviving grudges to maintain some sort of control and power in an unhealthy relationship.

You may notice that your spouse goes into defensive mode when they are in the wrong. They will quickly overturn facts through reviving past mistakes and incidences to defend their behavior and regard themselves as “good and justified.”

Eventually, you will find yourself arguing about the same thing over and over again, and nothing resolves completely. High chances are you will always take the blame to avoid dragging the argument.

A one-sided relationship is a dangerous relationship. It mainly involves one party putting all the effort, time, and energy into making it work and keeping the other happy. It’s never reciprocated. In many cases, the one putting in all the effort often is the victim of mental abuse.

Look at it more like a bully forcing you to make them happy and satisfied while they do nothing to make you happy in return. This manipulative tactic is common among people who get comfortable in a relationship once they know their spouse is already engaged in it. In the end, the victim loses a lot more, including themselves, into the one-sided relationship. 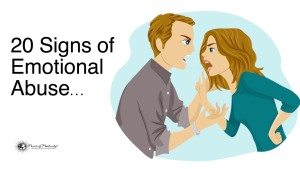 9 – You find yourself apologizing for things you haven’t done

Do you find yourself apologizing for things your toxic partner forcefully accuses you of? Mental abusers have a way of getting into your head, manipulating you, and coercing you into apologizing for something you haven’t done.

Here’s an example. You decide to catch up with a friend or workmate and fail to pick his or her call. Therefore, your spouse may conclude you are cheating.