A study at the University of Wisconsin confirms that meditation can alter brain structure. The practice results in fostering a brighter outlook and increased empathy. Of course, we already know that positive thinking and emotions affect health. Thus, meditation can contribute to overall wellness.

Richard Davidson is a trained psychologist and has practiced meditation for decades, He believes meditation can strengthen brain circuits connected with happiness and positive attitude, This is similar to how we strengthen muscles with exercise. Davidson and his colleagues produced scientific evidence that this form of mental exercise permanently changes the brain for the better.

The technology behind the study

Using MRI technology, researchers were able to view the left-sided anterior region of the brain. This section is believed to be associated with positive thoughts. The researchers documented increased activity in this region of novice meditators who participated in an eight-week mindfulness meditation course.

Davidson’s team discovered that the practice of compassion meditation also stimulates the limbic system (the brain’s emotional network). Thus, it increases positive emotions. Expert meditators with more than 10,000 hours of practice showed the greatest activity in the limbic systems and appeared to have permanently altered their brains to generate positive thoughts. And even outside of meditation, committed meditators permanently changed the way their brains operated.

Also, positive emotions and optimism are good for your health. Evidence shows that optimists take proactive steps to ensure wellness. On the other hand, pessimists tend to engage in harmful behaviors. Furthermore, research proves that individuals with a positive outlook have less hypertension, diabetes, and respiratory tract infections. Positive emotions also increase immunity and resistance to colds and flu. Additionally, they reduce cortisol, the incidence of stroke, and inflammation. And if that’s not enough, here’s an added bonus. Optimism increases longevity.

According to Health and Wellness by Gordon Edlin and Eric Golanty:

Advances in identifying the biological mechanisms of mind-body communication confirm that the mind can affect health in powerful ways. Joy, creativity, and contentment lead to a state of harmony, which we experience as bodily health and subjective well-being.

So, rest assured. Meditation isn’t just for monks anymore. You can use this powerful tool to strengthen a favorable mind-body connection. Indeed, you’ll support your health and watch the mind illuminate with positive vibes. 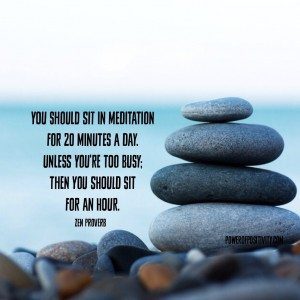 Carolanne enthusiastically believes if we want to see a change in the world, we need to be the change. Because she is a nutritionist, natural foods chef, and wellness coach, Carolanne encourages others to embrace a healthy lifestyle of organic living, gratefulness, and joyful orientation. Besides that, she enjoys connecting with other like-minded people from around the world who share a similar vision. (Natural News)

15 Things A Beautiful Woman Is Made Of (Besides Looks)

The pressure to be beautiful has been present for as long as the concept of beauty was known to humans. Physical att...

Not everyone is comfortable opening up about their affections and feelings. Men have faced social conditioning to hi...

Therapist Explains 5 Ways Couples Can Recover From a Fight

An occasional fight is normal in any romantic relationship. It can even make couples stronger and bring them closer ...