Have you ever tried meditation? When you know the benefits of meditation, you certainly will want to try it. Meditation is basically a way to focus on the present moment with your total attention. You avoid other distracting thoughts and focus all your attention on a single reference point. The reference point could be bodily sensations you are feeling, your breath or a mantra which is a single phrase or word. To meditate is deceivingly simple and an experience you will be happy you tried.
There are several styles of meditation. As a beginner, you must know yourself in order to know which style is best for you.

Now that you are aware of several types of meditation, you most likely are thinking, “Why should I meditate?” Let’s take a look at the many benefits of meditation, and you surely will have an answer to that question.

The Benefits of Meditation

A study was conducted by Jon Kabat-Zinn, Ph.D. of the University of Massachusetts Medical School to determine whether meditation decreases a person’s stress, anxiety and depression. 25 people participated in this study. 16 people of 25 who were taught how to meditate over eight weeks were happier and calmer at the end of the eight weeks. The remaining 9 people did not meditate during the eight week period.

All of the 25 participants’ brain waves were scanned three times during the eight week period. The scans of the 16 people who meditated showed their brains had a significant shift in the activity of their brain’s cortex. The activity shifted from the right frontal lobe which is the stress lobe to the calmer left frontal lobe of the brain’s cortex. This shift indicated that those who meditated had fewer negative effects of stress, anxiety and depression and were calmer and happier than those who didn’t meditate.

Another study was conducted by the University of Wisconsin. This study reported that increased electrical activity was found in the left frontal lobe after eight weeks of training in meditation. Since the left frontal lobe is more active in people who are optimistic, it can be assumed that a feeling of optimism was followed by the meditation training. Meditate and be optimistic. Being optimistic is certainly one of the best benefits of meditation.

If you practice meditation regularly, you can improve your mental focus. By practicing meditation regularly, you actually alter your brain function. You may be equipped better for quiet brain activity than people who don’t meditate.
A recent study conducted by Giuseppe Pagnoni, an Italian neuroscientist, discovered that meditation changes people’s brain patterns and also gives them better mental focus which may improve their cognitive performance.
Pagnoni compared a group of meditators to a control group of twelve people who never meditated. Using an MRI machine, he found that meditators’ brains were more stable in their ventral posteromedial cortex. Pagnoni believed the posteromedial cortex region of the brain is linked to mind-wandering and spontaneous thoughts. Pagnoni’s hypothesis was proven when the greater stability in the posteromedial cortex region of those who meditated was observed. The meditators were better able to rein in wild thoughts and were also better able to focus on a tedious task as well.

By inducing relaxation, meditation can improve your cardiovascular health. It does this by increasing the nitric oxide compound which causes you blood vessels to open up. This then lowers your blood pressure. This was one of the physical benefits of meditation reported in the Journal of Alternative and Complementary Medicine in 2008 that 40 of 60 blood pressure patients were able to stop taking medication to reduce their blood pressure when they meditated.

Not being able to get sufficient sleep, insomnia, can cause a person a number of serious health problems. Some people have tried to take sleeping pills to give them help in sleeping. Others have tried to stick to a regular schedule of hours of sleep. However, both of these methods tried failed and the condition persisted. When people tried mindfulness meditation, they were able to develop ways to help them with the consequences of their chronic insomnia and to avoid its nocturnal symptoms as well.

5. Your Risk of Acute Respiratory Infection can be Reduced with Meditation

The risk of Acute Respiratory Infection can be reduced with meditation. Influenza and viruses are illnesses many people suffer from. One of the best physical benefits of meditation is its making your immune system strong. Having a strong immune system can protect you from ARI. However, meditation has also been found to be useful in protecting you. In one research study, the results suggested that regular meditation may help you to reduce your risk of getting an ARI illness.

6. Meditation can Increase Your Tolerance of Pain

A therapy used to help people tolerate pain has been meditation. This is one of the outstanding benefits of meditation. The results of one study showed the pain ratings of people suffering from pain were significantly lowered after they meditated regularly.

7. Meditation can Help with Weight Loss

An eating disorder such as emotional eating is often the cause of obesity in both adults and teenagers. Even when not hungry, some people will eat large quantities of food causing them to be obese. It has been found that by including meditation into their routines they are better able to control both the conditions leading to their poor eating habits and the conditions associated with their poor eating habits.

8. Meditation can Increase Your Immunity

Meditation can not only maintain your immunity it can also strengthen it. Researchers in Infanta Cristina Hospital in Spain found that Transcendental Meditation increased the cell levels in the blood of people. This made them better able to fight off both bacteria and virus infections.

It was also found by a study conducted at the University of California, Los Angeles, that the genes which activate inflammation could be prevented to become active by meditation.

9. Meditation can Reduce the Severity of the Irritable Bowel Syndrome Symptoms

The Irritable Bowel Syndrome causes 10 to 15 percent of our population to suffer. Women are especially victims of this condition since more of them than men suffer from disorder. Mindfulness meditation can be used to help with the reduction of the severity of both the irregular bowel habits and the chronic abdominal pain of IBS symptoms.

The American Journal of Gastroenterology published a study in 2011 showing the participants who participated in a meditation had a reduction in their IBS symptoms. On the other hand, the control group of people who didn’t meditate had no reduction of symptoms.

Another study published in PLOS ONE was conducted by researchers related to Harvard University. The findings of this study showed a link between mediation and the lessening of a condition accompanying Crohn’s Disease, the Inflammatory Bowel Disorder.

10. Meditation Can Make You Happy

Meditate and be happy. One of the fantastic spiritual benefits of meditation is to make a person feel happy. The left side of your prefrontal cortex is the side that produces happiness. The right side of this cortex is the side that produces negative emotions. According to Ronnie Newman, director of research at the Art of Living Foundation, meditation decreases the negative emotions of the right side and increases the positive emotions of the left side. In addition, Newman has also claimed that meditation can increase a person’s acceptance and self-awareness contributing to his or her overall well-being. These are more spiritual benefits of meditation. 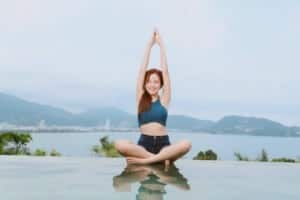 It is obvious that meditation can lead to your living a healthier and happier life. Meditation can reduce your stress, increase your immunity, reduce the severity of the IBS symptoms, help with weight loss, help you to tolerate pain, treat insomnia, increase your concentration ability and also have other positive effects on your life. Best of all, meditation can add to your happiness.