The beloved actor, comedian, and impressionist Jim Carrey went through his fair share of struggles before making it to the big screen. Born in Ontario, Canada, he began performing at comedy clubs in Toronto whenever his dad had time to take him. At first, his sketches bombed, and Carrey began to have serious life thoughts about whether he could make it as a comedian and entertainer.

Fast forward a few decades, and Carrey now enjoys a fulfilling career because he never gave up; he went from performing at open-mic nights to opening at tour performances for comedian Rob Dangerfield to starring in major motion pictures. His career really took off in 1994 when he starred in Ace Ventura: Pet Detective, The Mask, and Dumb and Dumber. He didn’t choose to listen to the people who doubted him. Instead, he worked on perfecting his craft.

Despite coming from humble beginnings where his family couldn’t always support his ambitions, Carrey found a way to keep his passion alive and turn his dreams into reality. Most people don’t know that he suffers from depression; he could’ve let his mind stop him from chasing his dreams as well. However, he finds an outlet in his job as an actor, and this helps him keep his mental state under control.

Everyone must jump hurdles in life to get where they dream of being, so in this article, we will go over some of Jim Carrey’s best advice in case you feel like giving up on your passions.

Here is some powerful life advice from Jim Carrey to always keep in mind:

“If you aren’t in the moment, you are either looking forward to uncertainty or back to pain and regret.”

Staying present in this life definitely doesn’t come easily; it takes constant reminders since the mind likes to run a mile a minute in any direction except its current location. Think of the brain like a GPS system. You have the power to tell it what direction to go. You can make yourself miserable by ruminating on the past or worrying about the future. Or you can empower yourself by remaining centered and calm in the present moment.

While the choice is yours, this doesn’t happen overnight, of course. It takes much practice and dedication for you to truly surrender to the power of the present. However, once you have mastered it, you will notice that you can control when you want your brain to map out a course for the future. You can control when you steer your mind in the opposite direction as well.

Studies have proven time and time again how mindfulness and meditation can improve your health tenfold. Remaining present in life can help keep your blood pressure low, improve your heart rate, decrease the risk of anxiety and depression, prevent heart disease, lower stress, and much more. Some studies have even shown that mindfulness meditation can literally change your brain!

While you don’t need to meditate to remain in the present moment, it can certainly change your life for the better. The decision to go through life mindfully is probably one of the best choices you can make, and one of the best pieces of life advice from Jim Carrey as well.

Most people who have achieved their dreams have walked on a path of failures before making it to the top. No one knows the best way to get from Point A to Point B; we all just try different methods and techniques before figuring it out. Life doesn’t come with an instruction manual. For most of us, trial and error provide the best way to achieve our dreams.

You can read countless stories about celebrities, entrepreneurs, athletes, authors, and others who went through hell before they made a breakthrough. Jim Carrey performed at countless open-mics where he didn’t earn a penny before he made it to Hollywood. He had to establish credibility and a name for himself before anyone would take him seriously.

Plus, failures teach us important lessons. They show us where we can improve and what we did wrong so that we can do things differently the next time. Humans don’t come programmed with codes like robots designed to carry out tasks and functions perfectly. Therefore, we have to learn as we go. No one who made it anywhere in life traveled in a straight line to their dreams; they zigzagged, went sideways, upside down, and even backward before they figured it out. They achieved their dreams because of the sheer drive to keep going even when life kept dragging them down.

The hope for a better future keeps us striving for more, and the failures we face along the path to success can shape our knowledge and understanding of life. If anyone ever tells you to give up, don’t listen to them. This piece of life advice can keep you on the path to your dreams even if you have to walk that path by yourself, as many successful people often do.

3 – Don’t depend on others for validation

“Your need for acceptance can make you invisible in this world.”

Jim Carrey’s life advice about accepting yourself can help you change a negative self-image into a positive one. If you constantly look for others for acceptance, you probably have low self-esteem since you cannot get that validation from yourself. In order to correct this, you have to change how you perceive yourself. 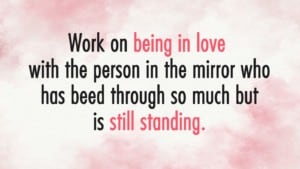 The more you depend on others for acceptance, the more you lose your own power. Decide that you don’t need anyone else to make you happy, love you, or give you attention. This will enable you to empower yourself. Allow yourself to become your own person regardless of what other people say. Break free from the shackles in your own mind.

People will talk about you anyway, so you may as well show them the person you want them to see. Show people the version of yourself that makes you the most comfortable, even if it makes them uncomfortable. It isn’t your job to go through life walking on eggshells. So don’t hide your true personality and beliefs for the sake of others; it’s your job to express yourself authentically and feel comfortable in your own skin.

Radical self-acceptance begins with the choice to see yourself in a different light. Forgive yourself for any perceived shortcomings or weaknesses. Celebrate your strengths and give yourself the love you seek, and acceptance will come much more easily.

“You can fail at what you don’t want so you might as well take a chance on doing what you love.”

This life advice goes along with learning to celebrate your failures and learn from them, which we discussed above. If you can fail at anything in life, doesn’t it make sense to fail at something that you actually want to spend your time doing rather than something you hate? Doesn’t it make sense to go after what we want in our short lives instead of wasting our time simply existing? People always want to have a safety net, but that sense of security can get thrown out the window in an instant.

People lose jobs that they’ve had for decades because the company decided to lay them off. Some people go to school for something their parents or colleagues think they would succeed at, only to get out into the real world and realize they wasted all that time and money. Most people hate their jobs, and since we have to spend the majority of our lives earning money, doesn’t it make more sense to do so in a way that brings us joy?

Go after your dreams, and don’t let anyone, especially the uncertain voices inside your head, stop you!

Final thoughts on this life advice from Jim Carrey

We think the above-mentioned life advice is some of the best out there. It will get you on the path to achieving your dreams and not caring what others think. Just remember that we all get to choose what path we take in life. So, always choose what makes you happy. Don’t settle just to appease others or to give yourself a false sense of security, because you will have regrets later in life. Even if something doesn’t work according to plan, you know you tried instead of wishing you did.

We leave you with a quote from Jim Carrey himself: “I really believe in the philosophy that you create your own universe. I’m just trying to create a good one for myself.”