There’s an ounce of truth behind most food myths. In fact, the most persistent beliefs regarding food still exist today because of these kernels of truth.

But food myths remain a myth for a reason. Even if these have been believed for years, there’s still no hard and positive evidence to prove they make a great impact on your health. So, what are some food myths that many people have believed for so long? Read on.

Here Are 15 Food Myths Many People Have Believed For Years

1.    Sugar and carbohydrates can cause obesity.

Some people avoid sugar and carbohydrates because of the belief that they can cause obesity. But you may deprive your body of the positive and beneficial energy it needs to help organs function healthily if you don’t eat foods with sugar.

Sugar turns to carbohydrates, which shouldn’t cause any problems if you consume it in moderation. The real cause of obesity is overindulging in foods with high sugar and high carbohydrates content that you don’t burn as energy because you don’t exercise.

Experts say that you should get 65 percent of your body’s nutritional needs from foods rich in sugar and carbohydrates. However, if you have high blood sugar, you need to be more conscious and practice care in the foods you eat.

Superfoods provide positive health benefits that boost your body’s antioxidants. These foods can prevent cell damage, which may lead to cancer. But these are really just regular foods that may have been hyped with all the science talk about omega-3s, anthocyanins, or glucosinolates.

The European Food Safety Authority reviewed evidence that indicated superfoods have no better health benefits than regular food. If you don’t eat a balanced diet, or fail to include fruits and vegetables in your meals, or resist regular exercises, then eating superfoods will not make you healthier.

An egg has 211 mg of cholesterol content in its yolk. Cholesterol contains fatty stuff that can clog the arteries, which can lead to a heart attack. However, an egg isn’t necessarily bad for the heart. Experts say in the journal Nutrients that healthy people can keep eating an egg a day and it won’t cause any problems.

The main foods that are really bad for the heart are those rich in trans fat or saturated fats. These raise the blood cholesterol levels more than the cholesterol from eggs. The American Heart Association recommends a 300 mg daily intake of cholesterol. But if you have a history of heart diseases and heart problems or if you’re over 55, then your daily cholesterol intake must not exceed 200 mg.

Some people don’t cook their vegetables because they believe that the heat will strip essential enzymes that aid in digestion. But experts say these enzymes are only necessary for the survival of the plants and not for the health of humans. The body efficiently makes enzymes regardless of the food you eat. You won’t be using up its supply if you don’t eat raw foods.

You can easily find food in fashion. People can be really creative with using food to create an image as if it’s an accessory. Fashion savants even make statements to relate food to fashion. If you’ve ever been to a fashion event, you’ll likely notice designer cupcakes at the refreshments table because these look attractive.

However, some people at these fashion parties will hardly touch the food – either because they don’t want to eat foods rich in sugar or because the foods are made from animal sources. In short, food exists to consume, not to use as a statement. You eat something because you know its benefits, positive effects, and nutritional value. Food is a health issue and not a trend.

6.    The calories you take in at night can be more fattening than your calorie intake in the day.

Physiologically, your calorie intake won’t automatically increase at night. It will count the same regardless of the time you eat. What can make you fat, however, is if you eat calorie-rich foods and don’t burn the energy because you’ll be sleeping in bed by then.

A study in the journal Nutrition Research showed that people who love to gorge on food at night will typically make bad choices because they’ll likely go beyond their daily calorie intake. Late eaters are prone to eat more than their body needs, which is why they gain more calories.

Thus, eating food during the night time can only cause a weight gain if you overindulge. However, if you’re careful to eat healthy foods, even if it’s late at night, then there shouldn’t be any problem for your health.

Many companies have benefited financially from juice cleanses that claim to help people lose weight faster. But when you’re just drinking juice to manage your weight, you’ll be depriving your body of the balance in nutrients.

Juice cleanses are typically low in calories hence they work for weight loss. But the results will not last long and won’t have a positive or healthy effect. Experts say there is no such thing as a quick way to lose weight. Instead, you need to get used to a healthy lifestyle where you balance your food intake with the right amounts of proteins, fats, carbohydrates, fruits, and vegetables.

Organic foods are grown free from chemicals like herbicides or pesticides. So, people are willing to pay more for these foods because they’re deemed healthier and safer than non-organic foods.

But a Stanford University study says that there is no significant evidence to show organic food carries fewer health risks to chemical exposure. These products are also not 100 percent pesticide-free.

The study, however, isn’t meant to discourage people from buying organic. You should be informed of the kinds of food you buy, however, because you could be paying more for something that doesn’t have any significant bearing on your health.

Cranberry juice apparently contains active ingredients that help the bladder wall ward off bacteria. Thus, many people believe it may help with treating urinary tract infection (UTI). But despite several studies, it’s still not enough to prove that cranberry juice is a good UTI treatment. Yet there’s also no harm in drinking cranberry juice if you believe it will give you relief and protection from UTI.

However, if you do get the infection, it’s always best to consult a doctor for the proper treatment. You could be risking your health if you simply rely on the juice to do its magic when you should be medicated and getting antibiotics for the infection.

10.  Drinking milk can increase congestion if you’re sick with a cold, cough, or flu.

Some people claim that drinking milk or enjoying dairy products when you have a cold, cough, or flu can worsen your condition. Milk allegedly increases the production of thick mucus so it’s harder to cough up and keep your lungs clearer.

According to BBC, this food myth has existed for centuries and it’s even found in Chinese medical writings from the 12th century. But researchers from South Australia conducted a study to see if milk really causes thick mucus production. They infected milk drinks with the common cold virus and gave glasses to the study participants, who had to record any symptoms and collect secretion samples.

The study revealed no significant impact on the quality of the nasal secretions. Participants who did not know about this food myth also did not log any cold symptoms. Thus, there’s no solid evidence for this food myth. Experts also say that milk may even help soothe sore and itchy throats, as well as provide calories that will boost the energy of a sick person.

Doctors in the past believed that spicy foods can cause inflammation in the lining of the esophagus, stomach, and intestines. Thus, they believed it could trigger stomach ulcers and other digestive problems. So, they would recommend a diet of bland food that does not necessarily treat the ulcer.

In fact, ulcers develop when bacteria attack the stomach. If you’re not fond of spicy foods, you could still develop this condition because of the bacteria called Helicobacter pylori (H. pylori). In fact, doctors say that spicy food can have positive effects on the stomach because it has capsaicin., This can stimulate the digestive tract’s mechanisms against the ulcer bacteria.

You might have been told to replace white sugar with brown sugar. But experts say there really is no difference between the two. In fact, brown sugar can still elevate your blood sugar levels, as well as raise your risk of obesity if you consume too much. 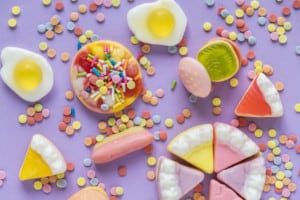 Unprocessed brown sugar provides no real benefit to your health. It might contain minerals like calcium, iron, magnesium, and potassium but these are so minuscule that it will not make any difference to your body.

Apples make for a healthy and filling snack. But no concrete evidence suggests it will help reduce your visits to the doctor if you eat one every day, according to Harvard Health. This, however, doesn’t diminish the health benefits of the fruit. If you love to eat apples frequently, then do it by all means. Apples are not only delicious and healthy, but also available anywhere and thus the most accessible fruit to have in your diet.

14.  Everyone can benefit from a gluten-free diet.

You can a number of gluten-free products in the market today. As such, you might not realize that going gluten-free will actually only benefit a select few – those with celiac disease and those diagnosed with gluten intolerance.