In 1962, a French scientist named Michel Siffre conducted an exciting series of experiments. The geologist sent his studies subjects into places of darkness for months at a time.

No clocks or calendars. No light except for one lightbulb subjects used to turn on and off when they woke up and went to sleep. There was also no human contact except for daily check-ins from Siffre’s research team.

While Siffre’s sole goal was to study the effects of isolation, he ended up, also discovered that humans have a biological clock. Siffre reached this conclusion when his subjects acted rather strangely: staying up for 36-hour periods and sleeping for 12 hours, for example.

Here’s the kicker: When participants finally learned that the experiment had concluded, many believed they still had weeks – even months – to go.

So here is the conclusion. Darkness has an enormous impact on our bodies and minds. The word of Siffre and a few others form the basis of chronobiology. That term explains the field of biology examining the effects of solar- and lunar- activity on living beings.

In this article, we’re going to discuss what darkness does to the mind and body, including early research. Undoubtedly, you will find this quite fascinating.

The circadian rhythm, our “internal clock,” “body clock, sleep-wake cycle,” or something similar term, is a biological phenomenon. It describes the daily cycle’s behavioral, mental, and physical changes.

It is thought that the circadian rhythm was first discovered in the 18th century by the French scientist Jean-Jacques d’Ortous de Mairan, who demonstrated the presence of an internal sleep-wake cycle in plants.

A common phenomenon concerning a lack of light and human behavior is the former’s effect on mental states. A mental health condition called Seasonal Affective Disorder (or – rather appropriately – ‘SAD’) affects approximately 6 percent of the U.S. population–around 19.6 million people.

SAD diagnoses are most common around the late fall and early winter months when there is relatively little sunlight. (Although it isn’t unheard of for people to develop SAD spring and summer.)

Common symptoms of SAD include agitation, changes in appetite or weight, difficulty concentrating, feelings of hopelessness and guilt, insomnia, low energy, loss of interest in activities, and thoughts of death or suicide.

In a 2015 study of Swedish and Brazilian workers, researchers found that Swedes are more likely to suffer from insomnia and depression. The scientists posit that this outcome stems from Sweden’s relatively limited exposure to natural light.

Factors that may increase the risk of SAD include:

In reality, these statistics understate the problem. Many people – perhaps even yourself – will attest to feeling the “winter blues.” We may not ever be diagnosed with a disorder, but it nonetheless affects us.

Take, for example, a 5-year study of nurses in Anchorage, Alaska. Per the authors, “Medication errors were 95% more likely in midwinter than in the fall.” The study supports the notion that extended periods of darkness can interfere with normal cognition. 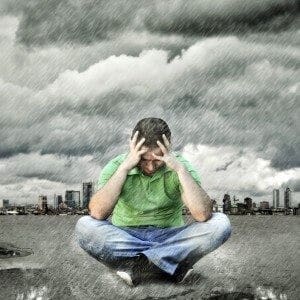 Have you ever walked or stayed in a dark room in mid-day? It’s weird. Here’s another question for you: have you ever worked in a dark office space or some other working environment and found yourself sicker than usual? It happens – and it happens often.

Sick building syndrome is also known to some in the business world. Office workers who sit in darker areas report more instances of sickness than those who aren’t.

A primary contributor to sick building syndrome is the presence of microbes in air ducts, ceiling tiles, and pretty much any other crevice. Bacteria needs the darkness and nutrients and moisture (e.g., humidity or standing water) to live. Unfortunately, buildings and other structures that are darker tend to be safe havens for microbes and other indoor pollutants.

It must also be mentioned that we tend to get sicker at night (it’s not just “in your head”!)—the reason: our circadian rhythm regulates sleep and our immune system.

The inflammation often catalyzes or exacerbates multiple symptoms of illness, including congestion, fever, and sore throat. “You tend to experience [more severe] symptoms … when your immune system kicks into the highest gear, which is normally at night during sleep,” adds Dr. Smolensky.

“Darkness is like a mirror: It shows you what you don’t want to see.” ~ Anoula Sifonios (Source)

Many of the spiritual traditions emphasize the importance of darkness for holistic health and, more importantly, seeing into the nature of reality. We see this in the Taoist yin and yang to monks who cave dwell for months at a time.

Specific lineages of Tibetan Buddhists spend an extended amount of time – 49 days – in dark retreat. According to followers of the traditions, dark retreats are conducive for two after-death attainments – the realization of the rainbow body (Google it) and navigation of the Bardos (the transitional states of consciousness following physical death.) 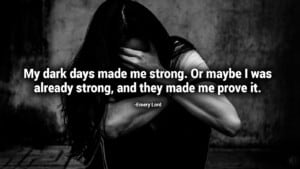 Anoula Sifonios spent nine days in complete darkness as part of a meditation retreat. She says (as do many others who undertake darkness retreats) that submersion in darkness produces imagery that originates from the mind. What kind of images exactly? “…geometric patterns, tunnels, buildings that are carefully carved and decorated, symbols from traditions you don’t know…[it’s] the subconscious mind…emptying out.”

Psychologists attribute this stream of consciousness to the near-constant influx of visual stimuli we experience. According to research conducted by the company RescueTime, the average person spends an average of 3.5 hours a day on their smartphones. The top 20 percent of users: 4.5 hours.

Not to mention the steady dose of television that most of us get – about 35.5 hours per week, or just over 77 whole days out of the year.

So, did Sifonios experience the ultimate digital detox? Sure. But that’s perhaps oversimplifying things. Because after emerging from the darkness, she needed less sleep, had more energy, and underwent healthy physical and mental changes.

Final Thoughts: Making Sense of the Need for Darkness

Okay, so is darkness “good” or “bad” for us? Well, it depends on the source, apparently!

However, science is rather unambiguous concerning adequate exposure to both dark and light. Sunlight is paramount for life, not just of human beings but of all species. Darkness is equally essential for health, both mental and physical.

However, the mental health benefits of darkness must be addressed.

It’s rather easy to dismiss any spiritual talk as too subjective and “out there.” But given our obsession with needing to “stay busy” – and our dread of “boredom” – overlooking the potentially enormous benefits of darkness immersion is a mistake.

Related Items darkness how darkness impacts your body impact of darkness on your body and mind your mind and darkness
Power of Positivity uses cookies to give you the most relevant experience. For more information see our Privacy Policy.
Continue
Manage consent